Final Fantasy Tactics A2: Grimoire of the Rift Retroview

A Tome Worth Traversing

Final Fantasy Tactics A2: Grimoire of the Rift is not a game that everyone will like. Its core narrative is not particularly interesting, its visuals will not ensnare those who demand eye candy, and the random aspect of its equipment acquisition can be frustrating. Its tactical core is more than sound, however, and will amply reward those who care to make investigate it thoroughly. Negative aspects it may possess, but the positives outweigh them conclusively.

Similar to Final Fantasy Tactics Advance on the GBA, this game begins with a minor from Earth being sucked into a storybook. This lad is named Luso, and he takes to being in front of a gigantic rampaging bird with great aplomb, conveniently finding himself in the presence of a veteran fighter named Cid. After a crash course in how combat proceeds, Luso is inducted by Cid into the ranks of his clan, of which the youth enthusiastically proceeds to become a vital part. Finding a way home is his eventual goal, but Luso is not preoccupied by any melancholy feelings, and thus is an agreeable protagonist, even if his story is not very interesting.

Outside the central narrative many interesting aspects of Ivalice are spotlighted in the form of the game’s many sidequests, fortunately. Not everything is a winner, but the tales of an outsider group with principles secretly trying to conquer the continent, a sword wielder not ready to accept death, and the amusing incompetence of a newspaper reporter are not alone in being entertaining.

The combat and skill system drive Grimoire of the Rift, and do so excellently. Most battles pit six members of Luso’s clan against a like number of enemies, whereupon every participant takes a turn based on agility. Not moving or taking an action will allow the next turn to arrive faster, and unlike most other RPGs, magic points charge each turn instead of being full at the beginning of a battle. The turn order is visible on the top screen at all times, providing a handy means of monitoring events, and the player’s characters can be reequipped after looking at the enemies but before putting them into a battle. User-friendly and very effective, battling enemies is captivating. 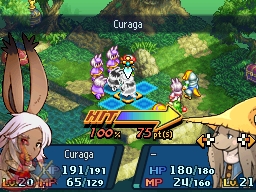 Well, that’s a stupid action to take, with only a few stupider courses of action available.

The great variety of the quests available in Grimoire of the Rift is another positive aspect. Missions in which every enemy must die are prevalent, but at other times neglecting the opposition and inspecting certain locations will be necessary. Several battles with AI opponents who are seeking to land the finishing blow against a quarry are also interesting, and even some of the fetch quests are more tantalizing than their ilk in other games. The ability to dispatch clan members to accomplish less-interesting assignments without additional player input is another welcome feature.

The Judges and Laws of Tactics Advance are mostly gone in Grimoire of the Rift, showcasing a heavily altered version of the much-criticized legal system. A single Judge follows Cid around, and enacts Laws that his clan will reap benefits by following. Following the Law prescribed for any given battle will allow the player to have a privilege, from increased movement range for every character to immunity to certain status ailments. The privileges are earned through a number of clan trials, and are often very helpful in dispatching the opposition. A single violation of whatever Law is in effect will remove the privilege and disallow the restoration of characters who have fallen in that battle, but carries no permanent penalty. The Judge and his Laws still have the capacity to annoy, particularly when the Law is something bothersome such as not attacking enemies from behind, but the rewards for following it make the system mostly beneficial.

Characters in battle have access to two sets of commands, those of their current class and those of another class from which they have mastered abilities. They also have two passive abilities, one that stays in effect all the time (such as being able to equip shields regardless of class) and one that activates depending on battle conditions (such as automatically evading magic attacks). This plethora of available abilities is learned using the same system as Final Fantasy IX and the first Final Fantasy Tactics Advance, in which pieces of equipment carry specific skills that can be learned by accruing Ability Points to let a character learn them. It can be quite addictive to have characters learn as many skills as possible, and the game is kind enough to make it apparent when a character has learned something new. Classes are mostly race-exclusive, and while there is a little branching out between the seven races of Grimoire of the Rift, it will be necessary to have someone from every species to access the entirety of the options. 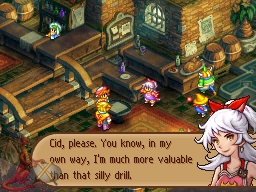 Adelle IS pretty good, plus she’s a mandatory unit, so building her up would be advised.

The equipment in Grimoire of the Rift is acquired via a Bazaar in which the player supplies ingredients to create new weapons and armor that can subsequently be purchased. This method is somewhat time-consuming, but also quite entertaining, and sifting through the ingredients to produce new equipment is quite diverting. As the game progresses, the lists of available equipment will become very large, but the effects of all items are displayed and the inventory system is kind enough to show whether the player already has any of what is currently being viewed, ameliorating what could have been a terrible aspect of a gigantic store supply. Certain pieces of very good equipment must be made repeatedly, as they cannot be mass-produced, but everything else has been made as efficient as possible given the mass of hardware that is required to teach the enormous quantity of skills within the game.

Square Enix barely upgraded the visuals from Tactics Advance for Grimoire of the Rift, meaning that almost all of the game could have been on the Game Boy Advance with no detrimental effect to its look. This criticism is not derogatory of the game as a whole, but some additional graphics sheen would have made it more attractive to a large audience. At least the music is captivating, with a good variety of pleasing compositions from Hitoshi Sakimoto and the Basiscape stable. Some are imported from Final Fantasy XII, but that does not dilute the auditory satisfaction derived from hearing them.

Plowing through the core story could conceivably be done in forty to fifty hours, but delving deeper into Grimoire of the Rift is practically mandatory, and the sheer size of its voluntary content allows for over one hundred hours to be spent in Ivalice, with a few extra missions becoming available only after the game has been beaten. Individual battles can be challenging, but there is no such thing as a Game Over screen in this game, meaning that no crippling disasters will befall the player. Players seeking a challenge can create one easily enough, but most of the game will not daunt anyone with tactical experience.

The mere presence of a Judge in this game is polarizing, and his constant rules can be annoying. The worst tendencies of the Law system have been eliminated, however, and using the Judge correctly can net substantial rewards. Final Fantasy Tactics A2: Grimoire of the Rift is an immensely worthwhile tactical title that provides ample reason to spend days in its company, and while not without its flaws, the package is one of the best strategic offerings on the DS.