A child’s life has been irrevocably changed. Will he grow up bitter and twisted from this incident or become a shining example of good? What about neither? Those decisions, and many others, are in the hands of the player. A plethora of choices await those who play out the life of this boy. Originally released on the Xbox, the game was remade and released on both the Xbox and PC as Fable: The Lost Chapters, with new content not included in the original Fable game. This review is based off of the PC version of Lost Chapters, which takes a solid base and builds upon it until the game’s quality stands out amongst the crowd of mediocre PC RPGs.

It is time to gear up for battle. The player has quite a few choices as to where they’d like to focus. Experience is gained in a variety of ways, through actions such as eating specific foods, or by the usual case of beating up enemies. A combat modifier increases how much experience a player gains, which rises as successive strikes on the enemy land without the character taking damage. This experience could be one of four varieties: strength, skill, will, or general. It can then be spent to level up different skills within the first three categories. Strength dictates how strong and healthy a character is, skill determines how fast and accurate a character is, and will is used to purchase or improve magical abilities. When upgrading a specific trait experience from that category is used first, and then the general experience pool is drained. For example, when increasing Guile, first skill experience is drained, then whatever cost is left over is subtracted from general.

Fighting enemies themselves requires a lot of pointing, clicking, and hotbar mashing. First, a player can lock onto an enemy if they so choose. While this is good for aiming a bow and one on one fighting, this tends to be less effective when fighting groups. The Hero can equip both a melee and ranged weapon, but only one can be used at once; bare fists are also an acceptable weapon. Clicking the left mouse button allows the weapon to swing, or fire, and holding down the button will charge up a ranged weapon. Magic can be activated by holding down the shift button and clicking the left or right mouse button, or can be placed on the hotbar. The hotbar, activated by the number keys 1-9, are actions which can be activated quickly. This is especially important for potions, or area-effect magics such as Enflame. The mouse, aside from dictating attacks, also controls the camera angle. Looking up or down or a quick spin backwards is all accomplished using the mouse. The movement buttons can either be set to the arrow keys, or the WASD block. When enemies are defeated, experience and items pop out, and while the Hero needs to touch the items, experience can be sucked closer by holding down the shift key. While it may seem a little complicated through explanation, there is a tutorial at the beginning of the storyline which allows the player to practice these different forms of attacking. The battle system is straightforward and allows a great deal of customization, making the game a pleasure to play. 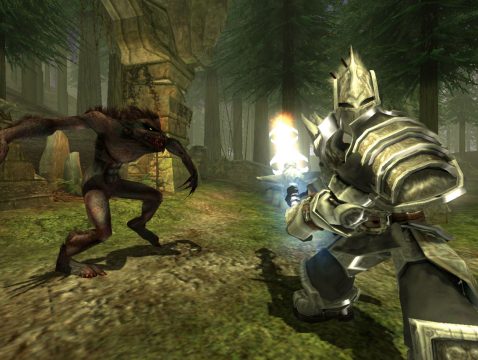 The visuals are another novel facet of Lost Chapters, because a character is always changing. Like many PCs, how smooth the visuals will be depends upon the power of the computer, but there are options to change how intense the graphics are. Committing evil acts will make the character’s skin turn sallow, and they will hunch over; those truly evil will gain large horns, a buzzing cadre of insects, deformed hands and feet, and cloud of red dust. Characters that are strongly moral stand taller, their skin glows; when they become truly angelic, they will gain a double-ring halo, small ethereal butterflies, and a bright overall glow. Magic users will find that they do not bulk up as much as physical characters. As the character ages, his hair begins to turn grey and they wrinkle. For those who mix it up in melee, they will come away with a few scars, whose size and shape will depend upon which creature inflicted it. Balverines, for example, always give a scar that is three parallell lines, which can be on the face, chest, or back. Haircuts, beards, mustaches, and tattoos can further customize a character. Attractiveness and Scariness are two stats which all of these physical changes will affect, and change how NPCs relate to the Hero. The rest of the game is equally entertaining and does change over time. If townspeople are killed, they don’t get immediately replaced but over the years the area will repopulate. There is a variety of different environments to explore and a decent selection of enemies to pound in these areas. The music certainly helps set the mood in these different scenes, but outside of their specific context don’t stand out particularly. Fable, if nothing else, is able to set the mood, quickly sucking the player into the game and keeping them entertained for the whole ride.

How difficult Lost Chapters will end up being depends upon the path the character takes when it comes to skills. Archers will have a tougher time with levels that involve hordes of enemies, which will users will laugh their way through. Strong melee characters will blast through one-on-one combat but may find it frustrating to fight fast, moving, or ranged enemies. It may seem that a balanced character may do best, but they often end up falling behind those who specialize and then plow through the tougher areas. This, not surprisingly, ties directly into the completion time of the game. Those who skip all the storyline scenes, know exactly where to specialize, and race through the game could be done the main storyline in less than 10 hours. Those who experiment, take time to complete the side quests, or get stuck for whatever reason will find that their clock can tick as high as 20 hours. Most players will fall between that number, and subsequent playthroughs will naturally come faster than any initial foray.

The interface is a breeze to navigate and fits well with the game. Items can often be used straight from the menu, or their icon can be dragged onto the hotbar where they can be activated whenever needed. This is especially handy for healing items and expressions. As a handy bonus, there are three extra hot buttons — F1, F2, F3 — which change as the need arises, with a special emphasis on the useful F1. For example, whenever the character comes to a location where an item can be fished up, the F1 will automatically change to a fishing pole, or a spade where digging is available, providing the Hero is carrying these tools. The menus also include important information like a Hero stat sheet, experience levels in the various skills, various video and audio options, and other important information, all divided in a very clear and logical manner. Information is always easy to find, and the interface helps move along the game at a quick pace. 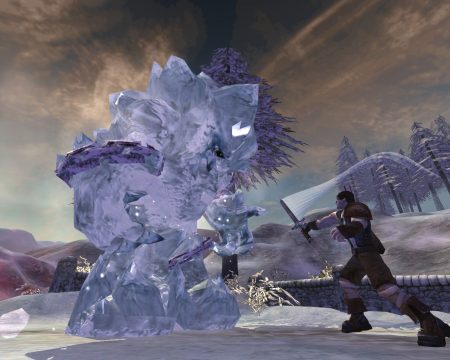 Few people could suggest that Lost Chapters is not very original. The battle system, while using some traditional ideas, allows the player to customize to a large extent, meaning every playthrough is different. The story also stands up to repeated playthroughs, despite the fact that after the first playthrough the surprise is gone. Many players will find that they will often look forward to seeing these plot twists, if nothing else, a second time. While the main storyline itself is short, the sidequests expand a lot on both the character’s alignment and his motives for being a hero. What choices the character takes will affect the storyline in minute ways; whether or not they choose to kill a character or let them live may affect the rest of the Hero’s life. The story supports the originality and vice versa, and the solid meshing of the two is something few games accomplish.

Though quite short, those who pick up Fable: The Lost Chapters will not be disappointed — unless, of course, they were expecting a long and epic game. With so many ways to play the game and customize a character, the short completion time works to the advantage of those who want to try out different characters or alternative storyline choices. Coupled with the ability to change many video options, many will be able to pick up this game and enjoy it to the fullest. Even those who already played the original Xbox version may find themselves wanting to pick up the new version to see how the additional storyline and little changes add to the game. For those who haven’t tried it yet, welcome to a truly impressive game.