A Tale of Corporate Thievery

It is truly a depressing state of affairs when a company can legitimately push a defective product into a market where the consumer has no recourse to return the mostly useless merchandise. If some store sells spoiled meat, cracked mirrors, or pencils without lead via misdirection or subterfuge, one can turn to the Better Business Bureau for help. If the faulty product was actually a mistake, then one can reasonably expect to see either cash back or a replacement under almost most circumstances. Unfortunately, the PC game market works exactly under the paradigm companies can routinely peddle their nonfunctional wares with promises of “patches” replacing apologies or refunds. The release of Heuristic Park’s Dungeon Lords: Collector’s Edition represents not only a textbook example of a company offering an unfinished and unplayable game but also, tragically, an example of the questionable ethics of forcing the gamer to purchase the means to fix the broken product. In order to understand how Dungeon Lords in general, and the Collector’s Edition in particular, became such a travesty one must understand the series of events leading up to and beyond the game’s release.

Plagued by delays from the very beginning, Dungeon Lords was not released in its first unplayable form until May of 2005. Judging by the finished product which hit shelves, version 1.0, one can only imagine that the programmers were trying to cobble the game together from scratch during the four months of delays. The game was riddled with major bugs which made story-critical quests impossible to complete, many of the character skills were never implemented, towns were devoid of NPCs and furniture, character customization was nonexistent, the Auto-Map feature was missing and, in general, the game covered in the instruction manual and the actual game were worlds apart. It would take three patches before the Auto-Map feature, a rather critical function for a game predicated on the idea of exploring dungeons, was added and four patches before players could actually choose the majority of character skills featured in the instruction book. The fifth patch ended up being transformed into the Collector’s Edition, with the differences between it and the original game, additional bug fixes aside, being little more than half a dozen new quests, a new class, and more treasure chests. Of course, these treasure chests were primarily added in the secret rooms of the original game, where such rooms were actually devoid of any secrets before the Collector’s Edition. So the Collector’s Edition is not so much adding new material as it is finishing the game.

This background information is important to understand in order to get a feel for the context of Dungeon Lords. For the poor planning and sloppy design are not merely limited to programming errors and general laziness — rather, the fetid mediocrity is an omnipresent component of the entire game. 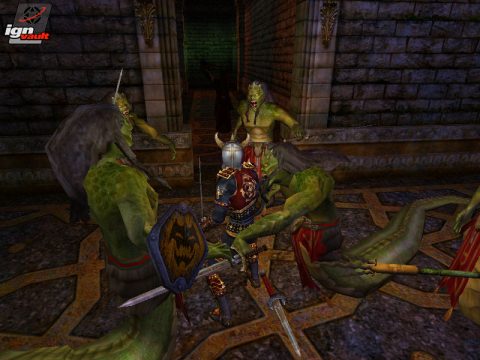 Just some of the 100% unique monsters that roam the dungeons. *cough*

Take, for example, the battle system and general interface of Dungeon Lords. The basic controls operate along similar lines to other PC Action RPGs out on the market, with the WASD keys moving the character around and the mouse controlling the camera. While featuring four separate magic systems and a robust diversity of weapons to choose from, the game essentially boils down to hacking and slashing some generic 3D monster models that look like they were lifted from the 1980s version of the Dungeons & Dragons Monster Manual. This is not so much the primary problem in and of itself as other PC Action RPGs, such as the Diablo series or Fable, offer the same sort of gameplay with clearly superior graphics. Rather, the primary problem is that gameplay in Dungeon Lords is just plain boring. Enemies are almost completely randomly determined and constantly spawn at a rate that is thankfully somewhat controllable in the game’s Settings tab. Regardless, the default settings will make traversing even the three desolate cities in the game a dangerous affair in the beginning, with endless waves of thieves, rabid rats, and pit vipers appearing out of the ether and onto sidewalks, and the encounters remain a nuisance even beyond the point where they pose any challenge. It matters not to the lowly piranha or cave bat whether you are a level 1 greenhorn with more fingers than hitpoints or a level 25 walking catastrophe garbed in the vestures of felled demigods; walking the streets of Fargrove or wading in the puddles outside of town subjects one to constant bombardment by suicidal wildlife at every level.

Interaction outside of clicking the left mouse button over and over is limited to… clicking the left mouse button over and over some more. As one would suspect, the near-constant bloodbath which necessarily follows in the wake of the main character also leaves behind a trail of items and equipment like some sort of twisted Hansel and Gretel. Unfortunately, the game handles new equipment under the assumption that the character is an amnesiac or a complete moron. It matters not that the sword just acquired is identical in every way to the thirty other swords with the same item graphic, or that the character may be a seasoned fighter that equips the very same sword in battle against the forces of evil — the swords have to be identified either with a skill inaccessible for the majority of the game or identified individually with a fee at a local store. Since Dungeon Lords features absolutely nothing remotely close to convenient in the realm of exploring or exiting dungeons with the intent to finish at a later date, one can expect the main character’s inventory to remain filled with potentially useless trash for long periods of time. Indeed, one can hardly even save the game with any sort of confidence, as it still appears to be completely random whether the game will actually load a save file. There is nothing more humiliating than spending half an hour wandering through a virtual landscape devoid of anything of interest only to find that the game cannot load the past three save games because there happened to be a tree near the character when the game was saved. 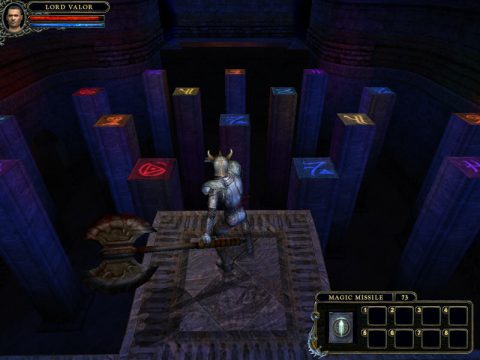 Another successful student from the Cloud Strife College of Oversized Weapons.

The other important aspect of gameplay outside of battle is management of one’s character, which is something neither the game nor the instruction booklet offer much help in. At character creation, the player gets to choose a number of things which turn out to be entirely useless aside from in an aesthetic sense. The reason is that character progression is dominated by purchasing ranks in Skills or additional points in the various Attributes rather than in any sort of exclusive choice. While there are seven races and over thirty different classes in the game, the player only gets to experience a total of five classes over the course of the adventure with the majority offering nothing but “learning bonuses” on the Skills rather than an exclusive set of Skills. Since Advancement Points, the “currency” of Skill and Attribute purchases, accrue on a 1:1 ratio with experience points gained from slaying monsters, it becomes a rather elementary task to acquire proficiency in everything. Want to be a Death Lord clad the heaviest of armor and weapons while still wielding the most powerful magic in the game? All it really takes is time and patience, both of which are absolutely necessary to have in abundance in order to slog through Dungeon Lords anyway.

Time and patience are necessary because the Dungeon Lords never makes any attempt to encourage the player to finish the game. The plot from the esteemed D.W. Bradley leaves much to be desired: things such as plot twists, engaging dialouge or even basic foreshadowing. As foretold in the stars, the main character is fated to collect five Relics of Power to stop some Big Bad Evil Guy. Assuming one does not quit out of disgust, that is exactly what happens. The five Relics are stored deep in the heart of various evils because, apparently, the absolutely brilliant and nigh-omnipotent wizard whom has vowed to keep them safe believes that whenever any legitimate threat to fate of the world rears its ugly head, some random knucklehead has to fight his/her way through forty hours of monotonous dungeons before they can save the world. Of course, the fact that the player character can resurrect themselves a potentially infinite number of times at a relatively low cost when everyone else in the game world dies permanently might lead one to think that if the wizard was truly intelligent, he would be falling over himself to hand over the Relics at character creation. On the other hand, questioning the logic of a game that was intentionally sold in an unplayable form for months after its initial release is a bit counter-productive.

Ultimately, the sad tale of Dungeon Lords is not so much how a generic fantasy game escaped Beta testing or any form of intelligent design, but rather a sad tale of lost money. The poor early adopters and/or suckers duped into purchasing such a crippled piece of vaporware not only missed out on getting entertained with their money, they were further insulted by the release of the Collector’s Edition, which can only be described as a desperate attempt to recoup the cost of production by repackaging material that should have been in the game on Day One. If only the game in question was a tiny bit bearable perhaps this convoluted pyramid scheme would have been worth at least a sideways glance. As it stands, the only moral of this tragedy is that purchasing a PC game without checking the reviews first is a complete crapshoot in which the House often wins, leaving you with only some fancy coasters and a bad taste in your mouth to show for it. “Buyer beware” does not even begin to cover the situation anymore.