Victory is Best Celebrated Without Pants

Hybridization is becoming the rule instead of the exception more often in the realm of RPGs. What we are starting to see is a genre shift that is becoming far less traditional in structure. This is not necessarily a bad thing, as it has brought us many unique role-playing experiences over the last few years. An unlikely match of genres is RPGs and tower defense. While it sounds a bit far-fetched, this industry has shown us that anything is possible with a little gusto and TLC. Enter Dungeon Defenders, an action RPG/tower defense mash-up that has no qualms about its quirky design and difficulty. The question then begs to be answered: how well does this combination work?

The story of Dungeon Defenders begins when a group of wannabe heroes wish to become like the warriors of old. In the land of Etheria there was once an immortal group of beings called the Old Ones, who protected the realms from danger by thwarting evil across the land. Fearing that their powers would be used for evil, the Old Ones locked away their abilities and sealed them within the Etheria Crystals. Enter the offspring of the Old Ones, who spend their days bored out of their minds, seeking adventure. While performing their mundane duties, the miniature heroes unleash an ancient force that should have never been meddled with.

Let’s get right to the point: Dungeon Defenders‘ plot is entirely filler and not particularly memorable. In fact, the plot is so minor that players will encounter it every four or so stages. The plot is pure exposition to establish the game’s mechanics, but it lacks any sort of entertainment value that be could provided by the byte-sized heroes. The plot is mostly harmless fluff, but all things considered, Trendy Entertainment could have tried a bit harder to make the story a bit more amusing or even memorable in some way. 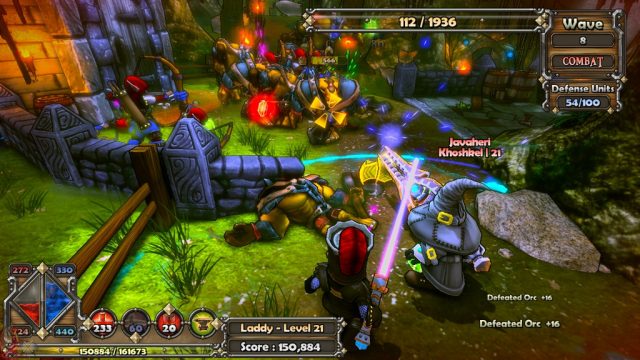 Defenders have no need for pants.

As stated, the minimal plot is what sets up the game’s mechanics. Players must choose a class from one of the following options: Apprentice, Squire, Huntress and Monk, and use their unique traps to defend the Etheria Crystals from various mobs of evil-doers. There are two phases of play: in the Building Phase, players are able to survey the area and set their traps accordingly, repair existing traps, or upgrade them to solidify their defenses. Studying one’s surroundings is critical to survival as one misstep can cause tons of carnage from the hordes. The only way to summon traps, perform repairs, and make upgrades is through mana, which can be acquired from chests or collected from dead enemies. Since enemies attack in multiple waves, players must use their mana wisely during that phase, as they will have to wait until combat happens to replenish their mana.

Once players are satisfied with their setup, the game moves into its Combat Phase where the game becomes more of an action RPG. Players rush around the map repairing and upgrading their traps, but they also must jump into the fray using their unique personal abilities to help fend off foes. Each class has its own weapons and armor, as well as special attacks that help push back floods of oncoming enemies outside of the traps. Apprentices, for example, can use Mana Bombs to push mobs of baddies backwards and also use their basic attack to rapidly shoot down flying baddies. Dungeon Defenders‘ gameplay is fast-paced and frantic: in its insanity it is easy to die if one is not careful. Should death happen, players must wait six seconds to respawn, and within that small window, anything is possible. As enemies are destroyed, the player gains experience from both personal and trap related kills. When a level up occurs, one can allocate points accordingly to beef up health, defense and damage to both the player character and traps.

There’s something incredibility exhilarating about the carnage of enemy carcasses in Dungeon Defenders. Be it Slice-N-Dices, Lightning Towers, or Bouncer Blockades, it’s amazing to see how much damage has been dealt within specific areas of the map. There’s an immediate joy when an arrangement comes complete together, as well as horrible frustration when a plan falls a part. The gameplay is rewarding, refreshing, and encourages experimentation, but it does not offer any handholding. In fact, Dungeon Defenders displays a four minute tutorial that doesn’t entirely explain itself, and makes the gameplay out to be more convoluted than it actually is. This game is not friendly to newcomers of the genre, but with some trial and error, it becomes much easier to get the hang of. This game would have benefitted from a more interactive tutorial than what is provided by the developers. Dungeon Defenders is a challenging game, but with its adjustable difficulty the game provides a plethora of content while being accommodating to those of varying skill levels. 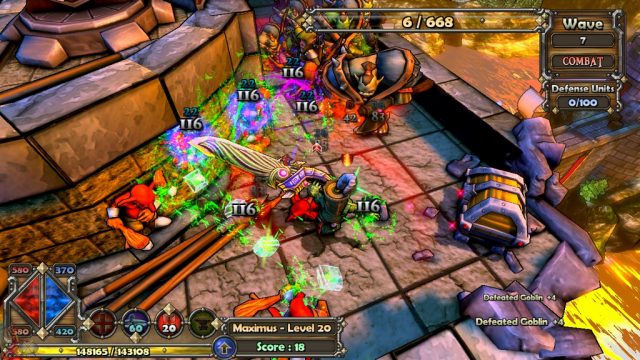 Try to defeat my rainbow sword of justice!

It’s also important to note that this game is very much a cooperative experience. While it’s possible to play the game entirely single player, it’s is quite tedious. With friends the enjoyment value skyrockets, as it’s fun to strategize, argue, and plot how the phases will move. While this game is crossplatform for PlayStation 3, PC, iOS, and Android, Xbox Live Arcade users are out of luck in being able to play the game outside the confines of a Microsoft console. This is truly disappointing as it would have been great to have that kind of connectivity.

Still, having a buddy makes the experience far more rewarding, though one small gripe comes in the form of loot. There is too much vendor trash in Dungeon Defenders as the ration of great items to garbage is fairly small. This wouldn’t be too much of an issue if item drops weren’t so frequent, cluttering up the maps with their uselessness.

Outside of the game’s great core experience, Dungeon Defenders sports amazing level design on top of crisp cartoony visuals. The game is stunning to look at and its vibrancy pops on the screen. The game is definitely designed with HD televisions in mind, so playing the game on an SD TV may be challenging as tiny text is abundant. The art direction and level design is excellent and Trendy Entertainment has created a game with visuals that truly enhance the play experience. The same cannot be said for the soundtrack though, as it’s adequate but forgettable. It’s far from bad, but doesn’t do enough to stand out. The voice acting from the narrator is well done, showcasing the typical gruff-old man voice, which does add a point in the sound’s favour. However, there’s not a ton of voicework to speak of.

Dungeon Defenders is unlike any game you’ll find on the market, and that is what makes it such a triumph. It’s not without its few pitfalls, but it creates an enjoyable atmosphere that has yet to be replicated by other co-operative RPG experiences. It’s frantic and silly with tons of charm. Most importantly, it’s just plain fun. While the gameplay may take a bit of getting used to, once invested the fun never stops. There’s nothing more satisfying then a game that encourages good old-fashioned teamwork, tons of elf and orc slaughtering, and victory dances performed without pants.