When Dragon’s Crown was initially reviewed, the format was rather different than usual. As I am a set recluse who does not interact with others in my games such a review style is beyond my capability. I must instead talk about Dragon’s Crown as a single-player experience, where it is nevertheless one of the better RPG and beat-em-up fusions to have come about. Whether it is superceded by the enhanced version coming in 2018 does not take anything away from Vanillaware’s original.

The player selects a class upon beginning, and this class heavily influences what can be accomplished. Multiple varieties of play style can be accommodated with more than one variety of magician, offensive brawlers, defensive warriors and archers all available. Each class plays differently, allowing multiple methods of progress. Dwarves are offensive brawlers overly endowed with muscles that are immensely useful for smashing opponents in the face until dead, while elves are archers and not the best at slugging it out in the closest possible quarters. Combat adheres to most of the standard rules for beat-em-ups, but impressive character variety always enlivens this type of game and Dragon’s Crown enthusiastically demonstrates that concept.

Characters cannot alter their fighting methods to something completely different, but the immense range of options available for development nevertheless lets the player influence what they can do. Class-specific actions can be introduced and enhanced as the player likes, with effects ranging from increased casting speed to dropping bombs all over the screen when jumping. Too many abilities are available for any character to acquire all of them with the limited points present from each level gained, compelling players to pay attention. It is possible to have multiple characters of the same class with noticeably different skill sets as they develop, making things even more interesting. 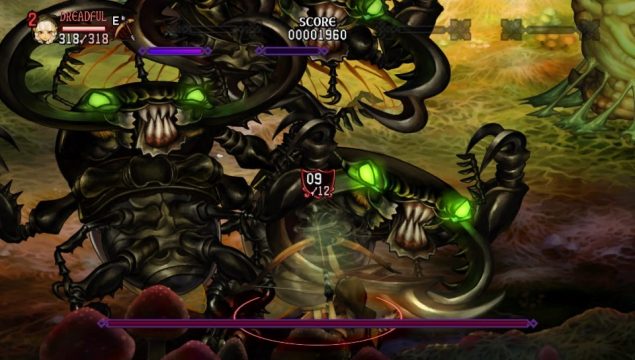 After all that work trying to improve beetles in the public eye, they’re demonized again.

Gaining levels allows character development through learning new skills, but it also allows new equipment to be used. Dragon’s Crown has an astonishingly large complement of equipment for this type of game, and every piece of it is strictly prohibited from becoming the attire of a character below the necessary level. This grandiose assortment of possible things to be worn also comes with multiple statistical effects, from elemental affiliation to multipliers of basic damage calculations, and requires quite a bit more item management than beat-em-ups typically demand. All of this material also comes with degradation amounts that must be taken into account and each piece needs to have a paid evaluation before it can be equipped, increasing the complexity of the gear proceedings. While fascinating in short stretches, there are times when all this starts to become tiresome.

At least Dragon’s Crown is quite meaty for a beat-em-up, sporting ten levels each with a branching path to allow lots of real estate. Hidden rooms are plentiful and a wide assortment of nasty opponents fighting with numerous methods ensures that the action never gets dull. Quite a few quests are present too, many of which require the player to do something a little different than normal in order to complete them. The game eventually doles out additional content via the means of increasing the difficulty and asking the player to go through the same levels again, but for a beat-em-up the package is a sizable experience, potentially requiring ten hours to complete, and more if one seeks to finish every mission.

The feature of having up to three friends online take characters back and forth between games is a nifty one, but even for those with troublesome internet connections Dragon’s Crown allows AI-controlled entities to drop into the story unless this is deliberately deactivated. The AI characters aren’t necessarily brilliant, and their conversational abilities are certainly lackluster compared to those of genuine human beings, but they’re a lot better than nothing. Extra participants allows the player to sidestep whatever limitations are intrinsic to a class along with making enemies divide their attentions, plus beat-em-ups always benefit from more onscreen carnage. 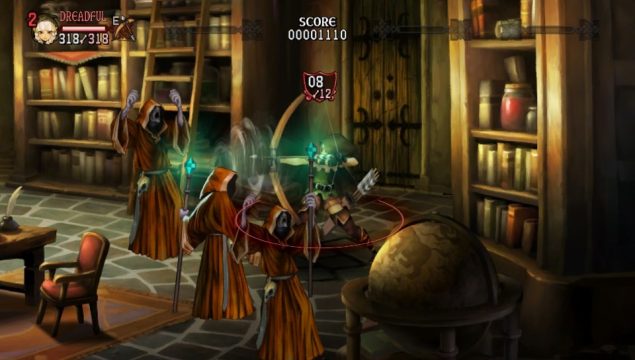 Can we all agree that the library is not a place for murderous magicians to freely operate?

Where Dragon’s Crown will not attract attention is in its narrative. The dulcet tones of its English narrator are quite impressive, but the events he describes are only made interesting because of the verve with which they are uttered. A tale of heroes overcoming mystical challenges and saving the world is bequeathed to the player with little in the way of interesting details to make it stand out from umpteen other stories of this sort. If adapted into a written work this particular tale would struggle to fill three pages, and much of that length would consist of proper nouns for locations and enemies being confronted.

Certain aesthetic choices Vanillaware made for Dragon’s Crown character artwork occasioned a lot of controversy, but no one can deny that the 2D sprites and environments are gorgeous to behold. Each screen has distinct effort put into its look, every enemy’s animations are fluid and fast, the multiple things characters can do are portrayed vividly and the incredible detail put into all aspects of the game is assuredly captured on the screen. Character designs are admittedly rather ridiculous, displaying body types that go too far for even some comic book art, but are nevertheless well-portrayed and distinctive. Aside from the sonorous narrator’s voice, most of the other audio does an excellent job of complementing the onscreen action without drawing a great deal of attention to itself.

It’s quite possible that I would have been even more taken with this game had plenty of friends been in the area so that we could cooperatively slaughter the forces of evil. Even as a solo experience though, Dragon’s Crown is a blast to play. Fiddling around with all of its inventory is sometimes bothersome but it never overshadows the entertaining thrill ride of smashing things to a bloody pulp. Whether it’s this original or the enhanced one coming in 2018, anyone with an affinity for beat-em-ups mixed with RPGs who hasn’t tried this should do so poste haste.