Regions outside Japan had to wait more than a decade to get Dragon Quest V and VI on the DS, but the seventh entry in the series made its way across the Pacific much more quickly. In the tradition of its predecessors, Dragon Quest VII has now been given a Nintendo handheld remake, but North Americans wanting to play it in English are still stuck with the original PS1 incarnation, the last in the series to be released before Enix could copyright Dragon Quest for naming purposes outside Japan. Players outside Japan were first given the chance to play Dragon Warrior VII on Halloween in 2001, a wholly appropriate date once the game’s many frightening mechanics started making themselves known.

DQVII takes place on a peaceful island with little of consequence occurring, just fishing trips and idle banter. The unnamed hero and his two friends get involved with an exploration of the ancient ruins on the island, and after much poking around the group is whisked onto a different island in the past. This place’s sole inhabited zone is full of males wrecking their surroundings in the hope of getting back their womenfolk from a nasty monster, and solving this issue puts the party back into the present with the island from the past newly appeared on the horizon. Journeying back to the past to solve the problems of many other people will eventually cause the world’s known land mass to fill out the map.

The many small stories told by visiting the various lands display varied levels of writing aptitude, but one thing all of them have in common is a critical contradiction with regard to the passage of time. The people of the new lands say they’ve been there consistently, yet the inhabitants of already-existing areas talk as if these places suddenly popped up where nothing had been prior. While writing a story in which the protagonists are the only ones who recognize the changes to the world around them is a difficult prospect using Dragon Quest methods, it still fails to make sense.

The overarching plot that eventually arises has potential on its own, involving a Demon Lord that battled God over the fate of the world. Why most of the world’s land mass was sealed in the past is unfortunately never divulged, and the conclusion is remarkably limp after all that led up to it. VII also introduces the idea of party chat, something that would be expanded upon in the remakes of earlier games for the DS. Expanding upon it was easy, since the characters here often have nothing to say even when their circumstances would seem to produce exclamations of some kind, and when they do have things to say the results are rarely interesting. 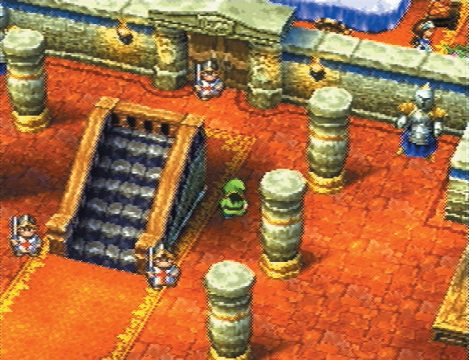 That Crusader-style armor is popular with every soldier in the game, despite the confusion it must cause in a fight.

Combat in the seventh Dragon Quest is remarkably like that in its six predecessors, save that this one takes certain annoying aspects of the series and amplifies them. Random turn-based brawls are the norm, with the usual series mechanic of having enemies grouped into a number of bands, the individual members of which the player cannot target. Like many turn-based systems the order in which participants take actions is often impossible to predict, with such spectacles as the character who acted last in the previous turn acting first for the subsequent one. While the protagonist must be manually controlled, in some situations setting the other characters to AI control is a smart move due to the computer’s clairvoyance when it comes to administering the right move at the right time.

VII brings back the class system found in Dragon Quest VI, but makes it even more aggravating to use. The game requires a certain number of battles to be fought while in a class to improve it, and that number is not small. The simplest of jobs requires 130 battles to master, and full knowledge of at least two basic classes is mandatory to start unlocking the more advanced vocations. Setting a job aside is also not recommended, as the game forces makeup battles onto players who go back to it after a break. Just like DQVI, there is only one place in the world where jobs can be changed, and it is only at Dharma temple where an NPC can tell how many more fights are needed to advance a level in any current line of employment. The game also does not tell players whether the enemies currently being engaged are at too low a level to net any job reward, which along with the number of fights necessary to progress will result in a lot of wasted time. Consultation of a FAQ is strongly recommended to minimize the time spent wasted in fruitless occupations and encounters, but will not prevent an inordinate expenditure of hours on the player’s part. The encounter rate is not exorbitant enough to guarantee characters steady class growth unless the player makes a point of seeking out as many fights as possible, preferably by staying in one location until the cast has hit that area’s job level cap.

In addition to its class system’s mysteries, this title insists that the player spend a great deal of time on fetch quests and NPC consultations. Unlocking new areas is accomplished by finding various shards, which then clog the party’s inventory until they can be deposited into the proper location. Without these shards progress is impossible, and many of them demand exhaustive examination of both past and present locations. Missing just one shard necessitates a lengthy trip to discover where the missing piece is, and drags out an already-lengthy title to greater lengths. The backtracking includes treks through the same terrain repeatedly, especially to and from the ruins at the game’s beginning. Coupled with the time necessary to get rewards from the job system, getting through the game without FAQ help will easily surpass eighty hours. At least twenty of those hours will be expended before the class system can be accessed, proper use of which is necessary to have reasonable hope of progress afterward. None of that time is ever at risk of being lost thanks to the series mainstay of simply losing half the current gold if a fight is lost, but plenty of points of no return exist to punish those who try to carelessly march forward underpowered.

By having a bag into which excess items can be placed, DQVII‘s inventory is better than the earliest games in the series. Managing the constant stream of things found in the game is nevertheless an enormously time-consuming process, because things that are useless in combat and thus have no place in the inventory of individual characters keep getting assigned there, which necessitates more menu navigation to clear out the clogs. Shopkeepers are too timid to presume that the player might want to get rid of now-outmoded equipment after purchasing something new, and everything must be bought or sold individually. In tandem with these issues, the shopping menu lacks space to describe special effects of purchases, but these things are visible after the money has already been spent. 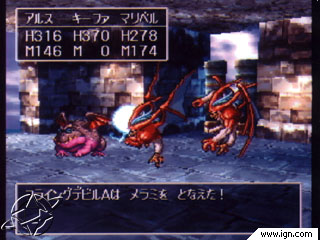 To get this good with the starting trio in the game would have required more hours than some people have devoted to WoW.

Upon its North American release in 2001, many reviewers found it necessary to talk at length about this title’s graphics. They certainly don’t display much of the PlayStation’s power, and with few exceptions could have been done on the SNES. Nowadays they are more notable as the template from which the trio of DS Dragon Quest remakes grabbed their graphics, except in a more primitive form. Far too many important NPCs have exactly the same sprite as many other unremarkably townspeople, and the pixelation when objects get too close to the camera is unpleasant to the eye. These visuals still deserve credit for not being as immediately repellent as some of the 3D at the time, except for the rare FMV sequences which are abhorrent.

Koichi Sugiyama’s score for this game is certainly solid and effective — at least it would be if more tracks were present. The lack of variety for town themes in particular gets annoying later in the game, while dungeons also feature too few compositions spread over a lot of game time. The sound effects are barely improved in quality over those of Dragon Quest games on the NES, which starts to get bothersome long before the game is finally over.

Millions of people bought this game upon its release in Japan, but the number of people who actually finished it is unlikely to equal that total. Even the speediest of gamers will need several days’ worth of time to complete this, much of it spent blundering around in fetch quests or enduring more NPCs yammering about their problems in typo-riddled text. Playing VII is a good way to appreciate the effort that went into making later games in the series, but on its own merits is not likely to produce many positive emotions except happiness when the controller is set down.