An Even Nerdier Smash Bros.

There are two things that every Final Fantasy fan has in common: there’s a character they love and a character they hate. With the countless forum debates between raging fanboys advocating for their personal favorite’s supremacy, one has to appreciate the brilliance of Square Enix for creating Dissidia: Final Fantasy, a fighting game/RPG hybrid that brings all the heroes and villains of the twenty-two-year-old series together. Finally these fans can take their arguments to the battlefield.

Of course, bringing twenty characters from ten distinctly different universes together into a single story is no easy feat, and unfortunately it shows. The game has heroes and villains from alternate realities being brought into a new one to fight a war between two gods, Cosmos and Chaos. The game’s Story Mode makes up the biggest portion of the game, and is divided into two sections: Destiny Odyssey and Shade Impulse. Destiny Odyssey is a series of ten different prequel-style stories in which each of the ten main heroes search for a crystal needed to help fight against Chaos. These take up the largest portion of time and serve mostly as an introduction to the character’s fighting style. The Destiny Odyssey stories are all intermingled and often overlap each other, creating a fairly interesting nonlinear narrative that slowly explains what these characters are doing here and what exactly is going on in this strange world.

Once a single Destiny Odyssey has been completed, you can immediately move on to Shade Impulse, but it’s better to finish the Destiny Odyssey’s first. Shade Impulse is made up of five chapters and is the real story of the game, which sees the warriors of Cosmos, crystals in hand, finally rise up to defeat Chaos once and for all. Unfortunately, this section of the story is rather bland, unfocused, and short. The story segments are much sparser than in Destiny Odyssey while the actual battle maps are much longer. Similarly, the only input any of the characters have in the larger story is just to reiterate what they learned by getting their crystals in Destiny Odyssey. It also seems that the most interesting story segments can only be uncovered by playing through the Shade Impulse with every character, as fighting a battle against your character’s nemesis will unlock a final story scene with them, while defeating them with any other character will not. The overarching story of Cosmos versus Chaos feels more like a bad episode of the Twilight Zone.

Luckily, the story serves little purpose other than to give you an excuse to battle, and the combat is terrific. Dissidia has been touted as a fighting game, but the reality is that it’s more of an action RPG in which all battles are one on one. There are no complex button combinations to remember, and level and equipment are as important to victory as player skill. As characters level up, new techniques and passive skills will be learned which have to be equipped, and new weapons, armor, and accessories can be found in treasure chests and purchased from the shop. Customizing your character of choice to fit your playstyle is one of the most enjoyable aspects of the game. There’s even a wide assortment of summons! 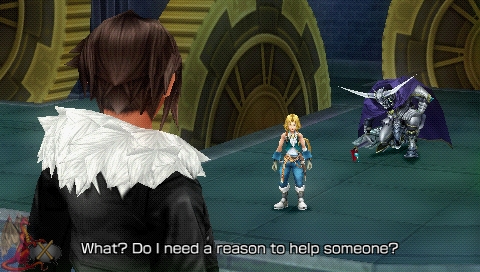 C’mon Squall. Help me help you.

Combat takes place on one of several enormous maps, and the battles can be spectacular. Structures can be destroyed, characters fly through the air and strike each other with flashy combos, and every fight feels like an interactive version of Final Fantasy VII: Advent Children. The mechanics of combat can seem complex at first, mostly due to the painfully bad tutorials that make things seem far more complicated than they actually are. Each character has two stats to keep track of, their HP and their bravery. Likewise, each character has two types of attacks, HP attacks and bravery attacks. Combatants use bravery attacks to steal each other’s bravery, while HP attacks will use that cumulated bravery to strike their foes hit points, reducing their own bravery to zero in the process. When a character runs out of HP, the battle is over.

These basic mechanics are all you really need to know to play the game, with the more complicated aspects such as dodging, guarding, dashing, and EX Mode being learned as you go. After a few hours, the nuances of the game become second nature and the game becomes that much more enjoyable. And because it’s an RPG, players who aren’t good at the game can simply grind some levels until they can win a particularly difficult fight, making it much more accessible than a typical fighting game.

Apart from Story Mode, the game also features an Arcade Mode, which strips the RPG elements of the game away and turns it into a pure fighting game. Completing the Story Mode also unlocks the Duel Colosseum, which is another game mode designed to provide access to high level equipment. Story Mode and the Duel Colosseum both have interesting strategic elements to them that make them the most enjoyable ways to play, but going over their complexities would simply take too much space, so I will instead refer you to our Dissidia feature for more details. Players can also fight in customizable quick battles or fight against friends through an ad-hoc wireless mode. Sadly, the multiplayer isn’t online, which is easily the game’s biggest detriment.

Well, that and the load times. Dissidia is riddled with them, and it can make many of the simplest tasks an exercise in patience. Loading a battle takes roughly five to ten seconds, and even just opening and closing the menu takes a few seconds. Luckily, Dissidia provides an option to install the game on a memory stick, which can reduce the loading times to a much more manageable level. The installation process is lengthy, however, and the game warns that it could take as long as an hour to perform. 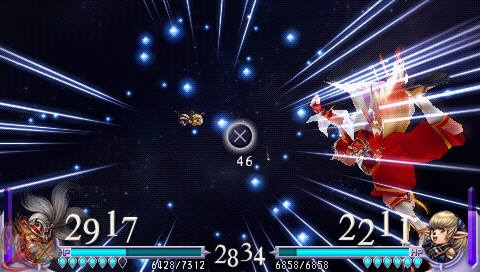 Someone told him to pick on someone his own size.

Like Square Enix’s other 3D PSP endeavor, Crisis Core: Final Fantasy VII, Dissidia really pushes the PSP’s visual capabilities. The character models are well designed, terrifically animated, and quite detailed. It’s also nice to see Yoshitaka Amano’s original character art for older Final Fantasy titles so faithfully rendered into 3D. It’s particularly noticeable with the Warrior of Light, Bartz, and Terra. The environments are quite impressive, but the limited number in the game can make story mode fairly dry once you’ve seen them a dozen times each.

The audio is much more varied, however. There are at least two battle themes from every Final Fantasy game included in the game, along with several original tracks and an additional track from each game, such as the town theme from the original Final Fantasy or the music from the opening of Final Fantasy VII. Some of these tracks are originals while others have been rearranged by Takeharu Ishimoto, and of particular note is the massive arrangement of sequenced Final Fantasy theme songs that plays during the end credits. The voicework is also quite solid, if somewhat typical for a JRPG. Weird breaks in the dialogue occasionally interrupt the flow of cutscenes, but it’s easy to ignore.

Dissidia‘s greatest strength easily lies in its longevity. While story mode can be completed in as little as ten hours, the game can easily absorb you for hundreds thanks to the twenty-two unique playable characters, three game modes, post-game story chapters, and multiplayer component. The game is also as easy or as hard as you want to make it: much of the post-game content is incredibly difficult, while some has a much milder challenge level. Even at max level, it’s possible to create CPU opponents who surpass that, and possibly even double it, for those who want a truly brutal challenge. Dissidia is a great game, and it should have no trouble satisfying action-RPG fans, fighter fans, and of course, fans of Final Fantasy.