That’s the Power of Sardines!

Disgaea 4: A Promise Unforgotten marks the latest in the strategy RPG series from Nippon Ichi. The biggest addition promised for this entry was a big uptick in the graphical presentation after Disgaea 3, which largely looked like a PlayStation 2 title instead of the PlayStation 3 game it was. Though the graphics are certainly a vast improvement over the previous entry, the highlights of Disgaea 4 end up being the refined gameplay and entertaining story. In fact, with graphical elements outside of the beautiful new character sprites often being uneven, this continues to be the weak link for the series, though other areas more than make up for that.

Disgaea 4 tells the tale of a former demon tyrant, Valvatorez, and his faithful werewolf servant Fenrich. Valvatorez, having made a promise in his past not to drink human blood again, has lost all his former powers and is forced to be a lowly prinny instructor. Adding further insult, he must rely solely on sardines as a power source. After a plan to exterminate all prinnies is enacted by the netherworld’s government, the corrupternment, Valvatorez sets off on a quest to topple the current president and restore demons to their proper role of instilling fear in humans to keep them in line. If this sounds like a silly setup for a story, it’s because it is. Disgaea 4 keeps up the humor that the series is known for, complete with the over the top story and setting. All kinds of hilarious shenanigans happen throughout Valvatorez’s quest, including the occasional bit of fourth-wall breaking.  The game’s party members are all equally as silly, with a final boss in training and a money-grubbing angel being among their number. Despite the light-hearted tone of the narrative, it touches on some serious matters and looks at the overall place of demons and angels in the Disgaea universe in a way that has yet to be done in the series. The quality of the story and characters here is simply top notch.

Going back to the visuals, Strategy RPGs have rarely been known for providing the highest quality visuals available. Still, the previous entry in the series left a lot to be desired on this front, and there is no doubt that the series has now entered the HD generation. Everything in the 2D realm, from character sprites to the moving character portraits that are often shown during character conversations, looks fantastic. However, because these elements look so good, poorer visuals stand out by comparison. 3D effects such as terrain and some character attacks often look blocky, and not quite up to par compared to the wonderful character sprites. That’s not to say these things are bad; they just tend to feel dated in comparison. Still, the overall presentation is beautiful thanks to the incredible quality of the abundant 2D artwork. 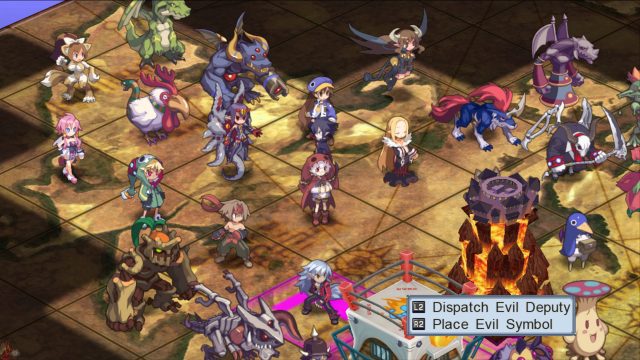 The new character sprites are as beautiful as fresh sardines.

Music and sound, on the other hand, are spot on. The music in Disgaea 4 provides a nice backdrop for whatever the current situation may be. The battle themes match the severity of particular fights, light hearted music matches the more humorous moments of the game, and of course somber music matches the infrequent, but present, serious moments. Some of the themes contain vocal work, though regardless of the language option selected they are always in Japanese. The sounds, for everything from spells to attacks to battle cries, all provide the necessary weight to players’ actions. The Disgaea series has always featured excellent voice work, and the latest entry does not disappoint. The voice actor for Valvatorez is the best of the group, providing a hilarious amount of bravado, especially when imparting ever important facts about sardines. Though some of the voice actors don’t shine quite as well as the rest, none could be called bad. The voice actors have great chemistry, so it blends wonderfully. The option to use the original Japanese voices is also available, for those who prefer it.

The battle system is the heart and soul of Disgaea 4. The game uses a simple setup much like other tactical RPGs, especially the prior games in the series. The biggest feature the series adds to this formula is the use of geo blocks and geo panels. These allow for a greater variety of battle stages where players have to deal with various status effects on the terrain as well as enemies themselves. In addition, the series includes features such as combo attacks, lifting and throwing ally and enemy units, and the ability to change monster class characters into weapons during battles to power up a character. These features are all completely integrated into the experience. The battles are designed in such a way that players will need to use all of these features to succeed, as the enemies will be just as quick to use them to their advantage. Thus, there is a greater deal of strategy required, keeping the experience deep and challenging. 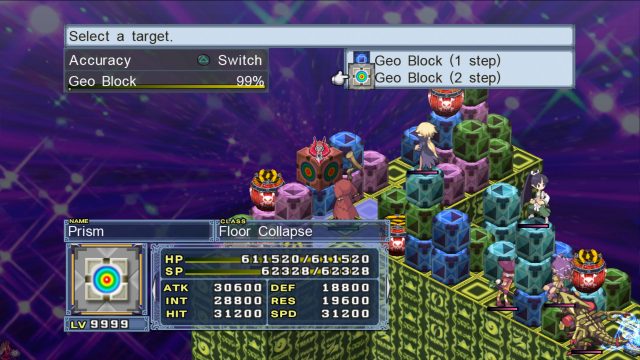 Geo blocks are a constant challenge, and many maps are full of them.

Disgaea 4 doesn’t drastically deviate from the established formula of the series, but instead refines older systems. New to this entry is the ability to fuse two monster type characters together into a larger and more powerful monster for the duration of a battle. Players can also carry two monster weapons and change a fused monster into a weapon. Sadly, these abilities are relegated to the post game, though late game enemies will use them. Strangely, a system from Disgaea 3 that allowed characters to combo together skills in a similar way that characters can combo regular attacks is missing from this game, at least in the initial playthrough. Disgaea 4 may not have much in the way of new features in the combat system, but it more than makes up for this with challenging map design. When the geo panels/blocks aren’t present, this is often made up for simply by increasing the enemy count, or making the terrain more challenging to navigate. There are almost no maps where players can simply charge forward with the most powerful characters and expect to succeed. The level designs are a vast improvent over those from earlier games in the series, which could often be bland. Disgaea 4 is always finding new ways to challenge players, keeping things interesting from the start of the game, to the end, and beyond.

The game provides a number of optional features to help overcome these many different challenges. Players are given enough story and other characters to round out the party, but are also free to create their own characters if they so choose. Classes range from the usual fighters and mages, to various monster types such as zombies. In Disgaea 4, one can place characters on a campaign map screen, with each square on the map representing an area of the netherworld they’ve conquered by completing a story battle. Characters closer to each other will be more likely to combo their attacks in battle. On this map players can also place various symbols, which provide beneficial effects to the characters within them. Many of these effects are quite powerful,  though the most powerful symbols must also be gained via the senate. There are just many different ways to create and organize the party, giving players a tremendous sense of freedom. New characters start at level one, so a bit of grinding is required to get them up to strength with the rest of the party. Disgaea 4 provides seemingly limitless ways to go about such grinding, including random dungeons accessible inside each item, replaying previous maps, and, new to this entry, designing and completing custom maps in the map editor. The map editor also allows players to create maps with their own high level characters as enemies. Creative players can find ways to turn such maps into easy grinding zones for their low level characters.

In the end, Disgaea 4 is simply the finest expression of everything that the Disgaea series is. It has a fun story with memorable characters, an excellent battle system, and hundreds of hours of optional content. It is well balanced for the most part despite a difficulty spike in the final chapter of the game. For those less inclined to a challenge, the many grinding options provide an easy way to overcome these battles. The battle system, through the geo block and geo panel systems, provides constantly evolving battles that keep things fresh and interesting through the main story, never reducing the game to simple brute force strategies. With numerous post game challenges, the random dungeon system of the item world, and a new game plus option, it gives new meaning to the phrase “bang for your buck.” It may be difficult for those new to the series to figure out, despite tutorials that go over all of the basic features. However, those who stick with the game to the end will find an an extremely entertaining and challenging strategy RPG on par with Final Fantasy Tactics and Tactics Ogre, if the players just dig deep enough.