This Gazer May Need Glasses

Demon Gaze is an anime-infused first-person dungeon crawler from Kadokawa Games and an experienced developer in this sub genre, Experience Inc. Experience’s expertise in the genre shows quickly, as super fast battles and easily grasped mechanics make the game easy to get into. Publisher NIS America’s fine localization helps as well, with several fun and well voiced characters to entertain when not exploring dungeons. Unfortunately, a lot of little issues mar what is otherwise enjoyable dungeon crawling. These problems range from uneven difficulty and annoying bosses to needless, gross fanservice in what is otherwise a fun and interesting story. This is a shame, because so much about the rest of the game provides a refreshing take on the Wizardry style of first-person dungeon crawlers.

The story begins with the player-created demon gazer, a person with the rare ability to capture demons, setting up shop at an inn full of monster-battling-mercenaries. Taking over for the previous, now-injured demon gazer, the player is tasked with tracking down and capturing ten demons with the help of the various colorful personalities employed at the inn. The story at the start mostly provides a goofy distraction from dungeon crawling, and provides a nice break, especially after a particularly difficult boss. Some seriousness does make its way into the narrative as the true purpose of the demons and the secrets of the inn’s various residents come to light. The story is far from a masterpiece, but provides enough funny and serious moments to keep players intrigued and entertained. Some questionable fanservice moments do pop up at times, which could be best summed up as “weird underpants shenanigans.” Thankfully, these moments are few and far between.

Players start off selecting the look of their main character from a list of portraits, but can’t set the class, which as the premise suggests is locked to the gazer class. Despite some basic similarities between Demon Gaze and other Wizardry-like dungeon crawlers, the game quickly sets itself apart from the pack by streamlining much of the experience. For starters, players don’t begin by building a party, instead having to earn enough gold to rent another room to add another party member, to a maximum of a party of five. The game even offers a pre-made character, for those who may not want to bother with class selection for each new member. Though this limits party construction a good deal, it does help get the game moving much quicker as it spreads out party construction over the course of the game instead of cramming it into the start. 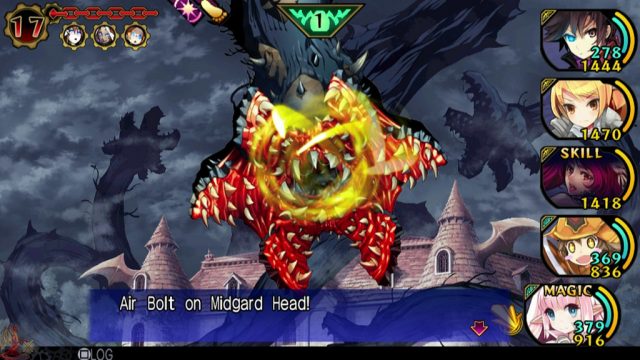 I hope you don’t kiss your mother with that mouth.

As for character creation itself, there are a small number of races and classes to choose from. This includes your typical fantasy fare including elves and dwarves, and healers and wizards. There’s no real customization to be had beyond these initial selections, except for some freedom in selecting stats to increase on level ups. There are equipable artifacts that allow the usage of skills from other classes for a bit more customization, but these prove to have a somewhat limited use. Abilities are often very tailored to the skillset of a given class, so wizard skills won’t provide much utility for a paladin for example.

To round out the party, the main character has the ability to summon demons in battle. This shouldn’t be confused with anything like the Shin Megami Tensei series, as there are only ten demons to be gathered in the game. The summoned demon will use skills on its own each turn. A gauge, which fills up by defeating enemies, slowly ticks down each turn a demon is out. If this gauge reaches zero, the demon will enter rage mode and attack friend and foe alike. Points from this gauge can also be used for special skills from the currently equipped stock of demons, and they provide exploration abilities as well, such as preventing damage from trap floors. It’s just a shame there aren’t more of them. Since these demons correspond to boss fights in the game, the last few aren’t even available until near the end of the game.

Once in dungeons, Demon Gaze‘s best features get a chance to shine. The combat in the game is lightning fast. After selecting attacks and skills, holding down the X button will zoom through a round in a matter of seconds with animations flying by. It can get so fast that players may have to pull up the combat log to see what just happened. It keeps things moving, which is good, as the game’s dungeons can get quite sizeable. Skills for each of the classes provide a lot of options and utility in battle, and even wizards and clerics have plenty of support abilities beyond elemental damage and healing.

Each of the dungeons generally has the same objective: to capture a number of maps points to eventually unlock a demon boss fight. Capturing these points involves fighting a random set of difficult enemies, but they reward the player with new equipment in addition to advancing towards the next boss. Since these can be recaptured on each visit to a dungeon, they provide a great way to grind for gear and experience. With a clear goal of finding these points in almost every dungeon, the game feels like there’s always forward momentum, and less aimless wandering. 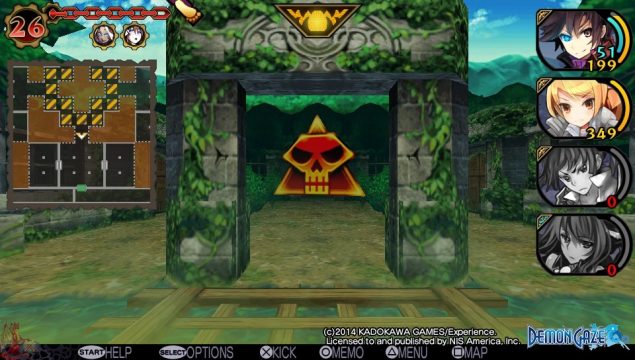 Maybe best not to try and tackle this monster with two party members down.

The dungeons themselves are quite varied, using plenty of tricks like trap floors, conveyer belts, one-way doors, hidden doors, and even underwater areas where magic can’t be used. The look of the dungeons stays interesting as well, as each new location brings a completely new look and feel along with it. Though combat primarily occurs through random encounters as the player explores, there are also a number of stationary monsters that the player can walk into to initiate a battle. These typically block paths forward, and contain random sets of enemies so they can sometimes be very challenging. Oddly, players are free to attempt to run away from these battles and then go right back in and get a different set of random enemies in case things go poorly. Another notable feature of dungeons is the ability for players to leave helpful notes for each other, Dark Souls style. Though many of these are unfortunately bad attempts at jokes, there are plenty that prove to be extremely helpful.

Though parts of the early game can be tough, especially the bosses, everything is generally well balanced and things move quickly and smoothly. Unfortunately, Demon Gaze seems to lose its way a bit as it progresses, right as the story picks up. Major bosses for the most part become huge difficulty spikes, often using annoying tactics that require luck to get past instead of sound strategy. The difficulty can be changed at any time at the inn, but even on the easiest difficulty these boss battles don’t prove to be any less infuriating. It’s a shame, as the enemies in the dungeons leading up to these battles are generally well balanced, and exploring remains fun for the duration of the game. Obviously, frequent roadblocks put a damper on this. Worst of all is the final boss, which is a lesson in absolute frustration.

At least the visuals and music provide some relief from these annoyances. As previously mentioned, the dungeon styles are varied and stay fresh for the duration of the game, providing something new just as the tileset of one dungeon becomes stale. Monsters and player characters are all static sprites but come in all sorts of shapes and sizes, avoiding generic fantasy tropes for the most part. Though some of these enemy sprites are reused, it’s not frequent enough that it becomes bothersome. The music is a bit of a mix of more classical themes and rock themes, with frequent female vocals mixed in. While not always stellar, the music does a great job at setting the tone and making boss encounters feel epic. The only real complaint in the audio/visual department is the small number of animations for attacks and spells. The game could have used a greater variety to spice up battles a bit.

All in all, Demon Gaze is a decent experience. It streamlines Wizardry-likes and provides a much more palatable experience. Battles are quick, dungeons are interesting, and party building is good, if lacking a bit in customization options. If not for the severe balancing issues, Demon Gaze would have been a breezy and fun dungeon crawler. The story, despite some gross fanservice, is enjoyable and would have been better off without multiple road blocks requiring a good amount of grinding. Still, it’s not a totally wasted experience. With a sequel on the way, it appears Demon Gaze will become a series, so hopefully future entries will fix the issues with this one.