Like many sequels preceding it, Dark Souls II has the unenviable task of following up a beloved title. Expectations are set sky-high. Sky-high expectations among the fans were tempered by worries at From Software’s change of director. These worries turn out to have been for naught, as Dark Souls II is a brilliantly designed game that takes ideas from both of its predecessors to create a simultaneously familiar and fresh experience. There is an astounding amount of content to explore, from a new magic type to all manner of weapons and armor. Dark Souls II is every bit the replay-rewarding obsession that its predecessors were, and dwarfs them by leaps and bounds in sheer amount of content.

The story in Dark Souls II doesn’t have much direct connection to the original game, though many references to that game make clear the two take place in the same world. Again cast as a cursed undead, the player’s character is mysteriously drawn to the land of Drangleic. There this chosen undead must search for the king and hunt down multiple great souls for some unknown purpose. This series is known for nebulous tales that do not spell out everything to the player, weaving narratives that set a mood and enliven the game world instead of telling a more traditional type of tale. This trend is upheld, though the story is somewhat more at the forefront here than in the first Dark Souls. There are many more NPCs to interact with, all of whom have a ton to say. Item descriptions and simple observations of the world around the player will also reveal plenty of lore. The series has always focused on player discovery and this type of story fits it like a glove. There are some areas that could use more detail and explanation, but on the whole Dark Souls II‘s story successfully creates a world players will want to explore.

Appropriately for a title in which gameplay is the focus, Dark Souls II‘s spectacular action RPG combat is the centerpiece, augmented by a plethora of enjoyable content to discover and explore. Combat revolves around a stamina meter that is used by all actions such as blocking, attacks, and casting spells. Button mashing will deplete this stamina quickly and leave the player defenseless, creating a measured pace for encounters. Most enemies from the very start hit hard as well, so defense cannot be ignored. The animation for each type of attack is of a different length, forcing the player to fully understand whichever armament is currently being used.  A further variety of options stems from the ability to dual-wield or use both hands for many weapon types, increasing the variety to a point where trying everything in a single playthrough is not practical. The series’ great combat mechanics are upheld with smooth controls and a logical presentation of all the aspects. Players can dodge an enemy and move behind it to counter, roll between the legs of giants, employ heavy weapons for breaking down defenses in a system designed around finesse. 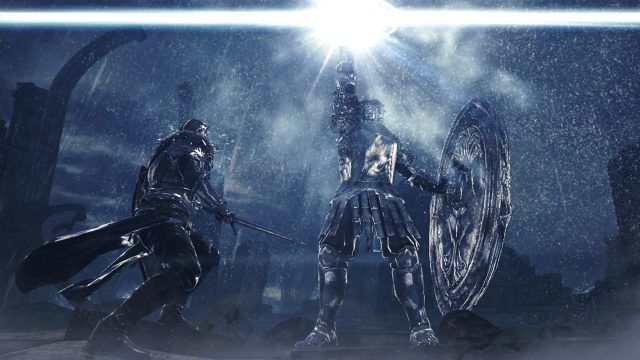 Boss battles are as intense as ever.

Players will nevertheless be defeated numerous times, and Dark Souls II attempts to merge the style of its predecessors when dealing with this aspect. Each consecutive death lowers the player’s maximum health down to at most fifty percent, which was the penalty for a single death in Demon’s Souls. This adds a bit more tension to death in the game, but after the early going many ways to mitigate the effect are uncovered to make things more manageable. Like past games in the series, death means dropping all accumulated souls, the game’s currency for purchasing items and stat upgrades, unless the player can get back to them without dying again. Loss of souls is the real concern when facing death in this game, which makes its addition of health loss feel odd, though thankfully it does not have a negative effect since the health loss can be undone with remedies.

Demon’s Souls‘ linear levels with multiple parts and Dark Souls‘ Metroidvania style are blended for this world’s design. Though the locations in each path don’t always connect in the most logical manner, this minor issue is easily forgiven due to the wonder of exploring the myriad locations. From a castle sinking into lava to an eerie gulch filled with the stuff of nightmares, there’s always an exciting new locale to drive the player forward. The staggering selection makes the original’s world look paltry by comparison. An idea taken from Demon’s Souls allows warping between the bonfires in the game, which makes switching between paths and exploring thoroughly much less time-consuming. Even more so than in its predecessor, Dark Souls II sports an awe-inspiring number of side objectives to create a massive game in which things never get dull.

Filling the wondrous vistas of Dark Souls II are a variety of beasts that seem to have received a massive upgrade in the AI department from the previous game. Enemies are smarter in their patrols of areas, and seem to work in groups better.  Group behavior matters because not only regular adversaries but also bosses can help each other out, making things quite dangerous for the player. The early parts of the game certainly don’t hold anything back either. To help those who are looking to mitigate the challenge, the ability to summon allies while in human form is available. A much improved server this time around means summon signs from actual players are easier to find, and the developers have added in more AI companions to summon as well. Also new to this game to provide the difficulty-averse some relief is the new respawn limit for enemies in each area. These features don’t make the game a cake walk by any stretch, they simply prevent the frustration that the previous games were known to inflict on some players. 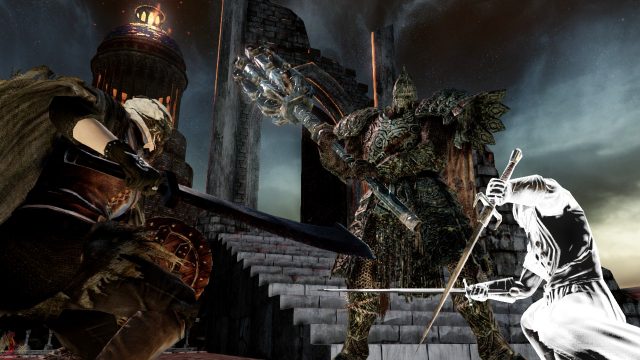 Veteran players with no need of assistance will find a wealth of challenges seemingly aimed straight at them. For example, lower starting stats for classes make the early game a completely different experience. Some classes don’t even begin with the necessities to wield even the most basic of shields. The additional new magic type and dual-wielding stance provide new skills for players to master. PVP-specific areas provide new multiplayer battlegrounds. Even the series’ well known new game plus mode, which increases difficulty with each playthrough, now adds additional challenges like new enemies to spice things up. This may sound like a simple change, but considering all enemies hit harder, it can drastically change the approach required to each area. An element of this mode can be brought into any playthrough as well. New bonfire ascetics allow players to respawn enemies and bosses in an area with increased difficulty if they so desire, providing players with further optional challenges.

On a technical level, Dark Souls II looks noticeably better than the previous game, with a frame rate that stays consistent throughout. The game uses this improved engine to bring the player through a range of areas with great diversity. A deep dark gulch glows with spots of strange green slime. A castle sinking into a lava lake is appropriately lit from the fiery liquid. The game’s central hub town sits by a vast sea, with another area the player will visit visible in the far distance. Each of these areas and the many others in the game help tell the story of the world through their distinct visuals. Players will be hard pressed to find a better looking RPG on PS3/Xbox360.

The sound effects stand out in the game’s audio design, effectively conveying everything from monster roars to subtle laughs in the background of an area with increased curse potency. The game doesn’t use music constantly, but when there is music Motoi Sakuraba’s soundtrack provides memorable and often haunting tunes. Occasional graphical elements that are not top-notch do exist, but Dark Souls II is overwhelmingly a wonderland of sight and sound.

Is Dark Souls II more than just a safe sequel? After all, it does use most of the same controls and mechanics as the original game. What separates it is how the enemies and environments force players to use these mechanics in different ways, and how those new mechanics allow players to take actions not even possible in the original. For example, playing as a magic user in the original often required mastering some other weapon type, as spell uses needed to be conserved for boss fights. In Dark Souls II, the availability of magic restoring items, more frequent bonfires, and an improved ability to assist other players in combat (which restores spell uses) mean players need to be far less conservative with magic and can play through the game using it almost exclusively. Of course that doesn’t mean things will be easy for players, as the game provides a variety of enemies with specific resistances and vulnerabilities, so players with singular focus will have to change their strategies. Thanks to an improved system for adding elemental properties to weapons, a new magic type, and an additional two equipment slots for each of the character’s hands, there are more strategies than ever available to players.

At the end of the day, Dark Souls II uses more subtle changes to find its own flavor and place in the series as a whole, rather than reinventing the wheel. The original game only had a few flaws which the sequel finds ways to iron out. Dark Souls II even manages the difficult feet of providing both challenge for those who want it, and help to make things easier for those that don’t. Combined with a wealth of content explore, dozens of character builds to try, and new equipment upgrade options to experiment with, players can easily spend hundreds of hours in the game and not see everything. Dark Souls II not only manages to be the pinnacle of the Souls series thus far, it is also the finest action RPG currently on the market. Both new and old players to the series would be wise not to skip it.