Not So Fine and Dandy

There are two things that become crystal clear within seconds of starting up Onion Games’ Dandy Dungeon: Legend of Brave Yamada. The first is its quirky, oddball Japanese storytelling sensibility, which takes content that seems at odds with itself — and even morally questionable at times — but manages through dogged insistence to somehow make it seem cute and innocuous. The second is the game’s undeniable mobile origins, hitting the player with a two-punch combination of low-res graphics and overly simple dungeon-crawling. The whole package gels together to make a game that stands out, though not always for the right reasons.

Yamada is a stereotypical video game programmer: in his late thirties, overworked, living by himself in a tiny apartment. He does, however, have two secret desires that fuel his desire for success: one is the game he has secretly begun programming at home on his own time, and the other is his sixteen-year-old neighbor, Maria, whom he is in love with, despite the age difference (and, for us westerners, the obvious moral implications). During the game’s first few minutes, Yamada is summarily fired from his paying job due to missing work to stay home and work on his dungeon-crawler. He then deduces that completing his game, and leveling its hero to make him stronger, will somehow win the heart of the fair maiden across the hallway. 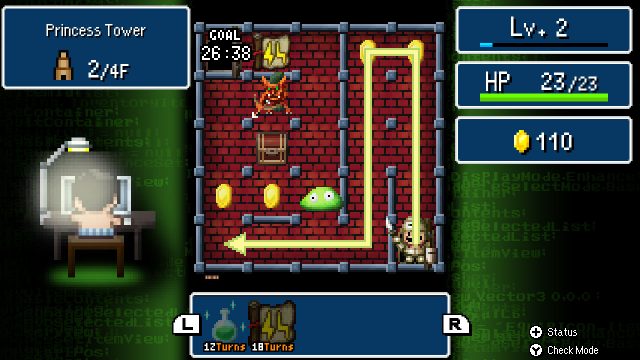 The dungeon crawling at the heart of Dandy Dungeon more closely resembles a puzzle-centric grind; as Yamada creates new dungeons in his game, it is the player’s job to clear, or “debug”, them using Yamada-kun’s in-game avatar, Brave Yamada. Each floor of a dungeon essentially consists of a five-by-five tiled grid, with individual spaces featuring monsters, treasure chests, traps, and items. At the start of a level, the player has to draw a path through the grid, making sure to cross each space they want to interact with, without doubling back or crossing over a previous path. Walls and other barriers make this harder as the game progresses, though it doesn’t take long to get a good feel for this system and quite a few floor layouts are reused or simply rotated. When an enemy monster is encountered along the way, Brave Yamada and the enemy take turns attacking each other until one or the other falls. Once a path through the current dungeon floor has been drawn, the player, essentially a spectator now, only intervenes to use an equipped item like a healing potion or spell. Bonuses are awarded for clearing each space on a floor, while uncleared spaces actually penalize the player by dealing some damage once the player has reached the floor’s exit. While it’s entirely possible to skip past many of the enemies, gaining experience through combat is vital to best end-dungeon bosses, as each and every run resets Brave Yamada back to level one.

Preparing for a dungeon run, or even certain elements within one, seem tailor-made for gacha pay mechanics, and even though the Switch release doesn’t include microtransactions, the result is a very grindy feel to the proceedings. Some of the mobile release’s microtransactions do still appear in this port, though entirely obtainable in-game. In order to take down his former employer Empire Group and get his revenge on Chairman Hidemaru Ayanokoji, Yamada must collect the Three Significant Objects, each of which is guarded by one of Empire Group’s top execs, and then ascend the Chairman’s dark tower itself. The fact that all this takes place in a game he’s programming himself, but somehow affects real life is never called into question. New levels are only unlocked after certain milestones are met, like reaching a certain character level with Yamada-kun — entirely separate from Brave Yamada’s dungeon-run levels. This requires a good amount of replaying previous levels to grind experience points, or to collect gold and loot to pay for necessary equipment upgrades. During dungeon runs, consumable items have increasingly long cool-down timers after each use, breaking entirely after a sufficient number of uses, so it’s necessary to replenish stock as well. 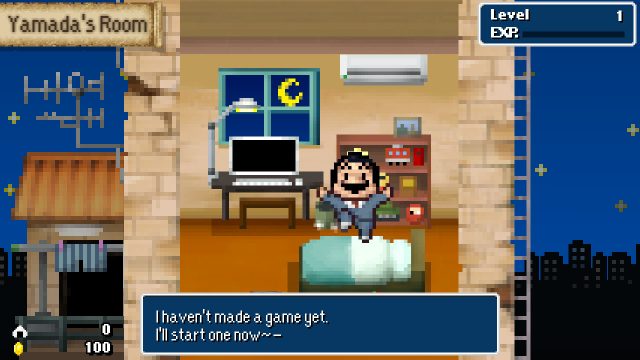 Yamada is a simple man, living in a simple apartment, programming a simple game.

Breaking up the individual dungeon runs are scenes that take place back in Yamada-kun’s tiny apartment, where he is hard at work coding at his computer, usually in nothing but his boxers. This is where, via different menus, players can make the aforementioned gear improvements, purchase new items from a virtual store, check their next in-game milestone requirement, or send NPCs known as Broke Questers on their own off-screen dungeon runs, netting the player more items at the cost of gold. There are also a number of ancillary dungeon levels to unlock for the purposes of grinding exprerience, loot, and gold, though these are virtually indistinguishable from the main campaign dungeons in appearance and gameplay. Despite what sounds like an impressive amount of optional activities, the core dungeon-crawling gameplay, sadly, isn’t varied or entertaining enough to carry the game all that well.

Dandy Dungeon purposely aims for a low-fi, pixel-art aesthetic, though sprites are relatively well animated and clearly convey action and emotion, even if that emotion is comically over-the-top. While it’s not mind-blowing by any means, fans of pixel graphics at least won’t be disappointed by the effort on display here. The music is the same — good, not great — and evokes the feel of, say, a session of classic 8-bit Legend of Zelda, being at once simple and even going so far as to be catchy at times, though the high amount of repetition does its fair share at lodging some tunes in the player’s head. What passes for voices, however, is enough to cramp the ear muscles of the most forgiving critic, with individual syllables of spoken Japanese looped in random patterns to approximate speech. It’s immediately off-putting, and only blends in somewhat due to the ridiculous characterizations and tongue-in-cheek nature of the game as a whole.

It’s hard to recommend Dandy Dungeon on the strength of any one of its aspects. The gameplay is designed to be repetitive, and does too little to appeal much to either those interested in dungeon-crawling combat or puzzle-solving. The story gels well with the comically exaggerated pixel graphics and silly music, and delivers a good amount of cheekiness, though it’s unfortunately eclipsed by the game’s large amount of grinding. In the end, it’s not a terrible game, but its idiosyncrasies don’t push it beyond average, and may be too much for many gamers to swallow.