Back when the RPG floodgates were opened on the PS1, plenty of titles crossed the Pacific to relatively little attention and are poorly remembered today. Brigandine: The Legend of Forsena definitely fits that description, a 1998 Atlus USA release of a Hearty Robin title that provokes few reminiscences even from the dedicated tactical game audience. While Brigandine is distinctive even today, most of its concepts were executed better in other games, and the package is not made more enticing with its constant reminders of how Atlus localizations have changed in the intervening years.

Brigandine is structured similarly to the venerable Saturn title Dragon Force, putting the player into the role of a monarch who must conquer every other nation on the continent of Forsena. A total of six nations are available, and unlike in Dragon Force the heads of state do not unite to face a common threat at the end — instead defeated monarchs permanently exit from the scene and take most of their retinues too. Two or three extra commanders will join upon the defeat of each nation, but this is ample to allow victory considering Brigandine‘s method of combat.

Though each castle on the landscape can hold an unlimited number of soldiers, when a fight comes no more than three commanders and their troops on each side can participate. All the rest of the castle’s occupants or attacking troops gracefully accept the defeat of their comrades and retire from the field, which is certainly a unique interpretation of esprit de corps. The onus is on the attackers to produce results, since a twelve turn time limit exists that forces the offense to withdraw after being exceeded.

Actual combat bears more resemblance to the barely-played Sega CD title Dark Wizard, since its grid setup is hexagonal instead of the usual square tiles. Commanders march into battle supported by various mythological creatures that serve as their soldiers, and in a concept borrowed from Langrisser these troops are notably less effective when outside a visible zone that bestows the leader’s benefits. Monsters killed in battle can never be revived, but commanders merely get injured and have to take a brief break to recuperate — though their monsters can be left leaderless on the field for the enemy to capture upon the encounter’s conclusion. The AI is much more timid than in many tactical games, and will often choose to retreat without having suffered much damage. Only when a nation is backed up against the wall with a single castle will it choose to fight to the finish.

Some class structure is present with all characters, allowing commanders to shift their jobs after gaining a few levels to vary their aptitude. Monsters can do this too, making them much more valuable upon hitting level ten when class shift options become accessible for each species. Replacing dead monsters is no more difficult than buying fresh ones with the funds each castle generates, though since each castle has a specific stock of creatures it can supply the selection is not always desirable. 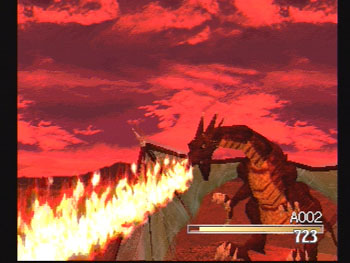 Oh boy, that dragon sure is scary looking. Especially after watching it for 30 seconds with each action.

The game provides no estimate of hit probability or the possible damage dealt when choosing to attack, making efforts to calculate the worth of troops much harder. Two sets of opposing elements are present, but their contribution to the combat is smaller than it could be when even the weakest opponent requires several hits to take down. Most encounters turn into a slugging match, and while it is not stupid otherwise the AI usually decides to exit after taking some losses unless the player is drastically overpowered.

Where Brigandine loses interest is when the proceedings start to feel overly similar. Each encounter takes place on a large stretch of ground that has the castle base at its center, and with the exception of a few battlegrounds that are wet the landscape is pretty much the same everywhere. Since most troops except the airborne ones lose mobility except on the narrow roads, the usual effect is to get a lot of troops strung out along the single-lane road so they can come to grips with the enemy before the turn limit expires. While the direction from which troops enter the proceedings changes, otherwise the battles all blend together due to the similar enemies that must be vanquished in the same way. An elementary grasp of strategy will allow the player to keep castles that may be attacked adequately manned while sustaining an irresistible offensive, one that can fall back on attrition to destroy enemy monsters at an irrecoverable rate.

Organization is a key part of Brigandine, and considering its vintage the menus are adequate. Resupplying a commander with monsters forces visits to several different parts of the menu, however, as does changing a creature’s class and seeing the space it demands go past a character’s ability to manage. Players will also need good memories in battle, because the feature of seeing what actions enemies have at their disposal goes missing there. Everything is intelligible and with a little practice can be used efficiently, at least.

What Brigandine supplies in large quantity is incentive for replay, should its mechanics hook a player. By offering six countries with which to conquer the continent, the scenario varies dramatically. Three difficulty levels are also supplied, offering something to entice a variety of players.

Forsena’s latest troubles spring from the decision of Zemeckis, battle-hardened commander of Almekia’s military, to take the mantle of ruler for himself. The result is a continent-wide conflagration with all six nations seeking sole control. Dark forces were behind urging Zemeckis’s actions, but the true architect of the continent-wide conflict is never fully addressed even by the story’s conclusion. Except when beginning the game and after conquering another nation, plot occurrences are limited to putting two commanders with something to converse about into the same location. Most of the characters composing a nation’s army have nothing to say after joining up and remain ciphers throughout the game. 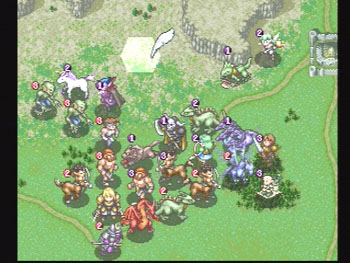 Atlus of the 1990s was a different company than it is today, and the localization does Brigandine no favors. Occasional typos and constant clunky grammar plague the text, though the small favor of events not being rendered incomprehensible is achieved. A better translation wouldn’t have overcome the lack of much dialogue to start with, but had a chance of turning what plot passages do occur into something entertaining instead of uninteresting.

The option to turn off combat animations in Brigandine is most welcome. The polygonal things depicted are not particularly ugly by PS1 standards, but they eat up a good thirty seconds each time, which serves to extend playing sessions to a horrendous degree. Otherwise this title could easily have been done on the Super Nintendo, with a small assortment of landscape visuals and a propensity to have character portraits talk about events instead of showing them at all. The aural aspects are likewise unimpressive save a decent variety of sound effects when units move, with the compositions being small in number and unmemorable to boot.

I can appreciate Brigandine for sporting a unique flavor in the tactical realm. I couldn’t help thinking during the experience of taking Norgard to victory over the continent about how samey everything was starting to feel though, and in a tactical game that’s never a good sign. When there are plenty of more worthy strategy games I have yet to experience, it becomes apparent why this one is so poorly remembered and Hearty Robin is not a developer with wide name recognition.