Wait, I See a Rock

Job-centric RPGs, once commonplace through the Super Nintendo and PlayStation era, have lately fallen mostly to indies with varying levels of success. However, occasionally a title like Bravely Default II comes along, merging together classic gameplay with modern game design, a bevvy of job classes, and a believable fantasy world into a polished package. While the game suffers from some of the same problems as previous entries in the series, there’s also much that’s been improved since the two 3DS titles.

The battle system continues to be the shining star of the series, with classic turn-based combat combined with its titular Brave and Default commands which allow players to store up or unleash multiple actions in a single turn. Characters can perform up to four actions per turn, ranging from physical abilities to magic casting, item usage, and more. Being able to go all out and perform multiple attacks per character means normal enemy encounters can be completed in short order, and visible enemies on-screen allow players to dive into or dodge combat as needed. Stacking multiple actions also means players can take advantage of using multiple restorative items or skills, such as resurrecting an ally and replenishing their health within a single turn, or throwing around multiple buffs and debuffs to ensure a foe’s powerful attack lands softly.  Enemies will also Default to both save up turns as well as lessen the damage party members can dish out against them.  However, players do need to take care, as using Brave without adequate turns saved up will cause them to fall into negative turns, leading to a number of inactive rounds while their turn counter recovers. 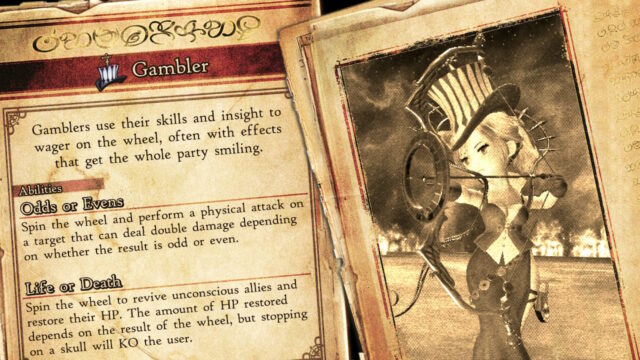 Unlocking new jobs is a core tenet of progression, though some are better than others.

As players progress through the game, key foes will drop job Asterisks, which unlock new jobs for the player to assign to their party of four. Each character can take on a main job will that accrue job points (JP) as players defeat foes small and large, plus a sub job, which will not gain any JP but lets the player utilize any skills that they have previously learned. Gaining job levels will also unlock passive abilities that can be equipped regardless of the current job. Abilities serve many different roles including increasing JP earned, determining how long effective positive buffs and negative stat effects last, as well as allowing players to break the game’s 9999 damage cap. Certain abilities also tie into the game’s day-and-night cycle, and encourage players to fight at certain times of the day. Many mobs will also have counters to specific actions, such as magic or physical attacks, or even the use of any abilities, and players will need to adapt to these challenges as each crops up.  Changing jobs and setting up new abilities can be done quickly and efficiently in the game’s intuitive, easy-to-use menus.

That being said, combat isn’t without some flaws, largely centered around the game’s bosses. Players may find the jump in difficulty and HP pools between normal enemy encounters and boss brawls to be disconcerting. There are also rare enemy encounters scattered around the world, which players can challenge at any time, including a difficult foe intended for very high-level parties being right outside the game’s first town. While these enemies glow faintly red to indicate they will provide a challenge, that isn’t helpful for those who can’t see the colour. There’s also little regard to class balance, and an early available class (Thief) has skills that dominate the entire length of the game. Furthermore, while absurdly powerful at the start of the game, elemental magic quickly falls off as a viable damage dealing option.

The game’s story is delightful, yet largely predictable for anyone who’s played plenty of JRPGs, or even just the previous two games in the series. Set in a brand new world, with an entirely new cast, four adventurers join forces to recover the powerful elemental crystals, which have been stolen from their guardians and are currently causing major effects in the world, in addition to collecting as many Asterisks as they can. As Asterisk holders stand out as colourful costumed characters, it isn’t a big guess to figure out who the purported bad guys are, and each is quickly shown to have some character flaw worthy of being beat down for. The one thing standing out as superior from past Bravely Default games is that the trigger for further continuation of the game is no longer muddy, and players can continue past the first set of credits with a clear goal in mind. 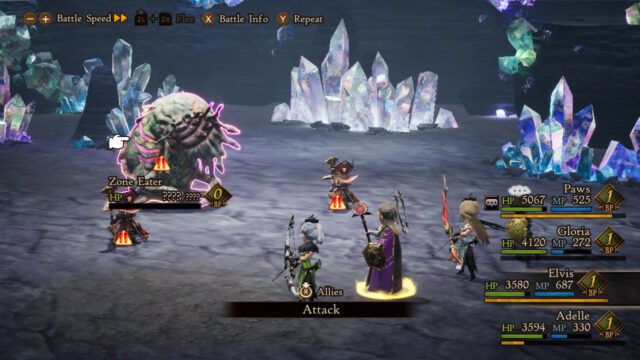 A strong story wouldn’t be able to stand up tall without an equally well-crafted localization, with ample callbacks to classic Final Fantasy titles.

Bravely Default II also doles out one hundred sidequests, though the game lacks a specific critical resource: a quest log. Despite each request being numbered, there’s no way to tell which the player has missed or completed, which is vexing considering how much these optional stories enrich the world as a whole. This is particularly frustrating as some quests only become available at certain times in the game’s day/night cycle, and others unlock in a small window before the final boss fight. It’s easy to miss some quests without repeatedly visiting each town, during both the day and night, every time the story progresses, leading to excessive backtracking.

The game’s narrative wouldn’t be half as touching without being backed by a strong localization. Each character has their own distinct personality, with discernable flaws each must grow past as their tale marches onward. Furthermore, many sidequests tie directly into the main story in unexpected ways, bringing back characters who were part of cities the player has moved past in the main story. This provides a great reason to repeatedly return to see how each is progressing past what led each character to have an Asterisk in the first place. It’s a fantastic way to reutilize a small number of towns, and it’s easy to become attached to characters that at first may seem like throwaway NPCs, after later discovering real personality and depth behind them.

Pairing with the story is music that sets the tone every step of the way. The gorgeous overworld theme is reworked each time the player moves to a new location, with an instrument matching the theme of each region taking the dominant role. This theme of dominant instruments continues in combat, as each hero has an instrument associated with their crystal, which plays under many different circumstances, such as when using powerful abilities during combat or story moments revolving around that specific character. This also provides a welcome change in combat music, which might otherwise become annoyingly repetitive as so much of the game revolves around fighting enemies; as boss battles in particular can be quite long, injecting a short but interesting musical ditty into the middle of a taxing fight adds dramatic flair. 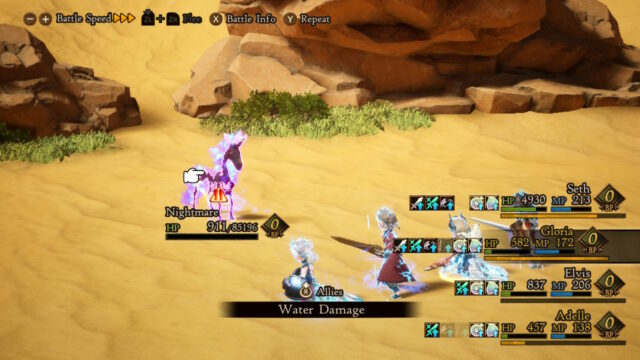 Using Default to save up turns, then using Brave to apply multiple buffs, is a key strategy for tough foes.

The graphics continue to evolve as the series makes the jump from 3DS to Switch, with lush environments ranging from grasslands to deserts and icy valleys to volcanic mountain heights. Bravely Default II incorporates a refined take on classic chibi characters. While this once made the series stick out from the crowd, with numerous successful indie games utilizing the same style, the bobble-head look has gone from a rare sighting to a common occurrence. It isn’t to say Bravely Default II is ugly, but more that the style now lacks distinctiveness after a bevvy of successful smaller titles sharing those same visual cues on the Switch.

Of the three games so far in the series, Bravely Default II quickly became my favourite. Despite the sharp disparity in boss difficulty compared to random encounters, it was easy to get into a rhythm of moving from area to area, conquering foes and acquiring new jobs, then grinding to unlock all the new abilities available. The story, while predictable, is still solid with an excellent feeling for both irreverent and serious moments. I often hummed along to the game’s many songs, and I can clearly picture the game’s various regions and the little ditties that went along with each biome. With an all-new cast, it’s also the most approachable, and comes highly recommended. Though the game can be completed at a much faster pace than I managed, my nearly 80 hours with the game are ones I have no regrets spending. For those looking for a throwback JRPG with heart and an addictive combat system with the ability to blend together job combinations, there’s nowhere else to turn.