In the last two years, I have had a rocky relationship with my beloved developer, Gust. I’ve always been a huge advocate for their games, and though I had a rough go with the last two Atelier games, and enjoyed but wanted more from Nights of Azure, I found my support waning somewhat. When Blue Reflection was announced, I was overjoyed because it was time for a new IP from a favourite developer. Playing it, however, left me with some very mixed emotions.

Players are thrust into the delicate shoes of a former ballerina, Hinako Shirai, who unfortunately suffers from a leg injury, destroying any possible hopes she had of becoming a professional dancer. Hinako falls into a heavy depression, believing that the only piece of self-value she has comes from being a ballet dancer. On her first day at her new school she meets two delightfully strange young ladies, Yuzu and Lime, who have secret powers. They recruit Hinako by telling her that if she helps them stop the negative emotions plaguing the real world and the magical world of ‘the Common’, that she may be able to regain the ability to dance again.

Blue Reflection is a story of friendship and self-reflection. It’s looking at our relationships and being able to put ourselves in other people’s shoes and trying to make positive change. These important themes are wrapped in a wonderful magical girl package that does a great job of projecting the larger story Gust wanted to tell. The story focuses on personal growth and how our interactions with people allow progression. Blue Reflection reminds us that our emotions and feelings are important and if they go invalidated, they can become a destructive force.

These themes and relationships that grow in the story are wonderfully executed and players get the sense that when Hinako is helping both friends and acquaintances in her spare time, that she genuinely cares and wants to be a part of the healing process. This makes for interesting storytelling that is grounded, while using the fantastical elements to remind players that we as humans provide greater strength and can wield it when situations call for it. There’s great messages and interaction throughout the game, but it is plagued by one issue: a very awkward localization. 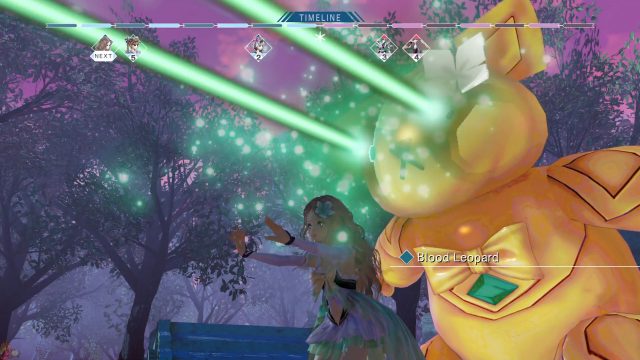 Part of the localization issues come from the fact that it looks sloppy on screen. Typos litter the text, or words are cut off and moved into the next part of the sentence. It feels awkward to read when these aspects are visible. While there was effort in keeping the themes intact, there are moments where some of what the characters would say just plain are awkward, reading a bit too literally. It’s a serviceable localization that suffers from feeling too rushed.

One aspect that doesn’t entirely feel cohesive is the gameplay in Blue Reflection. In fact, it feels half-baked and uninspired. Most of the game will have Hinako taking on random missions to help her classmates in the real world deal with whatever emotion is plaguing them by jumping into the Common to help them solve the problem. The larger issue with this is that the whole game is built on repetitive tasks that just plod the game along. The main set of tasks players complete are collecting feeling fragments or defeating X number of monsters, or dealing with a specific foe. Players are rewarded points and when a certain point value has been achieved the main story progresses for a short period of time, making the game boring until larger story points are hit.

Furthermore, the game lacks a direction. Hinako can go for days without completing tasks and just hang out with her friends, but then the game will say there’s a limited amount of time before the real world will be invaded by monsters. This kills any sense of urgency that exists in the game’s world, meaning players can spend as much time as they like seeing their relationships build, but there’s no consequences either in taking as much time as players want to do things. While developing relationships in Blue Reflection leads to some interesting story beats that are very slice-of-life, the idea that the world is ending never feels apparent until the game remembers that there are large evil foes needing to be slained. Plus, hanging out with friends, going to the same sets of locations, and seeing nearly identical dialogue for each place just adds nothing other than more padding. Which is a shame given that this is the main bulk of the game. The only added benefit to hanging out with friends is that after a few hangouts, players will receive a memory fragment from each friend and those fragments offer skills and bonuses in combat. It just takes awhile to get them if it isn’t based on the main story.

Blue Reflection has promising elements outside of its storytelling, such as its growth system. While there isn’t a conventional leveling system, players can use growth points to decide how they want Hinako, Lime, and Yuzu to develop in combat. Arranging their growth points determines what kind of skills they will inherit, be it attack, defense, or support based. It’s a good, versatile system that allows for players to mix and match without feeling like they’ve hosed themselves by not creating a specific build for each character. It’s a very open system that offers experimentation and fixability. Couple it with the memory fragments that the player receives from building relationships with Hinako’s friends and it makes for an interesting system on the whole. 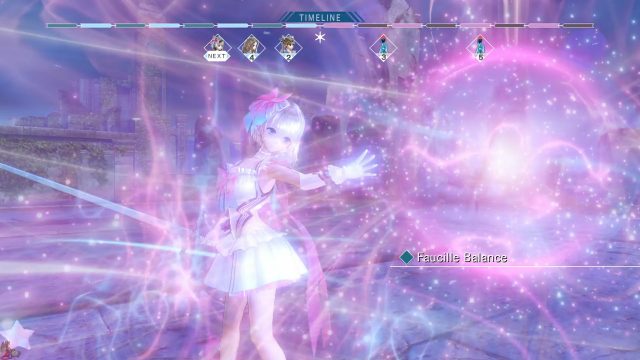 The battle system in Blue Reflection also shows a ton of promise and offers some interesting changes to turn-based combat. Each girl takes a turn by using skills that consume Ether. Ether can be restored by recharging it and forgoing an action that turn. The turn order is displayed at the top of the screen and characters who are in the centre can perform an action or link actions together. Hinako, Lime and Yuzu all possess skills in their arsenal that knock enemies back and change the turn order. They can also change the turn order timeline by sacrificing some of the reflect gauge, which is used for a variety of moves such as Overdrive, a skill which allows the heroines to perform up to three actions in one turn.

During large boss battles is when combat gets interesting, as the relationships that Hinako forges throughout the story come into play. Hinako, Lime, and Yuzu can call upon the help of their friends to perform additional actions during boss battles, from throwing a basketball into the boss’s face, to providing first-aid when necessary. Each girl can have up to four companions help them in battle, and if the tide of battle goes in the boss’s favour, these friends will ditch the player during combat to regroup. These larger scale boss battles are far more interesting than any normal encounters because players need to be perceptive to what is happening to succeed.

An area where Blue Reflection shines is its music. The soundtrack has whimsical elements to it when players are in the Common, and a more serene tone when players are in present day Japan. The music accompanies the plot points very well, and it doesn’t grow stale given the game clocks in at under twenty hours. In terms of visuals, character models and use of colour are always a strong suit for Gust, though Blue Reflection suffers from too much recycling in terms of enemies and environments. There’s not a lot of exploration in the game, and players visit the same handful of locations that already feel uninspired. It’s a serviceable looking game but doesn’t do anything to stand out visually.

While I am being very critical of Blue Reflection, I didn’t hate my time with it. It’s a game that has a lot of promise, but feels cheaply made. There’s some great ideas that are overshadowed by gameplay elements that don’t add anything meaningful to the overall experience. While I loved the overarching themes and the characters, those elements were outshined by boring, repetitive gameplay, with boring and repetitive tasks that felt directionless most of the time. I can only hope, if a sequel is made, that Gust refocuses on how they want to make the gameplay interesting, because as it stands Blue Reflection lacks meaningful gameplay that doesn’t work well with the storytelling it is attempting to provide.