To say that big things were expected from Blue Dragon would be an understatement. With three of the biggest names in RPGs behind it, including the creator of Final Fantasy, the single most popular and influential RPG franchise in the world, Blue Dragon had a huge, almost impossible amount of hype to live up to. It should come as no surprise that the hype for the game was greatly exaggerated, but while Blue Dragon fails to be the greatest RPG of our time, it succeeds in its own ways and manages to set a new standard for many of the aging RPG traditions. Also, there is poo.

Blue Dragon is a story about perseverance, and the theme runs deep throughout its thirty-five hour campaign. Right from the start the player is regaled with the plucky protagonist’s signature catch-phrase: “I won’t give up!” The phrase is repeated at regular intervals throughout, and while it becomes extremely grating rather quickly, its importance to the story later on makes up for it, and in fact heightens one particular moment dramatically. The tale begins in the village of Talta, where every year for the past ten years an eerie violet mist has enveloped the town, bringing with it a destructive land shark which decimates the buildings and generally wreaks havoc. Enter Shu, a spiky-haired young boy who is determined to put a stop to it. With the help of his friends Jiro and Kluke, they manage to subdue the land shark and soon find themselves dragged into the bowels of a mighty airship controlled by the evil Nene. It is here that the three would-be heroes gain their magical powers – their shadows; strange blue animals that emerge from their shadows and give them strength in battle.

The story seems to be split into two parts; the first half of the game involves exploring and learning about the world of Blue Dragon. The player will visit many fanciful and bizarre locations that could only have sprung from the wondrous mind of Hironobu Sakaguchi. From the Swiss Family Robinson-inspired jungle gym of the dancing Devee tribe to the ancient city inhabited solely by sentient two-dimensional wall paintings, Blue Dragon presents a fantasy world unlike any other. The second half of the game focuses more on the villain Nene and his intentions for the world, and of course Shu and company’s attempts to put a stop to it. The two parts combine beautifully towards the end, bringing past and present together to create a spectacular ending sequence that’s full of excitement and even a few surprises. Unfortunately, the story starts off rather slowly, with very few plot points being introduced until almost the end of the second of the three discs. While this can lead to some detachment from the game at first, once the hook is set it becomes difficult to escape. 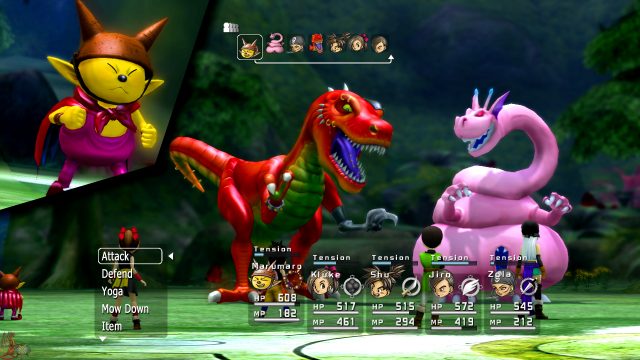 Taking its roots from traditional Japanese RPGs, Blue Dragon has at its core a very simple turn-based battle system, but a number of twists both in and out of battle allow it to stand out. The most significant addition to the standard turn-based fare is the ability to charge attacks and spells to do more damage. In addition to that, however, it also delays the character’s action, essentially allowing you to determine the order of your turns as you see fit. While it sounds good on paper, actually making it work is another question entirely, and involves some rather precise timing.

Random encounters have been done away with, replaced instead with the new standard of having battles begin by striking an enemy on the field. This leads further into several of the other new features Blue Dragon introduces, most prominently the encounter circle. By utilizing this circle, which extends in a radius around the main character, multiple battles can be started simultaneously, providing stat bonuses after each fight and additional gold at the end of the encounter. Even more interesting is the ability to pit monsters against each other. If two opposing groups of monsters are within the circle when you begin the fight, they will attack each other rather than you, making things much easier. Finally, there are also special Field Skills which can be acquired, and can produce various effects on enemies before the battle begins, even defeating them outright.

Despite having all these unique new additions at their disposal, it is disappointing that they weren’t used more often. Monster battles are infrequent and there are only a small handful of field skills in the game, most of which are useless. There are other strange, often questionable design decisions in the encounters as well, such as enemies which are essentially free experience. These enemies are generally worth a rather large amount of experience points and do not attack the player, but rather heal him. There are even some that go so far as to kill themselves, which is a truly bizarre concept. Finding and abusing these enemies makes the game significantly easier than it should be, and also allows and encourages the player to go out of his way to avoid other encounters.

Even so, Blue Dragon‘s combat manages to be quite enjoyable, and the game is home to several of the most intense boss sequences in recent memory. While these encounters are usually not terribly difficult or innovative and are generally relegated to a standard heal and attack strategy, they nonetheless provide plenty of tense moments and spectacular attacks. What’s more, enemy weaknesses are usually fairly visible, and it’s often possible to simply guess what attacks will be effective based on their appearance and basic logical assumptions on the part of the player. Machines, for instance, are logically weak to water attacks. There are also weaknesses that are a bit more subtle, and can often be rather unusual. Using a wind attack on an armed goblin can cause their weapon to blow away, while drenching a stone poo snake with water can soften it up for physical attacks. 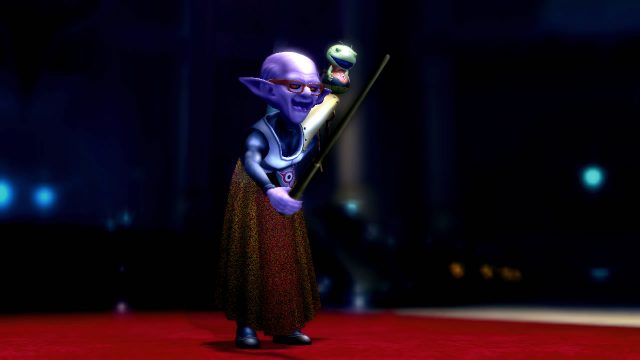 Get outta here you damn kids!

Blue Dragon also houses a simple class system, featuring nine classes which can be equipped and trained by any of the five playable characters. As each class advances, new skills are acquired, and once learned they can be mixed and matched with skills from other classes, allowing for virtually unlimited character customization. The drawback, unfortunately, is that eventually all characters devolve into one of two basic archetypes: a caster, or a fighter. Regardless, since there are no reserve characters to provide a reason for specialization, this doesn’t affect the game play very much, but it does serve to remove some of the depth from an otherwise excellent system.

The visual draws of the game are probably one of its most obvious highlights, featuring Akira Toriyama’s acclaimed character designs strewn about a majestic and unique world. Gorgeous on both a technical and artistic level, the graphics are truly the game’s high point. The one flaw comes in the form of camera blur, which is used to great effect during cutscenes, but very poorly during game play, where it shouldn’t even be used at all. If the camera comes too close to Shu during the game, the entire screen blurs and it becomes difficult to see anything. Combine that with some small rooms and a player-controlled chase camera, and you have a recipe for disaster.

With a score composed by Final Fantasy‘s Nobuo Uematsu, the quality of Blue Dragon‘s soundtrack is very good, but unfortunately poorly presented during the game. Several tracks are overused, particularly the boss battle theme, and most of the better tracks are only heard during key story sequences. The voice acting is well-done, and bilingual players will be pleased to know that both English and Japanese language tracks are available. Even more surprising, localized versions for countries with multiple national languages contain additional language tracks. Canada’s, for instance, has French voice-acting available. One particularly bizarre piece of sound that will likely immediately irritate the player is a text-to-speech voice that announces whenever something happens on the field map, such as an enemy being defeated or an enemy detecting your presence. Thankfully, this can be turned off in the menu.

For a game spanning three DVDs, Blue Dragon is surprisingly short, ending after only thirty to forty hours of game play. This is only for the story, however, as there is a staggering amount of additional content to explore, as well as a wealth of Xbox Live achievements to unlock. Virtually every object in the game world is searchable; gold, items, and even experience can be found in most of them. Finding all these things can easily add hours and hours of playtime, and to top it all off there’s the promise of downloadable content via the Marketplace in the future.

Blue Dragon is a solid RPG experience that fans of traditional JRPGs such as Dragon Quest and Final Fantasy should be able to enjoy, though a few flaws and poor decisions prevent it from being truly great. Despite its slow beginnings, an incredible adventure can be found should one delve deep enough into Sakaguchi’s poo-filled world. Let us hope that Mistwalker stays true to the game’s edict and makes the next installment something to remember.