Let’s get one thing out of the way immediately: this game is not going to be for everyone. It is an impressive homage to the 16-bit era of console RPGs, but ends up going too far in its emulation. For every nostalgic flourish or reawoken memory of the past, Black Sigil: Blade of the Exiled features a generous helping of the tedious, unenjoyable aspects that marked the RPGs of yesteryear. Playing Black Sigil is like discovering a long-lost contemporary of Final Fantasy VI or Chrono Trigger, only to be struck with the shaky dialogue, rampant bugs, and mind-numbing encounter rates of the 1990’s less-celebrated offerings. The story is compelling and the characters are enjoyable, but there are enough slog spots that RPGamers will no doubt remain divided on the game.

Kairu of Bel Lenora is the story’s nominal hero. He’s kitted out with the traditional trappings of the role: mysterious sigil on one hand, less personality than any of his eventual travel companions, and he’s an orphan. Instead of being the Chosen One though, the genre-favorite, he’s a pariah in his icy, magic-centered homeland. Unable to cast the simplest of spells, Kairu is a magical dead-zone. The last person to hold that distinct honor was Vai the Magic-less, villainous warlord and wannabe usurper. Uh oh.

Kairu soon encounters other, more interesting companions. Although their dialogue is never quite snappy enough to keep up with their situation, the overall party dynamic is strong. These aren’t just a bunch of mooks who’re traveling in the same direction; they interact with one another and respond organically to each others’ situations. The characters are familiar archetypes such as the spunky “princess” (with a whip!) and the good-natured treasure hunter, but they develop individuality by the game’s close despite this. (Well, except for Kairu.)

Dungeons are large, non-linear, and festooned with secrets. Black Sigil is very much the sort of game that completionists will need to take slow. These brave souls will need to hug every wall, and talk to every tree, pot, and bookshelf if they hope to fulfill the numerous endgame side-quests. This presents an unfortunate bind, as the encounter rate is so high that dedicated exploration takes the patience of a gargoyle. Black Sigil reaches its full potential in terms of humor, characterization, and scope during these optional segments, so it’s a shame that accessing them requires so much tedious work. There are enough unmarked (or impossible to discern) locations on the world map that coming across a new area feels like unlocking a secret, rather than moving along a straight line between two points. 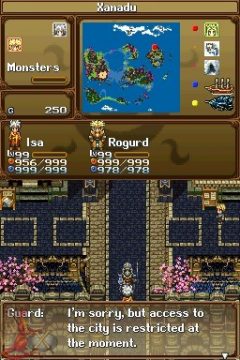 Protip: Speed up the game settings to avoid bugs.

The two most frequent complaints levied against Black Sigil pertain to its combat system. The first is its atrocious random encounter rate. Even with the accessory that decreases enemy encounters, it’s not uncommon to flicker from one battle to the next before the screen has reached its neutral state from the first one. The only saving grace of this unnecessary grind is the relative ease of running away. That said, holding down the B button until one’s hand cramps is no way to go through life.

The second major combat-related complaint pertains to how the battle system is set up. Once combat begins, the characters and monsters are placed on a turn-based, gridless field, as in Chrono Trigger and Lunar: Silver Star Story Complete. Unlike the two aforementioned games, the field is often cluttered with rocky outcroppings, chasms, and small architectural features that restrict the flow of combat. Often, one party member is large enough to block the other two from getting involved in a fight unless they resort to ranged attacks or special techniques. Repositioning characters tends to result in a loss of turns with minimal gain. While this can get annoying, it’s also an ideal juncture for tactical thinking. Characters’ special maneuvers have varying areas of effect, so rushing into advantageous placement or herding the enemy into the path of an especially effective spell can be rewarding.

Given a proper sense of flow, the battle system would have been far more enjoyable. The rest of the interface fares similarly. While the game provides several welcome opportunities to rotate its eight playable characters into three active battle slots, handling their items is a chore. No matter how many of a specific item is in the player’s inventory, only one character can carry that item into battle. Unequipping and reequipping key items makes switching characters a chore. To further the aggravation, active parties can only be rotated at save points or on the world map. They can still pool skills outside of battle and are shown to be traveling in a group during story segments, but swapping from the initial away team in the middle of a dungeon is not possible. Not everything about the interface provokes uninhibited whining, however. The quick-save feature is easily accessible and well implemented. Weapon and armor management is also well laid out, making preparing for certain elemental-heavy battles a snap. 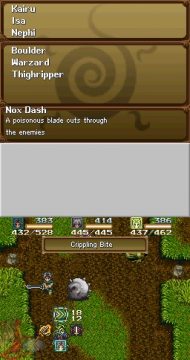 Hope you hate rocks. You’ll spend a lot of time fighting them.

With respect to graphics and sound, the experience is a pitch-perfect celebration of RPG history. The music is familiar without being apish or painful. There aren’t any standout tracks though, unless one is to count the all-too-familiar sound effect library. As with the primary game font, these brief clips are subtle reminders of a stickier time, when objects were much more difficult to reach. Character sprites are crisp and expressive, providing humorously exaggerated emotions that nevertheless work. The in-dialogue portraits function similarly, featuring enough different poses to match the moods required of them. Dungeon sprites are complex and enjoyable to look at, easing the conflicted path of the explorer.

Before wrapping this bad boy up, it would be most grievous to not expound briefly on Black Sigil’s bug issues. Freezes are common, and while there are oft-recognized places where they have been known to occur, not all of them are as easily categorized. The most egregious bug, at least to fans of improbable marine life, is one that makes unlocking the final combo attack for two characters impossible. While many of the bugs can be bypassed by setting the dialogue speed and battle speed to their highest settings, the combo in question is forever locked away. Layered on top of the frequent encounters and variable difficulty, the bugs make this a difficult game to recommend to everyone. Nevertheless, it displays personality, humor, and an understated love of the genre that save it from abject wretchedness. Nostalgia fans, take heart: Studio Archcraft is looking out for you like a drunk, slightly misguided uncle.