Nobody expected Joe Madureira to start a Kickstarter campaign in 2015 for a game based on his late ’90s Battle Chasers comic book series. While very well received, the comic series only saw a handful of issues released, and that was nearly twenty years ago. The campaign, however, was quite successful, and work on Battle Chasers: Nightwar began, with development duties handled by Airship Syndicate, a new studio formed by Madureira and other former Vigil team members. Dismissing Battle Chasers as nothing more than an indie Kickstarter project, however, is selling it miles short of its outstanding design ethos. The game is a blast to play, with a deep and equally engaging combat system that is a love letter to old-school JRPGs even as it one-ups many genre conventions. In terms of quality, it even outpaces many AAA titles on the market today — no small feat for a small team working on an aging license.

Though the game is designed as a continuation of sorts to the comic book, no prior knowledge is required to get sucked in to the experience. The story begins with all five of the Battle Chasers aboard an airship when they are ambushed by a band of ruthless sky pirates, their ship shot out of the sky in the ensuing fray. Plummeting down and washing up on the shores of the mysterious Crescent Isle, the group is splintered apart. Players take control of Gully, a young girl with fiercely powerful battle gauntlets, and a large chunk of the early game revolves around “getting the band back together.” While the narrative does eventually expand into something more intriguing to sustain interest during the forty-plus hour campaign, it doesn’t generate a lot of excitement on its own.

Luckily, the serviceable narrative is beefed up with a goodly amount of in-game lore and world-building. Crescent Isle has a history, uncovered bit by bit through the many notes and documents found scattered all around the island. Letters between mercenaries, historical codices, miners’ journals, and war-time diaries written on the front lines all serve to paint a much richer tapestry than the story itself does. The way each of the game’s eight dungeons is informed by the events in the story is also very neat, and each one has a unique feel that is further enriched through lore before the player ever enters it. There’s never a feeling that these are just a series of locations that must be visited to further the game’s progress. In short, Battle Chasers: Nightwar is an interesting arcanepunk world of vampires, ghouls, gargoyles, magic, and bullet-spewing machinery, with a lot of bonus lore for those willing to look for it. 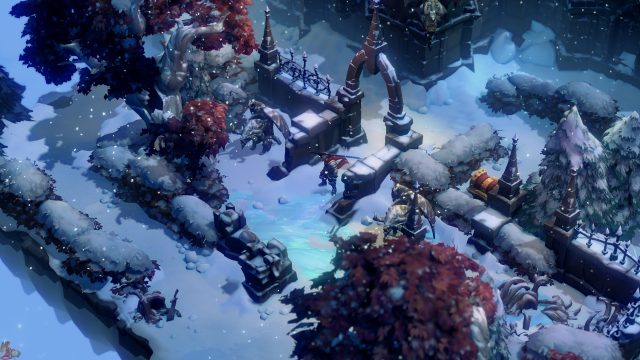 Pretty? Sure. But serene and peaceful? Yeah, right.

But Battle Chasers: Nightwar‘s true ace in the hole is its battle system, which has enough variety and depth to act as the foundation the game is ultimately built on. Combat very closely resembles the Conditional Turn-Based Battle System found in titles like Square’s Final Fantasy X. Order is based on each combatant’s speed stat, and is represented by a timeline of character portraits. With only a couple of options available to use in combat at first, early battles are a little monotonous, but more and more interesting wrinkles get added in as the opening hours pass by. By the time all six party members are assembled, the combat system has expanded so much as to become one of the game’s most enjoyable features, even making grindy leveling sessions enjoyable.

Each character fills an archetypal role in the party, reflected in the type of abilities they have access to. Gully is the all-round protector, while the lumbering war golem Calibretto takes care of heals and status ailments. Garrison, the knight, is a deft damage dealer, while his scoundrel counterpart Red Monika focuses on inflicting debilitating ailments on the enemy. The mage Knolan straddles the line between healing and damage-dealer, and the all-new Kickstarter-funded character Alumon utilizes blood magic which devastates the enemy, but at a cost to himself. Since only three characters are permitted in battle at any given time, putting a party together becomes an interesting trade-off of strengths and weaknesses when deciding who to take into any given dungeon. Add to that the game’s considerable challenge — enemies are no push-overs — and the fact that experience isn’t awarded to anyone outside the battle party, and players will find themselves rerunning dungeons quite a bit to keep everyone at least in semi-decent fighting shape.

Apart from each character’s natural predisposition, combat also makes use of a plethora of interesting systems. To start with, each hero has certain basic Actions at their disposal, beginning the game with a basic attack and defend move, though more are unlocked as the character gains levels. In addition to dealing damage, many of these Actions also have secondary functions; Calibretto’s Gut Punch, for example, makes enemies susceptible to bonus damage for a certain time. More importantly, these actions all build Overcharge for their owner, which is a temporary amount of mana that is tapped before any actual mana is depleted. This, in turn, can then be used to activate Abilities, effectively spells, that run the gamut from healing, to buffs, to damage, each with its own casting time. There are quite a few Abilities to unlock, many of which scale as the character grows in power. Finally, for the direst of situations, there is a shared Battle Burst meter, which is filled by performing actions in battle or taking damage. Over the course of the adventure, each character can learn up to three increasingly powerful Battle Bursts, which eat up a proportionately larger section of the gauge when used. Finally, Perks provide passive combat skills, but require points to be allocated to them to stay active. 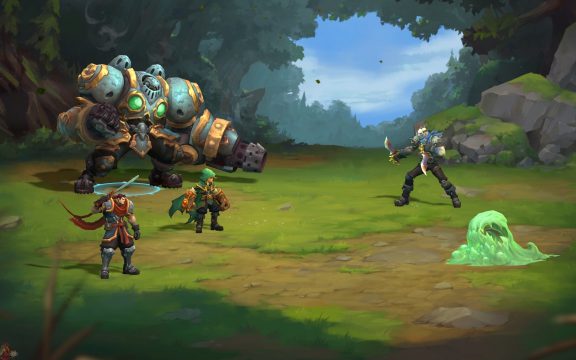 There’s just no moment when I DIDN’T love looking at the characters.

Although there are only eight story dungeons, each will require multiple hours to complete with an optimally-leveled party. Bringing heroes into a dungeon that’s even just a handful of levels above their paygrade is almost sure to end in a party wipe, though the game is pretty forgiving, sending the adventurers back to town and merely docking a hefty chunk of their purse. Dungeons usually retain their state, meaning that not all enemies may have to be refought when returning to it after dying. Dungeons are also procedurally generated, only keeping some puzzles and tilesets consistent while randomizing room and enemy layout, pulling from a pool of in-dungeon events. Experiencing everything a dungeon has to offer requires them to be run several times over. When not grinding a dungeon to bring lower-leveled characters up to speed, an experienced party can always attempt it on Legendary difficulty for better loot and rewards. But the world has lots to offer outside of dungeons: there are a handful of challenging monster hunts which first require the target to be tracked down, a battle arena that offers rewards for top-rank combatants, a fishing minigame, as well as any of a score of side locations on the map, many of which offer some sort of secret to unearth or lore to discover. Towards the game’s end, thorough players will stumble on cryptic clues that, when followed up on, lead to ultimate weapons for each of the six heroes. The list of optional content goes on, impressive not just in terms of quantity but especially in quality — coupled with the entertaining battle system, it makes for a perfect storm that encourages players to complete everything, though the final boss sadly becomes a pushover for a maxed-out party.

Battle Chasers: Nightwar‘s visual appeal is one of its most tangible assets; the game simply looks impressive. It has an extremely colorful, comic-inspired art style, with lush, hand painted-looking backgrounds. Whether walking through a dewy glade, traversing the bleak towers of a vampire’s fortress, or navigating snow-choked heights, environments ooze detail and are a visual feast for the eyes. Even then, they’re still overshadowed by the outstanding character designs the game boasts. All six Battle Chasers are lovingly animated in battle, retaining a heavy comic book vibe, with unique animations for every move, including short cinematic sequences for Battle Bursts. The same level of attention went into enemy designs; a few enemy types are pallette-swapped, but combat animations, including some incredibly detailed death cycles, more than make up for it. Smaller mechs explode upon death, leaving behind a demolished shell, while a late-game repurposed boss is pulled struggling and fighting into a void by bony hands reaching from the nether upon defeat. Even NPCs aren’t short-changed, with about a dozen given full portraits matching the style and detail representative of Madureira’s work, not to mention the six actual Battle Chasers. The overhead world map, meanwhile, has a stylized, sketchpad feel. The single minor drawback is that the isometric dungeon camera is stuck in place, which doesn’t often become a problem, but can occasionally obscure the odd trap or tell-tale sign of a breakable wall. 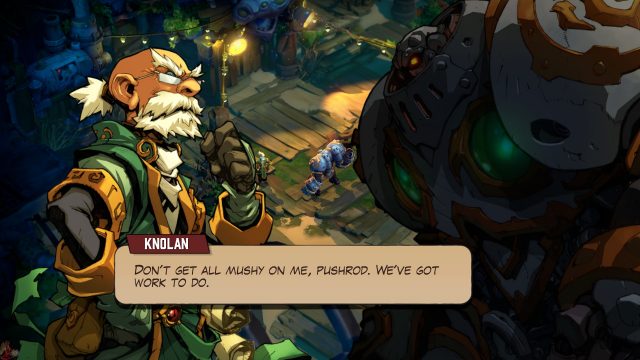 You want big portraits? Good luck even seeing the screen past these guys.

Not to be outdone, the game’s audio component easily keeps pace with the polished visuals. All musical tracks fit the mood the game is going for, at times humorous, often exciting or foreboding, and there is enough variety from region to region to keep them from quickly getting stale. But there’s another hero in the sound department that often gets overlooked in games: Battle Chasers‘ sound effects are hugely satisfying. Loud and crisp is just scratching the surface; there’s a real sense of weight to them, like when Callibretto slams his huge iron-coated fist into the soft flesh of an enemy’s abdomen with a loud thunk, or the audible wind-up before Gully performs a powerful ground slam. The voice acting, which is restricted to key cinematics, is also top-notch. The cast isn’t star-studded by any means — this is an indie game, after all — but you wouldn’t know it from the way the actors are perfect fits their roles, from the snarky to the steadfast. Even the NPCs, who are mostly restricted to a handful of short lines, sound natural.

The release build reviewed also contained a number of bugs, such as game crashes, missing cinematics, and even an MIA boss. However, as of the time of this writing, it appears that all of these bugs have been patched. With those out of the way, there’s just no other way to say it: Battle Chasers: Nightwar is an amazing effort, if anything made more impressive by virtue of being a Kickstarter-funded indie game, and is a testament to what a dedicated and talented team can accomplish. It may not lead the pack in gripping narrative, but presents its comic book license in such visually and aurally impressive ways that other games would do well to pay attention. However, its true star is its deep combat system, which offers so many ways to tinker with and improve party efficiency that it just doesn’t get old, provided players are up for a traditional turn-based JRPG designed by a western team. It’s a game that shouldn’t be missed by any fan of the genre, and is sure to attract a whole new wave of attention to its underlying license.