I freely admit, I’m a Gust fan. Specifically, there’s something about the Atelier series that hits me right in the fun center and keeps me playing. So when I found out that the series was coming to the Nintendo DS, I was quite enthusiastic. Was it all I’d hoped for? Let us see.

Atelier Lise, while not connected directly to any previous game in the series, is still definitely a part of the “core” Atelier series, with an emphasis on item-gathering over fighting. As such, the word “epic” does not really apply when one looks at this game’s story. Like other Atelier games before it, Atelier Lise presents the player with a goal, and the secondary storylines of various characters just sort of happen over the course of a normal playthrough.

Lisette Lander, heroine of the story, has a problem. Her father has somehow accrued a debt of eight-hundred-seventy-million-plus gold pieces, and unless he can come up with the money in three year’s time, the bank will foreclose on the entire Kingdom of Lander. Princess Lisette runs away to nearby Ordre, changes her name to Lise, and sets up shop in the hopes that she can somehow pay off the family debt. The various characters Lise meets along the way each have their own plot points and scenes, some more than others, which helps to spice things up nicely. 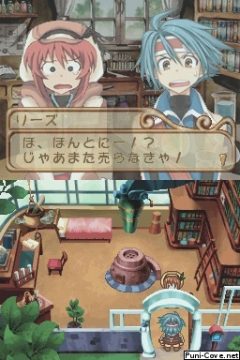 But my allowance is only 2 GP a week

Item gathering has long been a major part of the series, from the simple “visit and see” approach of the earliest games to the more active exploration found in Atelier Judy and Atelier Violet. In early screens, Atelier Lise promised an interactive search game involving the touchpad, but this was apparently abandoned at some point in development. Instead, the player must pan the camera back and forth across the area until either an item or a monster encounter is found. Due to the semi-random selection of items to be found each day, it can be frustrating to find a certain item when it is absolutely critical to do so. There are no fairy helpers to get stuff for Lise in this game, so luck plays a large role in ensuring the proper ingredients are found when they are needed.

Battles in Atelier Lise use a pseudo-tactical system that feels clunky and unnecessary. While characters and enemies can only move one space at a time forwards or backwards from their starting point, they have near-infinite lateral movement, which makes it almost impossible to flank the opponent. The limited number of non-melee attacks leave few options for the player, rendering any potential advantages of a tactical battle system moot. Magic points and battle points have been thrown out, so spells and special techniques now have a charge time of several rounds before they can be used. Several skills, including the healing spells, also have limits on how many times they can be used in a single battle (often, only once). Conversely, the only spell in the game with no charge time or limitations is available near the beginning of the game, and is able to clear a normal battle encounter in one hit. To make things more difficult, the handful of boss monsters, all thankfully optional, have insane hit points when compared to regular enemies. The weakest of the four bosses has ten times the health of the strongest of normal enemies, and takes a long time to whittle down to size. 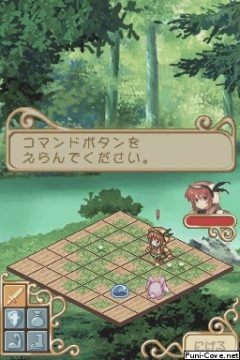 Where’s the cavalry when you need them?

The item management side of things is much simpler in Atelier Lise. Item menus are largely icon-based, and more often than not the kanji have been rendered into Japanese phonetic script, making this game the easiest to read in the entire series. What it gains in understandibility, it loses in clarity as at times there are major ommissions in what the game tells the player about gameplay. In particular, information on special attributes for items is hard to find in the game, and there’s no indication as to which tool brings about which attribute. Lise’s personal level of mastery is also left as an unknown, with only “low”, “middle”, or “high” levels of mastery given. Other unknowns include monster health (the health bars are so inaccurate they’re a joke), equipment attributes and effects, and the knowledge of whether or not Lise currently has the capacity to make items when choosing them from the jobs list. The strange thing is, in many of the earliest screens given for this game, these issues do not exist.

Graphically, the game is a mixed bag as well. Character portraits are well-detailed and the handful of poses for each character are effective in showing their moods, though the game could have done with more of these. The introductory sequence is shown in a comic-book format, which is also very amusing. Would that the developers had used this sort of cut-scene more often, as several of the “action” scenes in the game come off as ridiculous when done with the actual bobble-headed game sprites. In particular, there’s a point where Lise’s bag is stolen, resulting in what has to be the slowest chase scene in the history of video gaming.

Music-wise, things are different. The various tunes of Atelier Lise are well done and, if not memorable, at least pleasant to the ear. The sporadic voice-acting is decent enough, though it gets tiring to hear Lise narrate her workshop activities after a while.

While this game is set up so it can be played with either stylus or control buttons, the stylus is really a necessary choice much of the time. There are parts of the shop and item creation menus which cannot be used without it, and all but two of the title’s mini-games require its use as well. The mini-games occur with some frequency, but are usually quick to finish. The workshop-related mini-games all serve to upgrade or boost item production, while the field mini-games usually net the player larger ammounts of ingredients than would normally be found in a short time. Both sets of games are useful, and they provide a nice break from the regular gameplay.

For all its many faults, however, this is still an enjoyable game to play. The three-year time limit helps push things along nicely, and there is always something for the player to do or make. The game is not incredibly long, and can easily be done in about 25 hours or less. Still, it falls far below what has come to be expected of the series. Fans of the PS2 iterations of the Atelier franchise will probably feel a bit disappointed with what could have otherwise been a good gaming experience.