Playism’s stream of indie JRPGs is home to many titles that showcase their creators’ passions. Bluffman’s Artifact Adventure is a prime example. At a glance, the game is difficult to distinguish from an 8-bit classic like Final Fantasy and Dragon Quest. Even a closer look at its squat pixels make it appear a game displaced from time. Artifact Adventure acknowledges current gaming trends with its branching quests and moral ambiguity, but offers little to the gamer who requires well-rounded characterization or nuanced battle tactics. On the other hand, if thoughts of turn-based combat against all-black backgrounds, open world exploration, and limited inventory space are getting your palms sweaty, this is a good time to keep reading.

The adventure begins by building a party of four to take down the bog-building Swamp King, who threatens the health of the realm. Fantasy RPG mainstays like Warrior and Monk are self-explanatory, but other oddballs among the six selectable classes defy expectations. For example, the Hermit is a fast attacker skilled with bows and medical herbs, while the hippie-like Dreamer is a jack-of-all-trades who can wear any armor. Different party builds decide the importance of acquiring artifacts, gold, and equipment throughout the adventure: a Warrior-heavy party won’t have the MP to take full advantage of the artifacts it finds, but will need top-of-the-line equipment to stay competitive. Each class has different stats, equipment restrictions, and a maybe a passive ability or two. Characters gain their exciting powers from the titular artifacts. 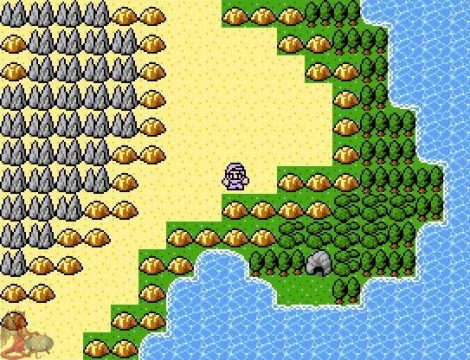 Walking’s for chumps. Of course, taking the airship locks out other treasures.

Artifacts are sentient fragments of power that litter the world. Talking to one grants its power — usually a familiar spell — to the party’s leader. Although this system theoretically allows a lot of flexibility in shaping a party over the course of the game, the reality requires some save-scumming. Artifacts aren’t always forthright about explaining the powers they grant (or how many MP they cost.) On the tactical level, impressive-sounding spell names mask the spell’s important elements: elemental type, number of targets, MP cost, and damage level. Giving a powerful spell to a hero not suited for it can hamstring the party in future battles. Most artifacts are obtained through quests.

If artifacts are the game’s spice, quests are the meat. The Swamp King lurks in the background, but he’s more of a final quest cueing the game is over than an active force. Over seventy quests await the heroes, each of which has 1-3 outcomes. For example, one quest revolves around obtaining poison to kill a deadly beast trapped in a cage. Along the way, a conversationalist tries to recruit the heroes to free the beast on account of its endangered status. Another quest has the heroes working with a treasure hunter to recover a lost staff. Betraying the ally could result in greater reward, or could mean losing everything. Although many of the quests are divided into greedy/safe vs. heroic/challenging options, others deal in more fraught moral choices. The importance of the heroes’ actions is further developed in the game’s ending, where each quest receives a short vignette expanding on the long-term effects of intervention.

Although most of the quests are a variation on the traditional fetch quest or dungeon delve, their presentation is pleasantly varied. The game is rarely judgmental about the choices the player makes, but it doesn’t shy away from showing consequences either. Be prepared for unexpected results. Many decisions must be made without knowing the entire story, which is only revealed in the aftermath. Some results are cynical, others are sweet. Whichever way a quest goes, there’s an opportunity to reflect without impacting an overall “goodness” score or anything of the sort. Ultimately, morality among the pixels is what you make of it. 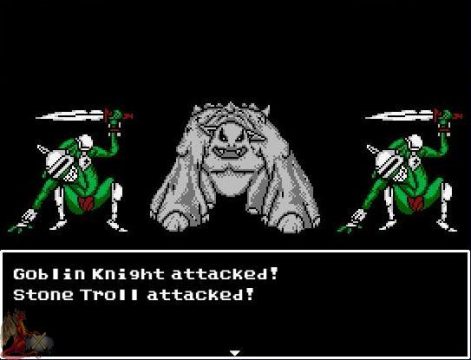 Look at that smiley guy in the middle!

Artifact Adventure‘s presentation is an accurate representations of the early 8-bit era. Anyone nostalgic for first-generation Final Fantasy and Dragon Quest titles should appreciate how far the aesthetic has been taken with the graphics and sound. Everything looks and sounds like an attentive pastiche should. Monster design is the only area where Artifact Adventure reaches beyond its inspiration. There are some wild, expressive enemy designs, especially among boss monsters, which show excellent taste in curating nightmares. On the other hand, even connoisseurs of the console RPG inception may not be as enchanted with the script. Although the quest-givers and other NPCs have different motivations, they’re all flat, compressed entities. Self-serving gangsters and idealistic chefs, alike, don’t have personalities so much as they express desires. This is a world for short visits, not full immersion. Likewise, the font adds a layer of distracting artifice. Although true to its roots, the elevated lowercase “p” looks more like a capital “P.” Although this may seem like a Peculiar nit to Pick, it PoPs uP frequently enough to Push the immersion away by a few stePs.

The game can be completed in about fifteen hours, but invites the dedicated to visit several times. Starting with the first artifact acquired, the shape of the game contorts based on the player’s decisions. Only one of the starting boons can be selected: an airship, the Key of Time, or a collection of stat-boosting artifacts. This choice impacts which areas are accessible as well as dictating the pace. An airship makes casual exploration more feasible, but invites more time grinding than if the artifacts were selected. Regardless of which starting boon is selected, and which quests are solved differently the second time around, replaying Artifact Adventure doesn’t address the repetitive combat or flatness of the characters. The open world offers plenty of adventure, but they’re never without their perils.