When I Grow Up to Be a Man

Arc the Lad was created early in the PS1’s life cycle, but didn’t leave Japan for years because Sony’s anti-RPG and anti-2D stance took a long time to be shut down. As a title that came close to the system’s Japanese launch, it wasn’t going to turn many heads after that policy was finally ended, but Working Designs got the game across the Pacific anyway as part of its Arc the Lad Collection. Given that Arc the Lad ends with a blatant sequel plug without resolving much of anything, experiencing it as part of the compilation instead of a solo product is highly recommended.

Arc the Lad introduces two characters in its opening: Kukuru, the woman from a clan responsibile for watching over an ancient flame on a mountain, and Arc, the young man whose father vanished a decade prior. Kukuru’s response to her upcoming arranged marriage is to petulantly extinguish the flame her clan has been watching, which unleashes a creature that finds Arc looking for his father and easily defeats him. Instead of bleeding to death from his wounds, Arc gets the opportunity to take on mythical power to save the world from the horrible damage humans have been inflicting over the centuries. His quest to do so quickly intersects with that of Kukuru and five other characters who must free all five elemental guardians.

Expectations for RPG stories were different in 1995, and Arc the Lad makes little effort to rise above the many clichés its narrative incorporates. A minister to the king who is blatantly evil, laughably unambitious treatises on the horrors of which humanity is capable, characters who never get enough development to achieve even two-dimensionality, and brevity even for situations that could stand considerable elaboration are the norm. Working Designs contributed an effective translation at least, and the speed with which most plot developments are run through keeps things barreling along. 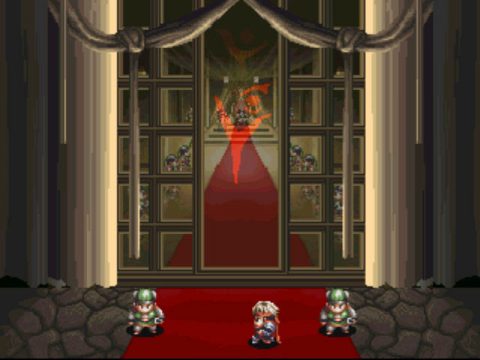 Royal courts are known for pomp and circumstance, but why was a door this size ever built unless elephants were part of the retinue?

In its combat approach Arc the Lad emphasizes speed. Its tactical action operates without menus unless the player wants to use a magic spell or an item, and simply attacking an enemy is done by walking next to it and hitting the X button. Battlefields tend to be compact enough that finishing a fight is quick, and the speedy interface is efficient. An unusual element is that characters cannot walk through each other when navigating, which makes cramped locations require more thought for maneuver. Considering its length, the game does a good job keeping up enemy variety, though almost every fight requires annihilation of the opposing side to win. The only exception to the requirement that everything must die comes in a fifty floor juggernaut of a dungeon, where the player must manually move between staircases to progress with no opportunity to save without exiting entirely. It is fortunate that only going through the first five floors is required in order to proceed.

The simplified interface can be a problem outside of battle though, since only at a fight’s beginning can accessories be equipped or the experience required for a new level be seen. Needing to go through the same scene of airship boarding every time the group leaves an area is bothersome too, since it adds nothing new for each repetition. Aside from putting on accessories there isn’t much character management, although a few additional techniques can be acquired through side quests. Otherwise the only way to affect character performance is through leveling, which is quick given the game’s length.

Taking a little while to grind may be advisable because of the strange difficulty swings, going from a simple beginning segment to sudden danger about an hour in. The challenge veers around a bit throughout, but as the opportunity to take a break for powering up is always around, it’s never unreasonable. Enemy intelligence is not the reason for this, since the opposition will routinely wander around aimlessly or go out of its way to attack from the front when side and back attacks have a better chance of success — the adversaries just hit hard enough to make them dangerous. Even completing all the game’s substantial optional content would not push its length past twenty hours, but barreling through without indulging in side content will reach the finish in under ten. 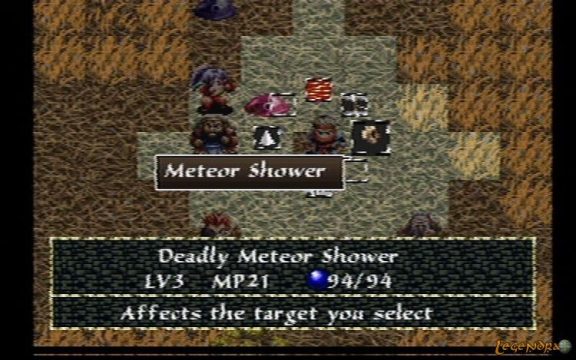 For its duration Arc the Lad comes with an impressive variety of musical accompaniment, with each location having a new theme. The selection of battle music is considerable, and most of the music is catchy enough to be worth hearing multiple times. All seven playable characters have some things to say in battle which were never translated out of Japanese, though understanding it is not integral to the game.

Visuals have aged better than early PlayStation 3D efforts, but only by erring on the side of sprites. These sprites look pretty good and have a wide range of actions, but very little displayed here was beyond the Super Nintendo’s capabilities. The game nevertheless sports tiny load times that never impinge upon enjoyment and quick combat animations that are still effective, which is more than can be said for some of its contemporaries on the same system.

Judged solely on its own merits, Arc the Lad is a breezy trifle. While entertaining for its brief duration, it doesn’t stack up against the heavy hitters in the RPG world of the mid-90s. There’s something to be said for brevity though, especially after playing plenty of RPGs that should have ended before they finally did. Thanks to Working Designs packaging Arc the Lad with the sequel it very obviously leads into, I won’t have to wait over a year for the next installment as the Japanese did.