If It Be Your Will

Sometimes having two sides to one story can be both a blessing and a curse. While dual narratives can be challenging to pull off, often as writers and readers we have to ask ourselves why a story is being told in two or more points of view. Is it because we want to share the same story from two points of view, or do we want to use the same world and tell two separate stories that intersect? In Gust’s latest effort, Ar nosurge: Ode to an Unborn Star attempts to weave two interconnected narratives together to tell a story of creation, loss, and hope. While the two intersecting narratives are the focal point of Ar nosurge, the biggest question is whether or not it was successful, and moreover, comprehensible.

The first point of view is that of Delta and Cass, two partners from Felion who have been tasked to discover a song called Ciel N Protecta, developed by a companion of theirs, but stolen and used to cause machines to go haywire. While searching for this song the pair are captured by the Genomirai Church who wish to use Song Magic a means to change the world for its own means. Meanwhile, the second point of view is that of Earthes and Ion, companions who are trapped in another world and seeking a means to escape its isolation. After escaping their enclosed world, Ion and Earthes learn that the world shared between human and Sharl, another race existing in their world, is a dangerous one, with a relationship that must somehow be mended in order to create peace.

While the premise sounds very stereotypical of science fiction, Ar nosurge‘s story does take a lot of interesting twists and turns to keep the player guessing. The game is populated by strong, quirky characters, each with their own ideologies about the changes within the two worlds and beyond. The political intrigue is definitely one of the game’s highlights, and the constant connections the game creates between itself and Ar tonelico are quite fascinating for those who are fans of the series. Also being able to zap between the stories to see the alternate perspective at any time is well done, allowing for a more integrated experience, and the game is pretty good at reminding one what their next objective is regardless of which narrative is being played. Even the game’s endings offer a lot of exciting ideas and conclusions to the story, and there are a few of them to find. Gust took a lot of care in crafting the world, its characters and the story, but there are a few issues.

For starters, Ar nosurge‘s story relies heavily on Ciel noSurge, a social game that only released in Japan. Since this game was not localized, there are aspects of the plot that come across as though the player should know what is going on or have some background to previous events that have taken place in this world. The only way to get this knowledge is either to have played Ciel noSurge in Japanese or to read a very lengthy summary. Those who jump into Ar nosurge with no knowledge of Ciel noSurge will feel lost and disconnected to the story, especially in regards to the plot surrounding Ciel noSurge‘s heroine, Ion. 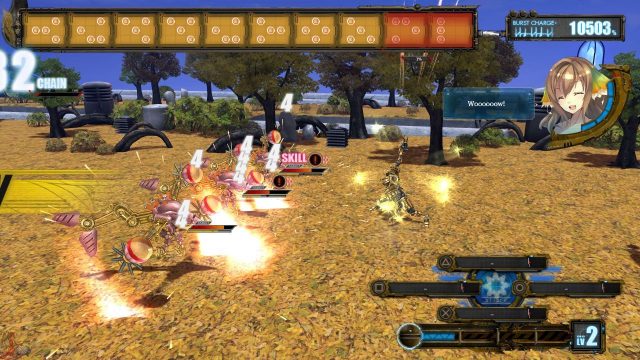 The second issue comes from the fact that Ar nosurge has a very poor localization. This game is incredibly text heavy and could have benefitted from some extensive proofreading. Many of the characters do not have consistent spellings for their names, place names also have a variety of spellings, a lot of the text is incorrectly formatted in the text boxes, and even much of the extensive terminology has so many different alternate spellings that it makes for a confusing experience. Moreover, the English voice cast is constantly referring to characters by different names. For example, one of the main villains, Zill, is constantly referred to as “Jill” by the voice actors and in the game’s text. There’s a huge lack of consistency, making for a messy read and putting a huge damper on an otherwise interesting world.

Another area that started off promising is the game’s combat system. Only two characters can participate in battle, either Delta and Cass or Ion and Earthes. Regardless of which two person team players use, combat is the same: the heroine selects a song to charge throughout combat, while the hero’s abilities are mapped to the face buttons and can be used until their turn is completed. Using the start button, the hero can also summon a Friend Skill to help defeat enemies, use items, run from battle or have the heroine use her Song Magic.

The twist in this battle system comes from the fact that the enemies come in waves. Before combat begins, the encounter meter in the top left corner tells the player how many waves must be completed before an area is secure. When battle is initiated, players can go through as many of the waves to their heart’s content, stopping the wave at anytime by using Song Magic to complete the battle. However, the game does encourage players to try and complete the encounter in full so that there are no more random encounters within the area being explored. The better the rank after completing a battle, the more dive points and money the player acquires, though this decreases based on the number of waves completed. This battle system starts out well, but fizzles once enemy waves move up to thirty plus. At that point battles become a long and boring slog. For the most part the battle system is quick, and those familiar with the Ar tonelico series will have zero trouble picking up Ar nosurge‘s combat system, but the larger waves do feel more like paddling than an actual challenge. Battles are also surprisingly easy on Normal, though the difficulty can be adjusted any time. 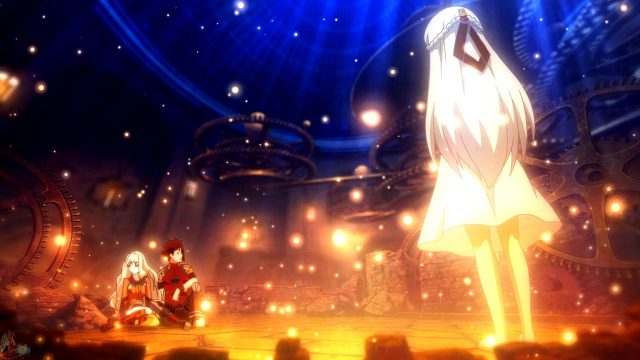 One area where Ar nosurge completely shines is its soundtrack. Every song sets the tone for a scene or encompasses a particular feeling or mood based on how the story is progressing. There’s also a surprising number of poppy tracks, prominently featured during item synthesis, which are wonderfully catchy and quirky. This is easily one of the best soundtracks that Gust has produced as each track encompasses the plot events strongly. Sadly, the English voice acting is somewhat of a mixed bag. It’s not horrible, but it doesn’t do a lot to stand out either. Those who are not interested in the English voice work can switch to the Japanese language track in the options menu. Gust has also stepped up its game in terms of graphical quality in its PlayStation 3 titles, which have been noticeably better since Atelier Totori. Ar nosurge is mostly pleasant to the eye, though there is some clipping and texture pop-in that can be somewhat distracting. Outside of these issues, the game’s graphics are quite vibrant and atmospheric, doing a good job of showcasing the kind of world illustrated within the story.

Ar nosurge is a game that can be completed in around thirty hours. The Genometics system, which is similar to diving in Ar tonelico, allows players to experience a visual novel, while also gaining insight to the various ladies in Ar nosurge. Completing each phase of the Genometic provides the heroines with new Song Magic for combat. These sections are crazy and mostly entertaining, though they definitely require a lot more thinking on the player’s part to complete them. There is also an item synthesis system and it’s the only way to create equipment for the hero and heroine. There is also a Purification system that allows party members to chat in a hot spring, as well as equip gems that are found through conversations that have occurred either throughout the story or during Genometics. All of these systems are fairly straight forward and don’t feel as though they are padded onto the overall package.

Ar nosurge is an interesting game that suffers from a lack of tender love and care on the localizer’s part. There are tons of great ideas on the developer’s side, but the localization is really what soils a lot of the experience in this game. Furthermore, while the world and story are fascinating, it relies too heavily on a game that North American and European RPGamers do not have access to in English, meaning there’s a lot of extra leg work on their part to work towards understanding Ar nosurge‘s story in its full context. Ar nosurge is a game that made me wish it had received more attention from its localization team, but sadly it didn’t.