Episodic RPGs have become the rage these days, especially in the RPG Maker realm. In a perfect scenario, an episodic game should be able to bring the player back into the world without confusing them. Alpha Kimori: Episode 2 is a great example of how to transport a player back in without force-feeding too much of the previous story.

Alpha Kimori: Episode 2 picks up immediately where the first game leaves off. After witnessing the political upheaval in Bidari, the protagonists — Rick, Vanessa, Evlar, and Princess Yuki — awaken to their true potential as Kimorians, humans who have been enhanced by Ki crystals. It is up to them to change the political relations between Bidari and its rival Jinri, two nations which seem bent on mutual annihilation.

The story and its world building are well done and strong. The world is fully fleshed out and the conflict feels intriguing and worth the effort to follow. There’s a lot of interesting dialogue, and the character conversations are colourful and entertaining. The plot does have moments where it feels rushed and difficult to digest, but even so the story is coherent, charming, and certainly building to something grander for Episode 3.

Alpha Kimori has a traditional structure that will not be new to JRPG fans. Its gameplay has players roaming through a wide variety of maps, engaging in combat, and fighting through the darkness of the world’s major conflicts. Combatants can use their Ki powers in combat to obliterate enemies, or use their physical attacks for massive damage. The battles are a straightforward turn-based affair with few bells or whistles, but it’s functional and gets the job done. The flashy special attacks are an excellent change of pace within the combat, though it would be nice to have the option to turn them off and make the battles go by more quickly. One of the largest complaints from the previous episode was its lack of an escape feature. This, thankfully, has been addressed, and players are now allowed to chicken out of battle when necessary. 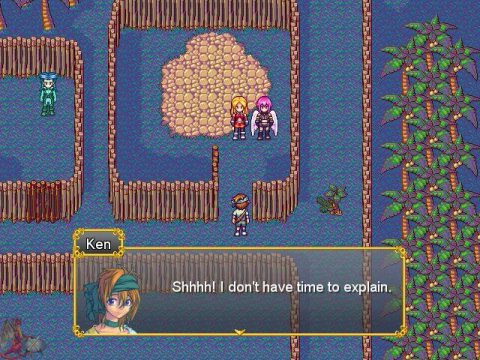 One thing that does get a bit irritating is the fact that on map screens visible enemies will gang up on our heroes, making it impossible to avoid combat. The number of visible enemies makes it difficult to traverse through areas and keep one’s health replenished. It also doesn’t help that the difficulty is a bit unbalanced at times, which can throw the pacing off. In fact, the ratio of plot to exploration is somewhat lopsided and creates progression that is sluggish, something that did not exist in the previous installment.

Another item of contention is how puzzles are handled in Episode 2. All the puzzles follow a block pushing formula that does not feel as tightly woven as it could be. While the puzzles are good, a bit of variety would have been welcome, especially considering how sloppy and repetitious the block pushing felt in the dungeons. It also was not fun to have to try and do a block pushing puzzle while also fending off hordes of enemies simultaneously. A better balance in terms of puzzles and enemies in Episode 3 would be greatly appreciated. 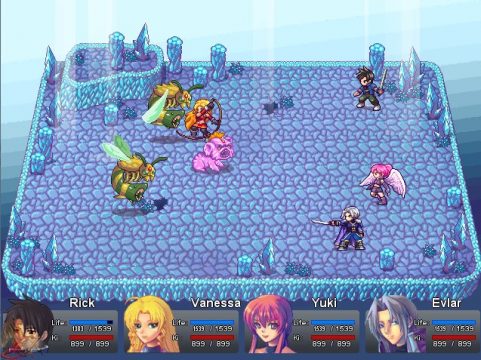 We must fight the… bees?

Graphically, Alpha Kimori continues to be a high quality RPG Maker title. Its graphics are crisp and clean with strong attention to detail. The sprite work is stunning to look at and definitely adds to the overall feeling of a love-letter to the 16-bit era of video games. The maps are wonderfully designed and, aside from the puzzles, are fairly easy to navigate without any graphical clipping whatsoever. The graphics of Episode 2 have a lot more charm and elegance than the previous episode, making this a wonderful improvement.

In terms of music, everything is relatively the same as the previous installment, with its inspirations being drawn from games like Phantasy Star II. It’s competent, but not particularly memorable, while the sound effects are a bit more grating to the ears. Still, the music is mostly well done, but more variety in terms of sound effects would be appreciated in Episode 3.

After my ten hours with Alpha Kimori, I can definitely say I’m interested to see what Sherman3D will provide in the next installment. This series has a lot to like for those who are story-driven RPG fans, and the characters have enough charm to keep the sluggish exploration moving. It’s not a perfect experience, but it’s one that is showing constant improvement. I can only hope that Episode 3 provides a satisfying conclusion to this emotionally charged trilogy.