Average Is as Average Does

Alpha Kimori: Episode One: Great Doubt is the first title from independent developer Sherman3D, and is a valiant first effort at RPG development. It is not a game without faults, but for a first title it is fairly impressive, especially considering it was made with RPGMaker XP. It opens with a fairly interesting premise, but it should be mentioned that the player’s enjoyment will hinge on how much they can tolerate anime-style plots. Players that don’t like anime may find Alpha Kimori‘s story to not be their cup of tea, but for those that do enjoy anime Alpha Kimori offers a unique setting among RPGs.

Alpha Kimori‘s story opens up with an alien invasion of Earth. It is during the invasion that God appears as a giant space ship with seven giant angel robots called RICA (Robotic Intelligent Cybernetic Armor). The God space ship whisks humanity to their new home on the planet of Alpha Kimori. After arriving in their new home, humanity splits into two groups: the Bidari, who intend to take back the Earth using RICA technology, and the Jinri who see their new home as the promised land and refuse to allow it to be taken from them. The conflict arises because the Jinrians have special crystals that the Bidarians need to create special warriors called Kimorians. Kimorians are the only ones that can pilot the RICAs. Rick, the protagonist, is a Kimorian, and the son of the High General and the Admiral of the Bidarian army. Although great things are expected of him, Rick ends up falling for the Princess of the Jinrians, and this is where his adventure begins. One problem with the story is that it’s really short, about six hours long, but it leaves the player wanting more. 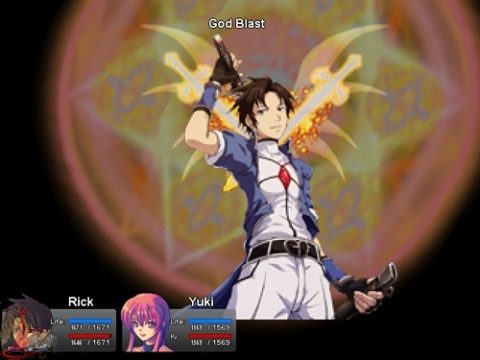 Combat in Alpha Kimori is very much a typical turn-based affair. The game utilizes the standard array of battle options: attack, defend, magic, and items. Magic in Alpha Kimori is known as Ki, ranging from standard attack and healing spells to character specific skills called Ki Arts. There are a few battles where the Kimorian characters get to pilot RICAs, but there is no difference between those and normal battles. Since there are no random encounters in Alpha Kimori, players can choose between fighting or avoiding the enemies on screen. However, it is inadvisable to skip encounters as players will need experience points and certain areas make it virtually impossible to avoid encounters due to narrow corridors.

As mentioned previously, Alpha Kimori is a short experience, ranging between five to six hours on an average playthrough. If the player fights the battles regularly, then the difficulty stays fairly moderate. This is one of those games that if the player tries to skip avoidable battles then it can ramp up the difficulty considerably. That being said, it isn’t necessary to level grind in Alpha Kimori. 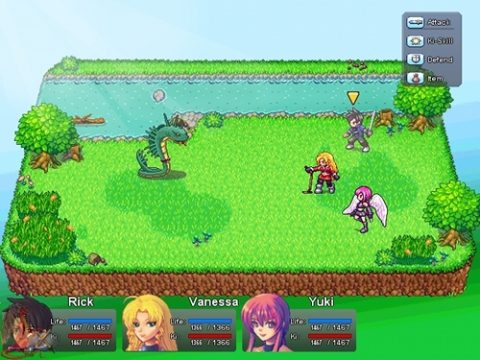 The interface of Alpha Kimori is very clean and easy to navigate as players can navigate the world and menus using either the WASD, the arrow keys, or the mouse. There was one crash bug that was encountered during the review playthrough, but the issue has since been patched. The game includes a quest guide that can be used to keep the player up to date on the story, and while it is a nice feature it is ultimately unnecessary given the game’s length. The interface is ultimately clean and effective, but not outwardly outstanding either.

The music of Alpha Kimori is certainly a highlight of the game, particularly the main theme sung by the Hatsune Miku Vocaloid. The music has a great styling to it and is fitting overall. The visuals don’t strike quite of high as a cord as the music, but considering the game engine it was made with, the graphics are more than serviceable to the task. While the in-game visuals are quite poor, the quality of the anime art, in particular the character portraits, is quite the visual treat.

In the grand scheme of things, Alpha Kimori is neither a good nor a bad game. It falls into the realm of the decidedly average titles, where it fails to impress, but is not overly flawed in any major way. All in all, if the player thinks that they are going to enjoy the story then pick it up, but don’t approach it with overly high expectations.