The Three As Stand for “Ass, Ass, Ass”

Ever played an Asian MMORPG? Wait, scratch that — ever played any MMORPG at all? A3 will show those who answered in the affirmative nothing they haven’t seen before.

The whole game is a collection of borrowed concepts and recycled ideas. Not just that, but it borrows bad concepts and uses extra-poor implementation of recycled ideas. It’s a pretty sad day for a development studio when it steals gameplay ideas and actually ends up making them worse than they’ve ever been. The first and most obvious example comes with combat. Leaving one’s home city in A3 will stick the character right in the path of aggressive monsters. There’s no problem with this at first; the first few level-ups in an MMORPG always come with repetition and killing lots and lots of the same few monsters. But then one notices that A3‘s combat doesn’t improve or drastically change as levels increase. Whereas most games introduce impressive and useful new skills that breed new combat techniques as the character grows, A3 avoids such practices. More powerful slashes and stronger magic spells can be learned, but not much more variety busts onto the scene after about 15 levels.

Then the player will notice something else; A3 is one heck of a level grind. That’s basically all there is to the game. Furthermore, leveling becomes a ridiculous chore after about level 12. It’s sad when someone trudges through upwards of 150 hours in a game, somehow convincing oneself that surely there is light at the end of the tunnel, only to find that a game’s best non-battle content is betting on dog races and playing the lottery. What a sorry excuse for content. Surely an MMORPG whose developers parade it as being “a drama MMO” and “heavy on story and themes” could find some amazingly deep, story-driven quests, right? Right!? …Please? Apparently not. 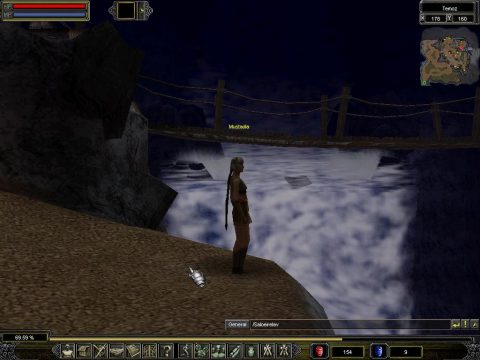 Fun to explore…for the first little while, anyway

In A3‘s defense, Korean/Malaysian/Singaporean MMORPGs aren’t exactly known for their vast amounts of content, but when — as previously griped about — story and themes are supposed to knock the socks off players, finding such a standard tale with a story one can almost entirely avoid is a crushing disappointment. Said story is based on the detailed myth of the great tree “Silbard,” which supports not only the six continents of the world, but the sun, moon, and stars as well. On the second continent, called “Hellamarsh,” humankind lived in peace with several other species, but the tranquility didn’t last forever. A new clan led by a woman calling herself “The All-Mother Rabellu” took over and created many new laws. One of those laws forbade the “mixing” of races, essentially outlawing inter-species marriage. Halfling children would be considered “demons,” and anyone caught breaking the taboo would bring on severe consequences. Taking that law and various other rules imposed by the new clan as tyrannical, a group of legendary fighters formed the first “Knight’s Circle” to combat them, sparking a continent-wide war. After long years of fighting, the knights lost. Humanity was exiled from the continent, and faeriekind was sealed away. 200 years after the end of that war, strangers calling themselves “Normans” started washing up on the shores, looking to build their own kingdoms. These warriors have no idea how they ended up here. Players take the part of the Normans, following in the footsteps of the legendary Knight’s Circle with the goal of creating and ruling their own countries.

This sounds fairly promising when reading it. But oh, the sharp pangs of disappointment that come when the players try to dig deeper into the tale, only to find that they already know the greater chunk of it. The quests are just like any other MMORPG, only without any real purpose or…(what was that other thing?) …oh yeah, fun. Comfortable being an errand-runner all day? If so, play A3. For those curious, here’s a list of games that use the fetch-quest-and-level-grind system better than A3: 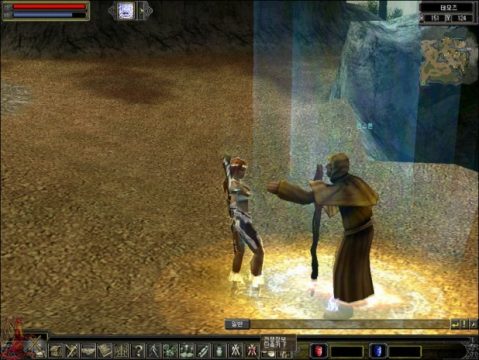 Some of those “mature themes” in action

Most destructive to A3 is its interface. A3 isn’t very newbie-friendly at all. May the gods help those who stumble into this as their first MMORPG, because it could potentially stain their impression of the genre — a genre those players might otherwise become enthralled with if starting with something like Dark Age of Camelot or City of Heroes. Here’s the major killer, though: point and click movement in a fully 3D world. Add that in with the fact that camera movement is manual, and the simple task of walking around town is a dreadful chore. One must be constantly clicking the character’s next destination, all the while using his or her other hand to rotate the camera and see where the character is walking. It’s a sloppy, stupid, annoying process, and this is just in a town, where there is no threat of being attacked by a monster. Get out into the battlefield and hoooo, boy. A character will be fighting something, then a new monster will appear exactly in the spot of his or her last kill, which was finished just five seconds ago, leading to a gang beaten one can’t escape from. Fields are horrendously overpopulated with monsters that respawn entirely too fast. Now, with that in mind, picture someone trying to use the clunky point-and-click movement while being attacked by multiple monsters. It’s painful enough to imagine, and even worse when a character dies due to A3‘s wretched movement. 2D games can get away with this, and even some 3D games can make it work if they have automatic cameras, but there’s nothing remotely user-friendly about A3. The whole game just feels incomplete.

All of this is so sad because A3 really did have some potential going for it. The graphics, for example, fall short of average expectations for a 3D MMORPG, but with some polish, they could be pretty impressive. As it stands, however, there is nothing visual to distinguish A3 from any other Asian MMO, save for maybe the borderline pornographic wallpapers. Music, on the other hand, is clearly the game’s highlight. The only feature A3 can claim it has “one of the best” of is its soundtrack. The tracks aren’t so high in number as one might like, but there are enough in the game to satisfy, and the quality thereof is quite impressive.

At the end of the A3 experience, one feels a loss of self respect and a pining for the time he or she unfortunately lost to this wretched game. For those wanting to get into MMORPGs, or have recently quit one and want to pick up another, this reviewer can only point to this list of MMORPGs that are superior to A3: