Demonschool looks to hook players with a story that connects characters together in a weird and ever shifting landscape.  The game’s unique and detailed use of 2D and 3D visuals to bring to life the context of the story is amazing to behold.

Necrosoft Games’ Demonschool sees the developers taking various forms of nostalgia to create a unique world in which to tell an intriguing story.  Demons are invading the human world and how these worlds interact by splicing 2D and 3D visuals is a great sight to behold.  RPGamer got a chance to check out a demo of this approachable game, which gives tactical grid-based gameplay a revamp with combat strategy focusing heavily on movement as opposed to stats.

Demons have waited until they became myths in the human world to strike, starting with a mysterious island.  They are cunning and intelligent, believing humanity to be easily manipulated like cattle.  To start with, the demons are causing the island’s inhabitants lose memories beyond the previous day.  Demons use this confusion to prey upon people, while others are turned into near mindless thralls that are able to complete mundane tasks.  Unfortunately for the demons, intrepid demon hunter Faye is compelled to come to the island as a transfer student after finding a prophecy foreseeing the demons’ return.  Faye has textbook knowledge of the situation and gathers together a group of other individuals that found themselves drawn to the island with no idea why. 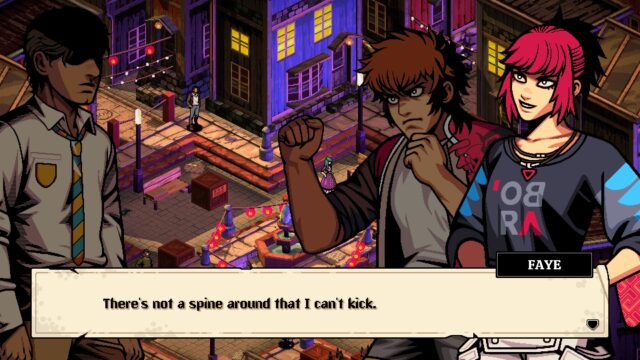 Faye is a feisty one.

The team meets up through their high school classes, which gives Faye time to build bonds with everyone and accomplish sidequests outside of class.  These sidequests enrich the world and some build bonds with the party members, which can factor into the story’s endings.  Days advance through morning, afternoon, and night, and there are easy-to-follow markers showing where to go for sidequests or to advance the main plot.  Party members easily stand out during conversations with their personality quirks, making dialogue cheesy and fun.  The party has its own HQ in a clubhouse, which players can refurbish with some cosmetic options, though it ultimately functions just the same as other locations.

Demonschool uses its visuals as a representation of the demons’ self-assured superiority over humanity, while underestimating their capabilities.  Demons are portrayed as more advanced, powerful, and from a realm foreign to humanity, which is showcased by portals to a 3D world.  The human world, by virtue of being more plain and straightforward in comparison is rendered in 2D, with demons sending altered 2D minions to subjugate humanity.  One particular boss battle highlights the blend of 2D and 3D beautifully, with the 2D world breaking apart for a 3D skeleton to pull itself out of the demon world and place its 2D grunts to invade the world should they get past the party. 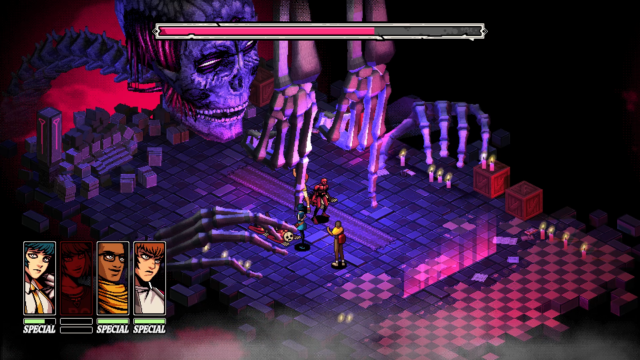 The skeleton’s hands and head animate so well as backdrops to the 2D environment.

Battlefields are all tightly knit grids that offer a limited amount of space for players and enemies to work with.  This places an emphasis on strategically placing characters.  The demo features four party members — Faye, Destin, Namako, and Knute — with the party having a shared Action Point (AP) pool, with each subsequent action by the same character using more AP each time.  With health pools for each character at three, there’s little margin for error.  This is balanced by allowing players to plot out the entire round before executing it, finding the best ways to utilize everyone’s abilities.  Characters are able to freely side-step, but any other movement requires AP.  Flanking enemies allows for combos to deal extra damage, while party members can manipulate enemy positioning with their attacks, adding to the strategic options.

Combat takes a moment to get used to, but quickly becomes a breeze, making fights short and sweet.  Finding the best ways to maximize each round to deal the most damage is addicting enough on its own, but debuffs and buffs add new layers.  Namako’s stun lowers defence, while Knute’s can grant an extra point of strength if he heals an ally at full health, combining to allow Faye or Destin to deal three or four damage with each strike, a massive boon when attacks generally hit for a single point of damage.  Poisonous effects can add up fast with such a limited health pool, adding up quickly to put pressure on players to pay attention to their surroundings.

Characters will also receive techniques that can modify skills and work as a replacement for armour.  The total playable cast is planned to reach fifteen, each with their own skills and backstories, giving a lot of variety to play with.  Combat is meant to be breezy and not punishing, giving players a choice to skip, retry, or quit after a party wipe.  Optional combat stages are available to grind for additional loot to increase stats on character’s skill trees, but aren’t necessary as smart strategy can succeed in any fight. 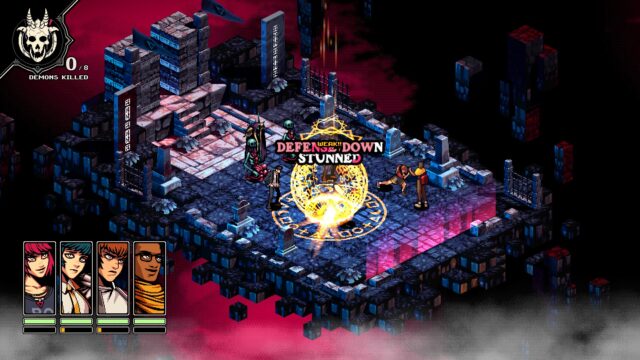 A particularly flashy and impressive end of a round to take down a few enemies.

Demonschool features an interesting variety of inspirations, starting with the visual flair of 70s Italian horror films and an accompanying musical style.  The demons themselves are influenced by Japanese horror manga for a variety of unsettling enemies.  The overarching theme is one of friendship prevailing through tough situations, with things feeling more spooky and weird rather than horrific.  There’s a sense of situational comedy with NPCs wandering in a daze unfazed by the mounting craziness around them.  The portrayal of its magical and fantastical elements successfully makes the world feel like one that is normal to its characters, but provides something new and unexpected laying around every corner for the player.

Demonschool looks to hook players with a story that connects characters together in a weird and ever shifting landscape.  The game’s unique and detailed use of 2D and 3D visuals to bring to life the context of the story is amazing to behold. Meanwhile, its movement-based combat system gives players plenty to tinker with as it evolves.  With plenty of nostalgic inspirations, all that’s left to see is how its ideas come together into a final product, but the demo indicates that it’s shaping up to be a great experience.

Disclosure: This article is based on a demo build of the game provided by the publisher.