The Nintendo Switch is completely capable of keeping Persona 5 Royal running well, displaying everything in its amazing clarity at full speed.

Persona 5 first released in the west early on in 2017, with its enhanced Royal version hitting a few years later. Through the years, I purchased both for my PlayStation 4, but only played a few hours of the original, and never even opened Royal.  There was always some other game that I was equally excited to play on a more portable system, which kept me from sitting down to the lengthy adventure I knew awaited. Thankfully, Atlus has brought Persona 5 Royal to the Nintendo Switch, plus other platforms, and I’m loving how deeply I’ve been able to dive into the game at last.

Persona 5 Royal sees players take on the role of a high school boy, who after getting in trouble with the law is sent to live in Tokyo and attend Shujin Academy. As such, players immerse themselves in the daily lives of a high schooler with a supernatural twist. Most days are spent making friends with others that aren’t exactly the most popular kids, working odd jobs, and generally exploring the Shibuya ward of Tokyo. The Persona twist is that these high school students also can run in a ethereal cognitive metaverse as a group of Phantom Thieves, influencing the hearts of those of those that have done evil deeds onto others. 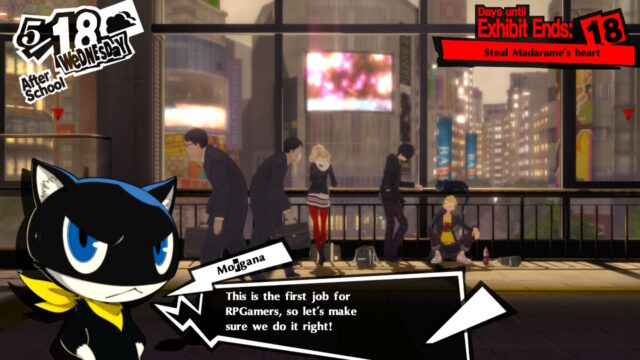 Shibuya is a vibrant setting for Persona 5 Royal.

The narrative is a compelling one, dealing with multiple heavy topics such as abuse in personal relationships and mental health issues, to larger-scale issues such as fraud, blackmail, and drug dealing. The issues are handled tactfully and the emotions they evoke in the cast are wonderfully portrayed by an excellent voice cast. Not only are the main characters done well, players will hear the hurt, joy, anger, or defeat in the spoken tones of each NPC victim or perpetrator. With such a story-heavy game that promises to stretch to a hundred-hour experience, it’s incredibly convenient to be able to hit the suspend button on the Switch at any time and take a break without having to worry about finishing a lengthy story segment or reaching a save point.

While the premise of high school students saving others/saving the world will feel familiar from earlier Persona games, the dungeon mechanic differs from recent previous titles. While Persona 3 and 4 had randomly generated dungeons, Persona 5 switches to intricately designed dungeons, called Palaces, and they’re amazing to explore, both from excellent gameplay mechanics and visually. The entire graphics style of the game seems reminiscent of graphic novels, comics, or manga and the bright color schemes make everything pop beautifully on screen. The Nintendo Switch is completely capable of keeping Persona 5 Royal running well, displaying everything in its amazing clarity at full speed. 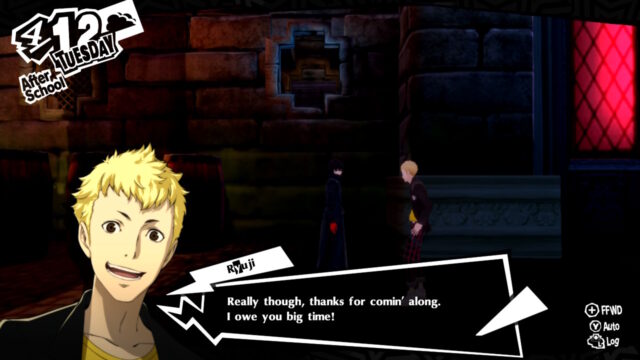 Nintendo fans have clamored for this title for years, and now it’s here.

Speaking of full speed, the zippiness of the battle system in Persona 5 is a breath of fresh air compared to the slog that a lot of turn-based RPGs suffer from. The action-packed battle themes provide a nice audible accompaniment to a system where most commands are mapped to a single button rather than stuck half a dozen button presses deep in a menu. With gun and melee weapons available for each character, combination attacks, eight different elements to attack with, status effects, and so forth, its take on the Shin Megami Tensei press turn battle system has plenty of options for any veteran strategist to tinker with, yet with the adjustable difficulty, can remain accessible to players of all skill levels. Much like the aforementioned battle themes, the rest of the soundtrack to Royal is exceptionally done well, with serious plot events seeming even more so because of the background music, and more light humor moments appropriately accompanied by a less serious score.

Persona 5 Royal on Switch is a long-awaited port, and can now stand proudly next to it’s action sequel, Persona 5 Strikers, on the system. In more than 40 hours of gameplay so far, not a slowdown nor crash were experienced, both on the Switch Lite and the original Switch, docked and undocked. More details on the complete experience are readily available through past Game of the Year awards and earlier reviews at RPGamer, but it’s pleasing to report that Nintendo fans can finally sink their teeth into this spectacular title with all of its bells and whistles on full display.