Inkulinati‘s combat is deep yet full of cheap tactics.  With a unique visual flair with photographic hand animations and quill written play-by-play commentary, there’s a lot that catches the eye and makes it water from laughter.

In a world filled with roguelite tactical games, there’s something needed to make a new release stand out.  Yaza Games’ Inkulinati takes a unique visual style that combines photographic animated hands that draw on the page with inked sketches based on Middle Age manuscripts, and it adds humor and a deep combat system.  In this demo, RPGamer takes a look at how the combat system compliments the unique visual style.

Inkulinati features various members of intellectual sects of the Middle Ages who form the titular group to wage battles with one another, using these ink based contests of strength and will to fill manuscripts to be recorded for the ages.  Players have a cosmetic choice between an alewife, a miller, and a loony relative of the master to choose as their avatar.  This avatar then gets a tutorial guide and needs to go through nodes on a map filled with story, combat, treasure, and shop icons to finish the tutorial.  To celebrate the completion of the tutorial, the master hosts a party and invites Death, who ends their life.  Death continues to party and tells the avatar that they need to gain experience to try and challenge them to revive their fallen master.  Attempting to hinder their quest are other members of the Inkulinati who don’t want the master to return, with the demo ending on a fight against the knight Sir Godfrey.  This is a story that is definitely tongue-in-cheek with many comedic moments. 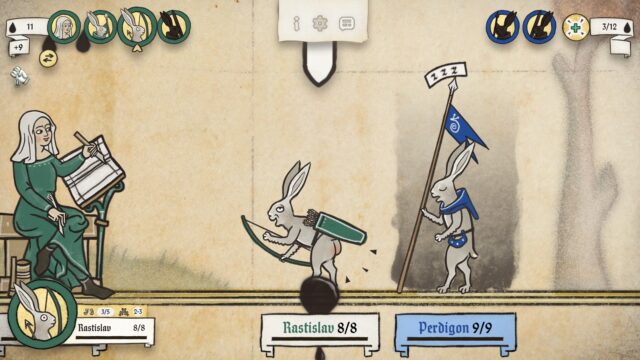 “I fart in your general direction. Your mother was a hamster, and your father smelt of elderberries.”

Players begin their journey with three beasts, three hand actions, and a talent.  Players can use living ink to create beasts on the battlefield, with more available by standing on ink blot squares to obtain more for use next turn.  Hand actions are abilities the avatar can use to reposition things on the battlefield, as well as healing or doing extra damage.  Talents are passive abilities that increase effects of hand actions.  Additional beasts and hand actions can be purchased from shops that are found along the journey.

Beasts are chosen from a variety of different animal races, including cats, dogs, rabbits, goats, and foxes.  Dogs, rabbits and foxes each have a sword, bow, or spear that functions slightly different from the others.  Dogs are sturdier then the other animals, while foxes can steal living ink during attacks, and rabbits cause debuffs through flatulence.  Goats use trumpets to cause debuffs from a distance, while cats are able to heal but also deal more damage if attacked first.  Cats are pious beings, so when they are attacked, enemies gain the debuff heresy, which has them take more damage from the holy felines. 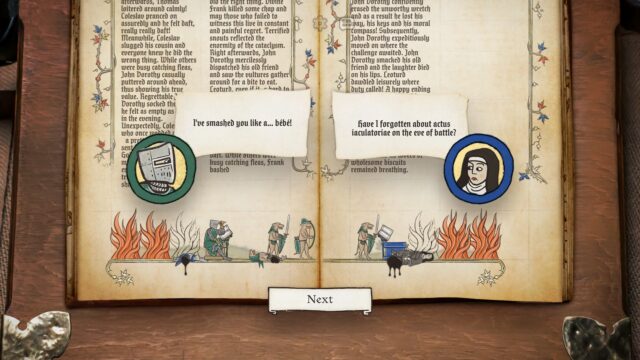 Just some of the amusing play-by-play commentary.

There are two forms of combat showcased: one is a simple five-on-five beast combat, while the other pits avatars with hand actions against one another.  Avatar combats temporarily raise the ink costs as a way to have players try out different characters, while beast combats serve as exhibitions to see how various combinations of ally work out.  Fights take place on book pages, with obstacles, ladders, walls, explosive barrels, or infectious poisonous clouds dotting the field, and vary from close quarters to massive arenas.  There is a turn limit to combat as an apocalyptic fire appears at the edge of the map every few turns, in which everything caught in it automatically perishes.  All combatants have the ability to push one square, which if there’s not an empty space to save them, can slide recipients off a ledge or into apocalyptic fire making them perish.  The only way to prevent being pushed it to pray, which otherwise just gives a temporary boost to stats and ends the turn.  This ability allows even the weakest unit the chance to outwit the strongest enemy.

Dealing damage in Inkulinati has a degree of chance to it.  Attacks by beasts have a gauge that moves up and down and has to be timed to hit the highest totals or else one is chosen at random after a few seconds.  Obstacles also dot the path such as ladders and explosive barrels, these can be used strategically allowing for beasts to create explosions, attack from afar, or use spears to strike from any angle two spaces away.  However, it was much easier to just outwit the enemy and push them to their doom.  The game embraces this as head on fights rarely succeed, meaning some form of guile is needed to carry on. Players are given freedom to experiment as, despite being a roguelite, there are three chances to restart fights that are lost by using quills. 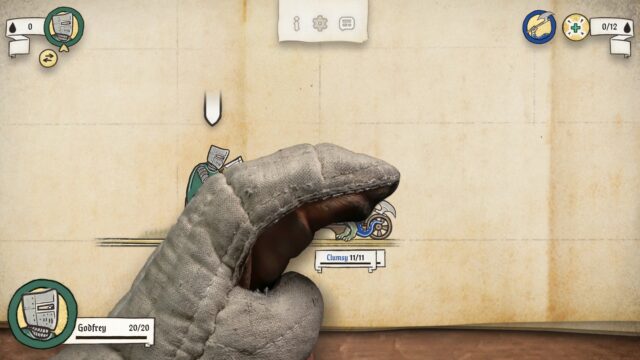 Sir Godfrey lending his helpful hand during the tutorial.

Inkulinati shines when showcasing it’s visual flair by fusing photographic hand movements with a uniquely drawn motif.  Accompanying this is a quill drawn play-by-play that details each turn the combatants make to keep a history of moves.  These play-by-plays are humorous by providing inane humorous commentary to poke fun at the combatants.  These moments add enjoyable levity to an otherwise serious combat system.  Sound effects and music fit the medieval tone but don’t add much to the proceedings and easily gets lost in the visuals.

Inkulinati‘s combat is deep yet full of cheap tactics.  With a unique visual flair with photographic hand animations and quill written play-by-play commentary, there’s a lot that catches the eye and makes it water from laughter.  The demo is a good start and something lighthearted to keep in mind when the game fully releases.