One Piece Odyssey Gets January Date 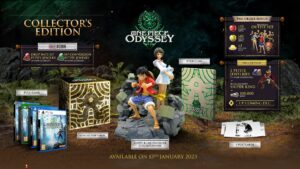 One Piece Odyssey helps mark the series’ 25th anniversary and will feature an original story supervised by series creator Eiichiro Oda. It sees the Straw Hats, led by Monkey D. Luffy, marooned and separated from each other on a mysterious island following a storm that destroys their ship, the Thousand Sunny. The game will feature nine playable characters — Luffy, Zoro, Nami, Usopp, Sanji, Chopper, Robin, Franky, and Brook — with the game voiced by its original Japanese anime voice cast.