Sigil of the Magi Demo Impression

Sigil of the Magi is here for one thing: to provide a different take on addictive card combat.

Deckbuilding RPGs are becoming more and more popular these days.  To be memorable, the game must be fun and have a unique twist.  Yongjustyong’s Sigil of the Magi has both of these aspects down as the card combat is addicting, with the twist that fights take place on a tactical grid.  This makes positioning just as important as the other aspects and throws an interesting wrinkle into gameplay. RPGamer takes a look at the Steam Next Fest demo to check out one of the game’s factions and two different maps through roughly an hour-long demo.

Sigil of the Magi is not a game built on story.  Players choose a team based on a faction and jump into a world map filled with nodes of monsters and bandits looking to upset the world’s harmony.  In the demo, players get access to a faction with the knight, archer, and wizard champions to use.  They advance node by node until they defeat the map’s boss and are transferred to another map to do everything again versus different enemy types.  The combat and addicting natural of card games is the draw to this game.

Sigil of the Magi has cards for each character in the party, and they can get new abilities by winning fights, obtaining positive effects during events, opening treasure chests, and purchasing cards from a merchant.  When combat begins, the game transitions to a tactical grid, with players able to place their champions within a designated area.  Players go first with enemy turns following.  At the beginning of the player’s turn, their mana pool refills to max and they draw cards, while enemy actions are pre-determined by the ability furthest left on their portrait that isn’t waiting for a cooldown.  This allows players to strategize based on knowing what enemies will do.  Further adding to this strategy is that players don’t have to use all their mana points on abilities used right away, they can bank up to four cards on a storage board for free use on later turns.  Players can create fun combos with cards from their hand and the storage board. 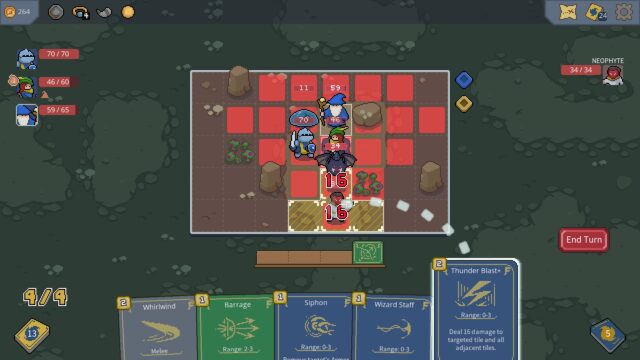 Cards will either do damage or provide armour.  Armour lasts one turn and mitigates incoming damage.  Cards can also have buffs or debuffs attached to them.  Buffs include power which raises the amount of damage the character does with an attack.  Debuffs include vulnerable, which raises the damage done to that character, weak lowers the effectiveness of that character’s cards, and some maps have poison tiles if moved through.  Enemies target players with the lowest health making them predictable with additional difficulty coming from frustrating passives.  Some enemies duplicate, lowering health but providing more targets to take damage from.  Another enemy ability is soul bind, where all enemies must be downed within a three turn limit or else will revive with half health.  Little intricacies like this add to the layers of strategy found in the game.

Relics add complexity to the combat.  These are obtained from treasure chests or can be bought, and they add wrinkles to combat like cards that are played from storage are stronger.  More complex cards include bonuses such as gaining a power if four cards are played by one champion.  These relics can also stack causing that champion to deal massive amounts of damage if chained correctly. Players can also get wound and junk cards that clutter up their deck.  In the demo there’s a few times where really outlandish thinking pays off.  For example, one character was hit with weak so much their attacks dealt negative damage, which added armour to the friendly target that was hit.  An event later on asked for a toll, instead of sacrificing health or gold, a wound card was chosen as payment.  These innovative examples just add to the variety and strategy in the game. 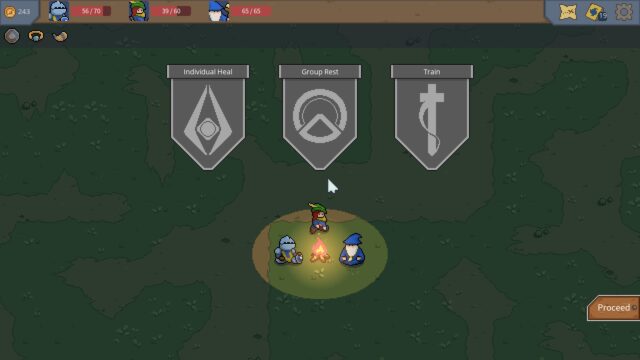 Rest points on the map are the best way to regain health to champions.

This variation is set to only grow as Sigil of the Magi will have more factions and champions to offer in a full release.  The demo provides a lot of variety in enemies, with the full release set to have even more, including options to increase strength and abilities to existing ones.  All of this variety looks to ensure each playthrough will be different, which extends even to the demo.

With such a large focus on gameplay, the visuals and sounds of Sigil of the Magi feel secondary.  The exception to this is the detail in the simplistic sprites that feel nostalgic to the early days of gaming.  These sprites have a lot of detail to them making every one feel distinct.  This does not extend to the world as the map is just plain with a bunch of nodes following a legend to distinguish their characteristics.  The music is serviceable but is easily forgettable with sound effects in the demo being little more than dull thuds.

Sigil of the Magi is here for one thing: to provide a different take on addictive card combat.  It succeeds by adding a tactical grid as well as the option to use cards to a storage box for future turns, which provides a lot of variety in how combat plays out.  In the demo all the effort has gone into the gameplay though making much of the aesthetics suffer.  The detail added to the charming retro sprites provides a good sign though.  If the demo is any indication, the full game will be more addictive as more options become available making it a game to dive into time and time again.