Idea Factory International released a new trailer for Neptunia x Senran Kagura: Ninja Wars ahead of its release next week. The 80-second gameplay trailer is joined by new details and screenshots focusing on the game’s Peaches & Cream Meditation system and introductions to four more characters.

Peaches & Cream Meditation is a mini-game that sees players attempting to balance on a giant swaying peach. During the meditation, players might be given a Patience Challenge. Mindful Peach tasks players with trying to keep their character within a frame a light, while Clarity Peach removes the balance gauge for a period of time. If players succeed in the mini-game, which comes in three difficulty levels, they will gain a temporary stat boost. 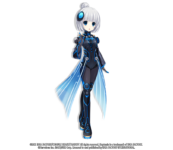 The four characters introduced are new to Neptunia x Senran Kagura: Ninja Wars. Yuuki is from Virtue Nation and serves Princess Aaru, being her companion since childhood. She is usually calm but can lose her cool with things regarding the princess. Goh the Crow is a mysterious ninja suffering from amnesia. She unhesitatingly attacks any other strong ninjas that she sees. Yoh Gamer is from Steeme Legion and boosts being the strongest practitioner of her style. She is responsible for beginning the game’s conflict between the ninja nations. Finally, Tetsuko is a commander of the Steeme Legion but unlike Yoh she seems to dislike conflict.

Neptunia x Senran Kagura: Ninja Wars is a crossover spin-off between the Neptunia and Senran Kagura series. Neptunia x Senran Kagura: Ninja Wars takes place in the Game Ninja World, where two nations (featuring Neptunia’s Neptune, Noire, Blanc, and Vert and Senran Kagura’s Asuka, Homura, Yumi, and Miyabi) are battling through their respective ninja schools for dominance before the world is invaded by a machine army. The game will launch on PlayStation 4 in North America on October 26, 2021, with the European release following on October 29, 2021.