Wolfstride oozes graphical style, from the opening sequence of the game to every detailed character and combat scene.  With so many little details that fit together, it looks like stills from a high-end comic book.

Developer OTA IMON Studios and publisher Raw Fury have presented a noir turn-based mech fighter in Wolfstride.  RPGamer takes a look at the short demo that takes in two fights along with setting up those bouts by managing additional skills and equipment purchases, while showing how to repair the player’s Mech in between combats if necessary..  Wolfstride shows off a lot of stylized visuals with snappy musical accompaniment, but feels lacking in combat options.

In Wolfstride, players control Shade, a laid back mechanic and fight promoter.  Shade is in the business of making money from mech fights and happens to have one code-named Cowboy.  Shade is not alone, and along for the ride is a colourful cast of characters.  Knife Leopard, the pilot of Cowboy, wants to keep the unit to maintain his friend’s legacy, and uses this mysterious motivation to go into harm’s way to have Cowboy rise in the ranks.  Peepoo is a sarcastic robot that tosses insults Shade’s way while giving him information on the next fight and selling new skills for Cowboy to use. Z.Z. Zowie procures the group’s supplies and acts as shopkeeper.  Finally, the dog-man Duque is the group’s other mechanic and second-in-command that has a short temper and wants to sell Cowboy to make a brand new mech, yet still confirms each fight for Shade.  This motley crew of eccentrics make their way through the opposition, an equally extravagant pair of pilots in their mechs to claw their way to glory and riches.  The full game promises to have plenty of interactions with this crew as there is a full city to explore and money from mini-games earned towards the goal of winning the Ultimate Mech Tournament. 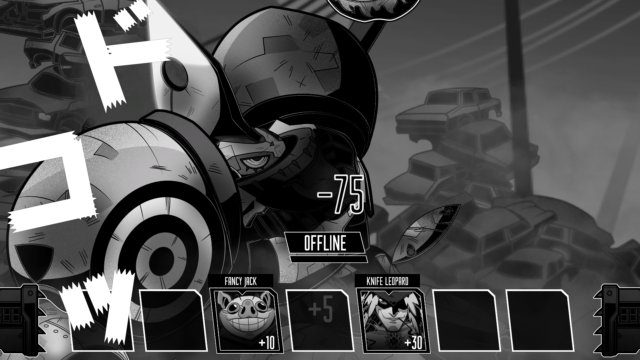 With a final punch, Fancy Jack was taken offline.

After all the style of the characters, the combat feels a bit lacking in the substance area.  Each combat boils down to a duel between two mechs that takes place on a linear seven-position grid map.  Like in a boxing match, combatants start the fight on each side, then when the bell rings, fists and bullets start flying.  How they start flying is up to the player character as it plays out in a turn-based fashion.  Each mech has four different attack, three defensive, and three restorative abilities that make up the entirety of combat.  Abilities take a set amount of action, ammo, or movement and occasionally comes with a cooldown.  These are doled out in points based on the equipment currently on Cowboy, and by default the mech has three of each action points, ammo and movement.  Offensive moves all have a range of tiles that the attack can be used in, and some attacks can have the ability to knock back the enemy, making movement a ducking and weaving motion to find the optimal positions for multiple strikes, continuing the boxing analogy.  Finding the most damaging combinations to keep Cowboy standing and the enemy reeling is fun for a time.  Without options for dodging or countering, fights require too much back and forth movement.

Strategy comes into play through the ability to target a mech’s head, left or right arm, or body.  The head needs to be active to recover action points, while the arms are needed for the majority of attacks, and without the body the pilot will not be safe and the battle ends.  Players might expect to enjoy strategic targeting among the mech’s four different parts, but with any being fair game, fights typically result in a race to take out the body.  This is done because when the body is offline, the battle ends, but if an arm is taken out, it can be revived or healed using skills.  There is some hope of variety though as the player has access to a skill that taunts the enemy into attacking one of Cowboy’s arms, and one of the opponents has the ability to pick up a pile of junk to use as a shield, making the trash-shield arm a target for a few turns.  That unique capability adds charm to the game’s style, because it is rare to see a pile of trash improvised as a shield. 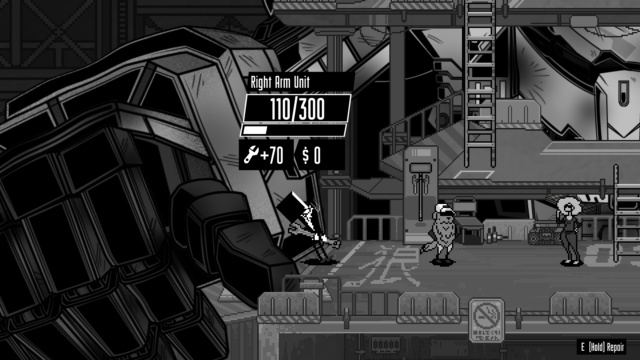 Look at that detail from Cowboy’s injured arm.

After combat spoils are earned, they can be used to purchase upgrades for Cowboy, skills for Knife to use while piloting or to repair Cowboy.  Repairing Cowboy is a treat as Shade runs around, climbing ladders to reach a battle-torn Cowboy to buff it out using hammers and wrenches, slowly making the giant robot look more like its good-as-new self.  This little touch to the visuals is welcome and makes Cowboy feel like a silent guardian and member of the team even though it is not sentient.  Purchased skills can add some more variety to repeat fights but they are held back by the restricted options in battle.

Wolfstride oozes graphical style, from the opening sequence of the game to every detailed character and combat scene.  With so many little details that fit together, it looks like stills from a high-end comic book.  These details all add up making everything distinct and memorable.  Moving around the map is a joy with the pixel versions of Shade and the other characters mixing with casual rock that occasionally adds whistling to make it a relaxing trip.  Combat music heightens the tensions with additional bass that adds weight to the fights, making them feel powerful as well.

Wolfstride has a lot of potential from its unique visual style and boxing fight mechanics.  The game leans too heavily into the simple side of fights.  This makes battles a chore to slog through until the next story beat and more of the game’s good soundtrack and styled visuals come into play.  Maybe some of the promised mini-games or the ventures into town will liven things up, but the experience so far is a lot of style with little substance.