Pokémon Brilliant Diamond and Shining Pearl are remakes of the fourth-generation titles Pokémon Diamond and Pearl, which were released for Nintendo DS in Japan in 2006 and in the west in 2007. Pokémon Legends: Arceus offers a new approach for the series, being set in the Sinnoh region’s past and featuring an open, full-3D world. The game sees players venturing out from the village base to create the region’s first Pokédex. To catch Pokémon, players will need to study the Pokémon’s behaviour and sneak close enough to throw a Poké Ball, while wild Pokémon battles can be initiated by throwing the Poké Ball containing a partner Pokémon near to the targeted Pokémon.

In addition, a new update was announced for the Pokémon HOME service. The new Catch Calendar lets users view their Pokémon sorted by the dates on which they were caught. Users can also now view their Pokémon from different angles. 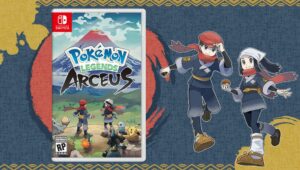