In this edition of the column we take a look at New Pokémon Snap, available now on Nintendo Switch. 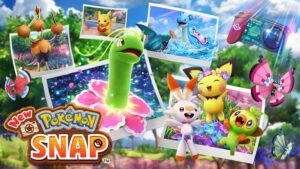 It was 1999, and I was getting ready to finish high school, with oodles of optimism for attending university and one day becoming a teacher.  However, my life was thrown off course in unexpected ways late that year, and I ended up with a surprise windfall of game systems, with both an N64 and a PS1 plopping into my lap during the holidays.  The original Pokémon Snap was one of the first N64 games I played, and I have warm memories of it.  Fast-forward to more than 20 years later, and I’m once again picking up my camera to fill out not a Pokédex, but a Photodex.

The story of New Pokémon Snap is simple: The Lental Region, largely ignored since it was explored one hundred years ago by a daring navigator, is once again in the eyes of Pokémon scientists.  Led by Professor Mirror, a crack team is researching the region from their newly built lab, and have tagged the player to be their photographer, who heads out onto the myriad islands of the region armed with nothing but a camera that looks suspiciously like a Nintendo Switch, cruising along in the NEO-ONE exploration unit.  There’s also some callbacks to the original Snap game, such as Todd joining the team to serve as an advisor on grabbing those high-scoring photos.

New Pokémon Snap has an easy-to-understand premise, amounting to “go take pictures” but this uncomplicated surface has a surprising amount of depth and challenge lurking underneath it.  Much like the original Snap, each level is on a strict route, which takes several minutes for the player’s all-terrain floating vehicle to slowly trundle down.  Completing a course doesn’t take much time — most are five minutes or less — though a course will end prematurely if the player fills up their memory card with a maximum of 72 photos.  Then it’s back to the lab for evaluation, where the Professor is on hand to rate each titular snap.

Photos are divided into four categories: one star, which represents a simple photo of each Pokémon; two stars, generally a Pokémon eating or reacting to being bonked by an object; to qualify for three stars, a Pokémon must be performing an action, which is fairly intuitive to activate; a four-star rating is reserved for the rarest of photos, and involves triggering very specific behaviours, often with complex requirements and usually involving other Pokémon.  Within each star ranking, Professor Mirror scores a photo based on a number of categories, including the pose of the featured Pokémon, whether it is facing the camera, how centred the photograph is on the subject, and whether other Pokémon are snapped at the same time.  Once those points are added up, a photo gets a final rating, either bronze, silver, gold, or platinum if the photograph is worth greater than 4000 points.

To assist budding photographers in scoring the most coveted snaps, the Professor provides a variety of tools, which are slowly unlocked as the game progresses.  Players will need to experiment thoroughly, as many factors influence what possible photos can be scooped.  Most courses feature both day and night versions, and which Pokémon appear or what activities they’re undertaking, may be drastically altered.  Each course also has a research level, with experience earned by submitting photos for evaluation.  As the research level of an area increases, more Pokémon will appear, frequently with new interactions, though if a player is seeking out a very specific pose, the research level can be adjusted downwards.

The game looks absolutely darling, with Pokémon showing off a variety of moves made famous by the anime or other mainline titles alongside new, albeit predictable, behaviours.  To assist in scoring all the three- and four-star scores, the various members of the lab’s research team give requests, which act as an in-universe hint system.  In general, these include the course, time of day, and other details needed to secure a unique photograph.  That being said, some of the hints can stray a little too far towards the obscure, and it will take a dedicated photographer with ample patience to secure photos of all 200-plus Pokémon (and counting), let alone snapping one of each star ranking.  Making the task easier is the game’s equally bright and cheerful music, which makes the short jaunts into the field stay fairly fresh, despite their repetitive nature.

New Pokémon Snap is sure to please fans of the original and has a good balance of gameplay suitable for players of any age, meaning those who grew up with the original Pokémon Snap have a sequel worthy of being handed down to the next generation as well.  It’s the sort of comfort game RPGamers can come back to over and over again, whether it’s been two days or two months since their last time with it.  After all, there’s always the next photo to capture those coveted high scores.