Monochrome Order is a fantasy RPG and was released digitally in 2019 for iOS, Android, PC, PlayStation 4, Xbox One, and Nintendo Switch. The game puts players in the role of a newly-appointed Arbiter, who has access to ancient magic known as Judgment and can use it to make decisions to impart their sense of justice upon the area. It features multiple endings and eighteen potential allies. 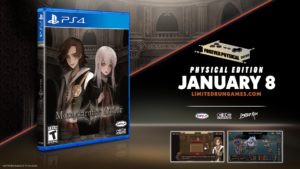