Nintendo has announced that Fire Emblem: Shadow Dragon & the Blade of Light, the very first game in the Fire Emblem tactical RPG series, will be released on Nintendo Switch. The game will be released in North America and Europe on December 4, 2020. A digital version is available to pre-purchase on the eShop for $5.99. The digital version will only be available to purchase until March 31, 2021. In addition, a Fire Emblem 30th Anniversary Edition will be available to purchase from selected retailers in North America. The edition is priced at $49.99 and includes: 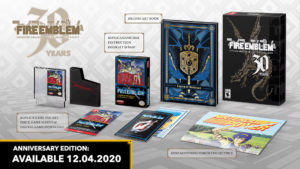 Fire Emblem: Shadow Dragon & the Blade of Light was originally released for the Famicom (Nintendo Entertainment System) in Japan in 1990. The game has not previously been released in English, though a remake — Fire Emblem: Shadow Dragon — was released worldwide for Nintendo DS. The Nintendo Switch version adds new features, including the ability to save and load a bookmark, fast-forward options, and turn rewind.