Even though this spin-off doesn’t offer a lot of differences from the standard Story of Seasons formula, it is a solid entry into the franchise and worth checking out if you fancy a more leisurely paced game.

Whether you are familiar with him or not, Doraemon is a staple of Japanese culture, having existed since 1969. This robot cat with many gadgets has stolen the hearts of children and adults alike for over fifty years. Doraemon hasn’t really had any success in North America until the release Doraemon Story of Seasons back in October. I’ve put roughly forty-five hours into the game so far, and while it’s charming, it suffers from the usual issues that Story of Seasons-style games often have.

The story begins with friends Noby, Sneech, Big G, Sue, and Doraemon planting mysterious seeds. Upon planting the seeds, Doraemon and friends find themselves transported to the world of Natura. Arriving in this land, where a mystical tree resides, Doraemon realizes that many of his trademark gadgets have gone missing. While looking for Doraemon’s gadgets, Noby and friends decide to help the residents of Natura out by assisting them in their day-to-day lives. Taking on the role of Noby, players are primarily given the role of revitalizing the town’s local farm.

If you’ve played a Story of Seasons game, then you’ll likely be familiar with the formula of growing crops, animal husbandry, fishing, mining, and bug catching. Every day when Noby wakes up, players have free reign with how they wish to spend their time. With a set amount of stamina that must be monitored, Noby is able to rotate through a variety of activities, and when it runs out, he winds up in the local doctor’s office, having lost a day of progress. Noby is also expected to engage with the townsfolk, providing gifts and participating in local festivals. 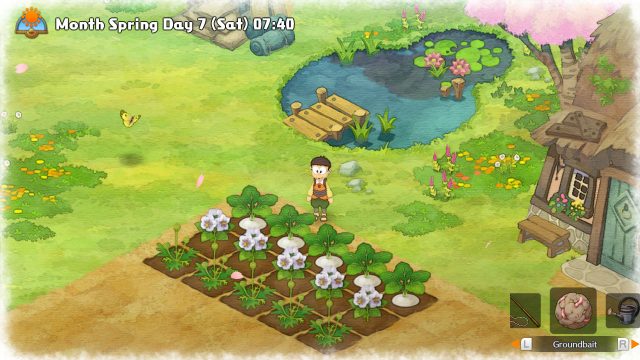 Gotta plant all the turnips!

That’s where things get a bit challenging as Doraemon Story of Seasons is not the best at directing it’s players through the game’s story. The game wants players to move at a leisurely pace, but what is challenging is that it’s hard to uncover how to move story events along. While each towns person has a corresponding heart level, it’s not always obvious how to find story events or complete tasks as there’s often little information to go on. This is why it’s taken me forty-five hours, and I still feel like I haven’t gotten a good grasp on finding all of Doraemon’s gadgets or how to push the story forward.

On the other hand, I will say that it’s an enjoyable game to play. There’s something very kind and gentle about Doraemon Story of Seasons’s presentation and localization. The latter in particular is fantastic, chock full of great humour and silly puns, and it does a great job of emphasizing what it means and how it feels to help others. There aren’t a lot of games out there that focus on kindness or friendship the way that Doraemon does, and the game succeeds not only in its ability to provide a zen-like experience for the player, but also in its worldbuilding. There are some notable differences between Doraemon and Story of Seasons, the main one being that there is no marriage element in the game. Noby and friends are just too young to be gettin’ hitched. 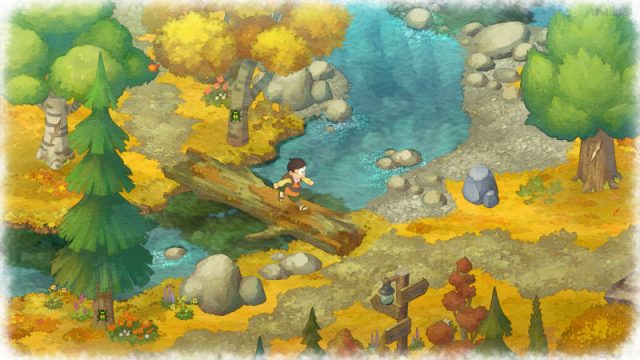 Fall is the most beautiful season of them all.

The game looks absolutely stunning on the Switch. There is a softness throughout in its choice of colour palette, especially in the designs of East and West Natura. It’s beautiful to watch the way in which the seasons change in this game, as it’s often a calming experience. The music is soft, serene, and fits the tone of the game quite naturally.

While the story of getting home in Doraemon Story of Seasons is ostensibly stressful, the game is anything but. While I wish I had a full review to share with everyone, the reality is that this is a game where it is a long and ongoing process. It’s been such a relaxing game to play when dealing with the stresses of everyday life, and I think it has a lot to offer to any RPGamer looking to play something of a much slower pace. Although I have had moments of frustration in trying to advance the story, those moments are minimized when I find myself getting sucked into the routine of Noby’s day-to-day.  Even though this spin-off doesn’t offer a lot of differences from the standard Story of Seasons formula, it is a solid entry into the franchise and worth checking out if you fancy a more leisurely paced game.