Super Rare Games revealed that it is releasing a physical edition of Image & Form Games’ SteamWorld Quest: Hand of Gilgamech. The physical Nintendo Switch release will be available to pre-order from November 7, 2019, exclusively through Super Rare Games’ website. The edition will cost £29.99 and include a 20-page full colour manual, interior artwork, exclusive sticker, and three randomly selected trading cards from a five-card set. 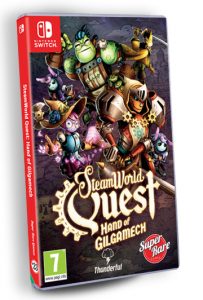