Cyberpunk 2077 put in a significant appearance at today’s Xbox E3 Briefing. CD Projekt RED provided a new trailer for the game, which featured the debut appearance of Johnny Silverhand, who is portrayed by and modelled after actor Keanu Reeves. The actor appeared on stage to introduce the reveal of the game’s April 16, 2020, release date.

CD Projekt RED has announced two editions for Cyberpunk 2077, which will be available to pre-order soon. The standard edition will include a copy of the game for PC, PlayStation 4, or Xbox One, a game map, postcards, stickers, a world compendium booklet, a digital soundtrack download, a digital art booklet, digital wallpapers, and a digital copy of the Cyberpunk 2020 sourcebook. 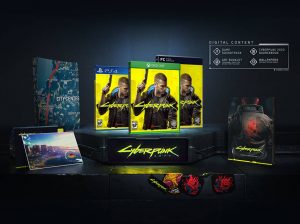 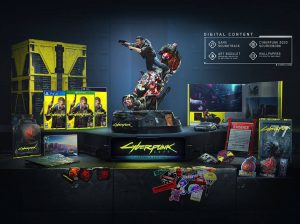 The $249.99 collector’s edition will include the contents of the standard edition plus a 25cm (10-inch) statue of the game’s protagonist, a SteelBook case, a hardcover artbook, a collector’s box made to look like one of the buildings in the game, a Quadra V-Tech metal keychain, a Night City guide inside an evidence bag, a metal pin set, and embroidered patches.

An adaptation of the pen-and-paper game Cyberpunk, Cyberpunk 2077 is an open-world action RPG set in a dystopian future. Players will create unique characters, complete missions, augment themselves with upgrades, make allies and enemies, and explore the world from a first-person perspective. The game will be released on PC, PlayStation 4, and Xbox One.