To Lose One Brother May Be Regarded as a Misfortune…

The announcement of a game based on Universal Studios’ The Huntsman movie franchise did not immediately grab my attention, such is the reputation of many movie tie-in games. However, further reading about The Huntsman: Winter’s Curse piqued my interest as developer Desert Owl Games has been allowed to create something different from what one would usually expect from a licenced title. However, while it is refreshing to see something different in that respect, the game itself isn’t strong enough stand out in the ever-more crowded RPG space.

The Huntsman movies take heavy inspiration from fairy tales such as Snow White and The Ice Queen. Winter’s Curse appears to be a more original side-story set in the world, keeping the fairy tale theme but requiring no knowledge of the movies to enjoy. The game stars Elisabeth, the younger sister to four brothers, all of whom have left home to go on their own adventures and not returned since. Following her father’s passing, Elisabeth resolves to go on a journey to find her missing siblings, and is quickly joined by the mysterious Marcus, who has his own secretive reasons for helping Elisabeth. 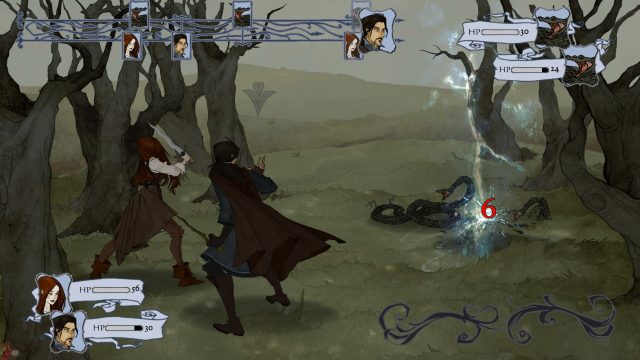 The writing is generally snappy, but begins to struggle against a dull structure as players simply go from battle to battle in the five episodes (or books) that make up the full game. It plays out in a standard visual novel structure, with players getting to make decisions every now and then, but the majority of these feel very inconsequential. The world and most of its characters also feel rather underdeveloped: all of the places visited are just generic villages, caves, or magical forests, and Elisabeth and Marcus are the only characters that have any elongated part to play. That said, there’s good chemistry between the two and it manages to keep the story interesting.

The dynamic turn-based combat system features actions drawn from a deck based on what each character has equipped. Each of the four gear slots provides two possible actions and potentially a passive bonus. In addition to damaging enemies and healing allies, actions can have a number of effects, such as delaying enemy turns or reducing their damage. It requires a decent level of concentration to assess which move is best for the current situation. A basic levelling mechanic rewards characters with more hit points and the chance to unlock other passive bonuses such as extra damage to humanoids or faster speed between turns. The system is deep enough to keep players engaged, however, it moves more slowly than is ideal and things start becoming repetitive before too long.

Each of the game’s five chapters takes between one and two hours, so it’s not a game that will take too much slogging to get through, but as mentioned above, repetition sets in. Short sidequests pop up every now and then to usually provide an extra battle or two but don’t provide much different from the rest of the game. It’s slightly disappointing that the PC version doesn’t appear to offer proper controller support (though one would safely assume this won’t be an issue for its upcoming PlayStation 4 version). The controls and UI are simple enough — though it can be easy to accidentally select options when clicking through the text with the single autosave preventing backtracking — that this shouldn’t preclude anyone from the game, but it will be a minor annoyance for some. 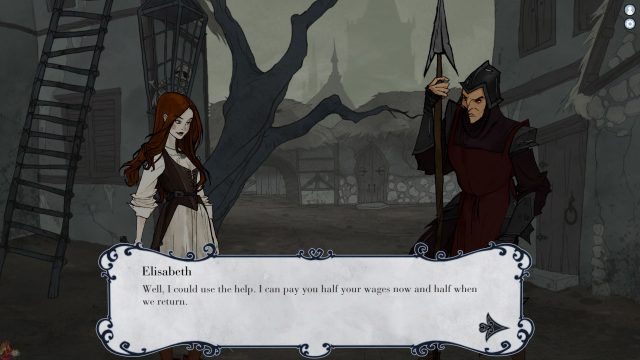 The good news is Elisabeth only needs to pay half.

The art style is nice, though the image that accompanies the narrated openings for each book doesn’t fit with the rest of the game and there is obvious portrait reuse for many of the generic NPCs. There are a few appreciable touches on characters, such as party members’ changing to reflect new armour and weapons, but the vast majority of backgrounds aren’t all that interesting. The soundtrack isn’t the deepest, but there are enjoyable tunes nestled within it. The story might have benefitted from voice acting, and it’s disappointing that this only goes as far as the narrated opening sequence and some random sounds. It is an understandable omission, however, given the likely small development budget.

Overall, The Huntsman: Winter’s Curse comes off as an interesting little title that fills a spot for those wanting something fairly short and easy to get into. Saying that, things start to drag toward the latter stages with its rudimentary structure failing to mix things up. The game certainly won’t appeal to those looking for excitement and action, but as a relaxing change of pace it works well enough. 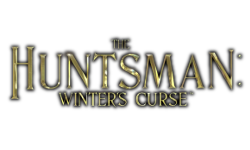