One of the more unexpected localisations in 2017 is The Caligula Effect. Developed by Aquria and published in Japan by FuRyu, it’s certainly not one many pegged to be picked up and released in North America and Europe by Atlus USA. I wish I could say that it was worth the effort of doing so, but sadly that is not something I can do.

Persona and Persona 2 writer Tadashi Satomi came on board for The Caligula Effect and its story is one of the few aspects that stands up. The game takes place in the virtual-reality city of Mobius where all the human inhabitants take the forms of high-school students. All of those present have entered the virtual world trying to forget the miseries of real life, happily staying inside the virtual world for multiple years while their bodies lie comatose. However, the player-named protagonist finds the illusion shattered, and joins a group of like-minded people in the Go-Home Club trying to find a way out of the world run by AI/virtual idol, μ.

The Caligula Effect uses this premise to good effect, with characters often appearing completely different from their real-life personas. Pleasingly, the game doesn’t handwave this away and in fact makes heavy use of the dichotomies throughout, as well as the various pasts of the major players involved except the main character, who remains a blank slate throughout. Some of the most interesting aspects are reserved for the character episodes featuring members of the Go-Home Club that unlock based on a combination of how often the player has talked to them and story progression. These stories are the highlight of the game, revealing the reason behind each character’s original appearance in Mobius, then compelling them to come to grips with it instead of forever running away.

Though the individual character stories wrap up nicely, the overall ending is a bit of a damp squib. While it provides a good stopping point for the cast, it makes no effort to explore the metaphysical questions that are brought up throughout proceedings. There are plenty of high concept aspects that could’ve been explored but are promptly dismissed. Ultimately, while it provides plenty of interesting aspects, the story is nowhere near strong enough to be able to overlook the multitude of flaws. Atlus’ localisation is workmanlike, without any glaring issues. 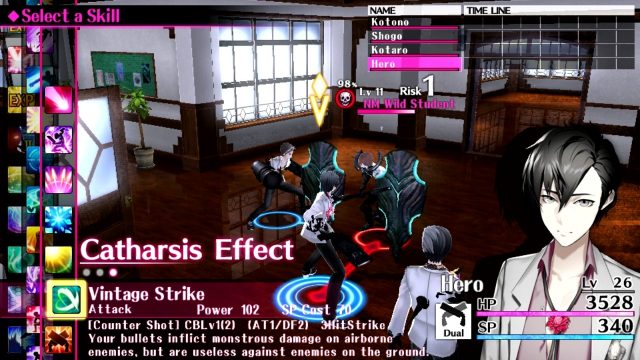 Of all those skills, you’ll only ever need about five.

Combat also has some interesting ideas, but the implementation ruins things. The game is an odd mixture of turn-based and real-time with a heavy emphasis on location and hit boxes. When characters are ready to act, players can queue up to three actions. These actions will then all play out for everyone at the same time, with one of the possible actions allowing party members to move around the area, perhaps to avoid an incoming attack. Thankfully, rather than having to guess what their actions will do, players get to see a simulation showing the outcome these choices are likely to produce based on what everyone else’s — including the opponents’ — current plans are.

A lot of skills turn out being fairly useless as they are geared towards specific coordination that is highly difficult to achieve in practice and simply not worth the effort. Usually just going all-out is more than enough to deal with a threat, perhaps spending time to recharge or avoid attacks on the rare occasion when the enemy doesn’t fall over after the first onslaught. Skills seem to be overpowered on the whole; enemies can quickly knock out a party member in the rare cases that they actually manage to get off proper attacks. Enemies are efficient at stunning, but again this only applies if they actually survive the free onslaught at the beginning.

The end result of this odd implementation and balance is that the combat system is largely ineffectual at providing any engagement. Instead, things just become tedious as players simply repeat the same effective actions every single time, once in a while getting another turn in case the enemy does interrupt the chain, or when another nearby opponent decides to join in. Not helping with the tedium is the ridiculous number of enemies mindlessly wandering the generic corridors. Players will quickly learn that avoidance of ninety percent of the possible combat opportunities is the only way to preserve sanity.

Trying to keep up with its psychological themes, equipment is replaced by physical manifestations of the subconscious. That said, these simply work exactly as one would expect equipment to, with six slots providing bonuses to various stats. Extra manifestations can be found as battle drops or scattered around the dungeons, many of which require defeating a specific enemy to unlock. Players can also unlock new skills for characters using points. These are awarded sparsely, however, and dumped into a communal pool that is very quickly depleted each time players want to give a character something extra for combat options. 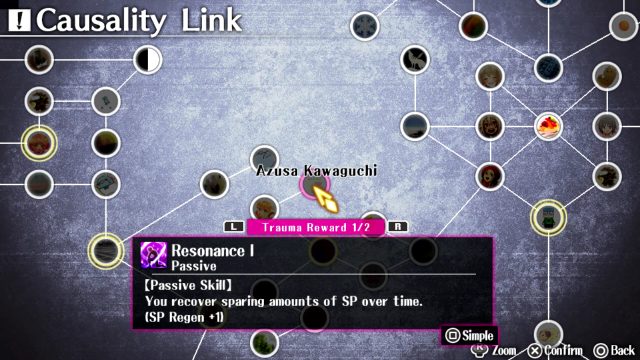 There are a lot of potential party members to recruit. You don’t need to bother with any of them.

Aquria previously developed a couple of Sword Art Online games, and appears to have shoehorned in certain features from those. Players can recruit any named character, though this feature is rendered completely meaningless by the sheer number of people and the fact that there’s almost nothing to differentiate them at a glance. Recruiting such characters uses a mindless process of talking to them enough times, assuming that one is actually able to find them while having spoken to enough generic friends beforehand. As the standard characters are more than good enough to complete the game with no problems whatsoever, outside of one forced section there’s no real reason to use the feature whatsoever. Players can also “chat” online with anyone they’ve met, but this is simply a matter of selecting one of three generic statements before getting back a line of useless drivel in return.

Visually, the game is poor at best. The character models are not particularly impressive and the location design is incredibly dull. Players will have to wander down what appear to be arbitrary masses of corridors in boring tile sets like a school, library, and shopping centre, with no distinguishing features or logical design to them. It’s also a mess technically. Players should expect lengthy loading times, an abysmal frame-rate, and very poor responsiveness to button presses.

Perhaps the only other select area of strength lies in the music selection. With virtual idols and their composers being important in the plot, the game has elected to use music from real-life counterparts, and does so in a fairly interesting way. While exploring, the game uses the instrumental track before switching into the full song whenever combat is entered. However, limiting the music to just one — pretty short — song per dungeon begins to drag, and if the game was any longer it could very easily become a grating issue rather than a positive. There’s not too much to say about the Japanese voice acting, it does the job without any issues.

Sadly, The Caligula Effect really just amounts to a waste of time. It’s a shame because there’s some neat ideas within it, particularly on the premise and story side of things, that are stuck behind terrible design choices and poor implementation. Despite its short length — approaching twenty hours depending on how well players can avoid the mindless drones — there’s no reason to abandon other plans to give it a try.