In the late 1990s, the original Harvest Moon released for the Super Nintendo, and gamers everywhere learned some simple truths: farmers always plant crops in 3×3 grids and win over their wives with a simple blue feather. Fast forward twenty years past dozens of new titles, side entries, and developer-publisher splits, and Stardew Valley, a homage to the long-running series created by Eric “ConcernedApe” Barone, comes along. Stardew Valley was developed solely by Barone starting upon his college graduation in 2011 and initially released in February 2016 on PC. Ports to Mac, Linux, PlayStation 4, Xbox One, Nintendo Switch, and PlayStation Vita would follow over the years, with total sales reaching over 3.5 million copies. Updates have followed with new events and crops added throughout the years along with multiplayer support for PC in 2018. Multiplayer support is forthcoming on all other platforms except the Vita.

Stardew Valley opens with a character creation screen allowing the player to pick a gender and the standard RPG character creation stuff like hair, eyes, skin color, shirt, and pants type and color. After selections are made, the game begins with the player’s dying grandfather handing him a letter and telling him to open it once he’s grown up and life has crushed him down. Twenty years pass and, as a cubicled employee of Joja Corporation, life is indeed crushing, so the player opens the letter and inherits their grandpa’s old farm in the laid-back, scenic Stardew Valley. 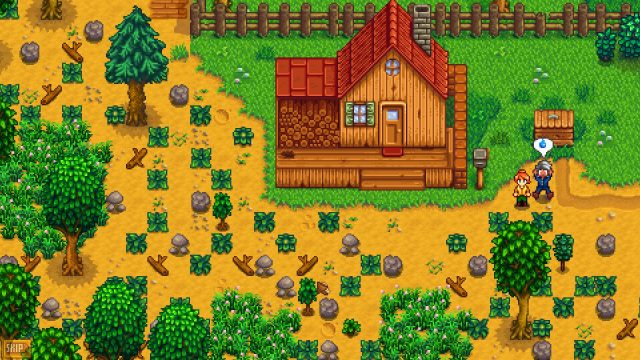 Your farm starts out a bit rustic.

At its heart, Stardew Valley is a farming simulation. The farming mechanic is built to incorporate the best of every game that it pays homage to, with various seeds available to be planted in specific seasons needing to be watered daily and, with few exceptions, harvested before the start of the next season. Barns can be built and animals raised for their eggs, milk, and other products. For the first couple of seasons, every bit of micromanagement is done square by square and cow by cow, but as the game progresses, tools can be upgraded and farm automation products can be crafted, requiring less time to be spent on individual plants and animals. The automation and upgrades are timed quite well to coincide with when the individual farm chores start to feel like, well, chores.

In addition to farming, time can be spent in a local mine, delving down 120 randomly generated floors, with players finding better ore and gems as they progress down. This is a good way to make money and find the necessary materials to upgrade tools and craft new items. Battles occur in the mines using early Zelda-esque top-down hack-and-slash mechanics. It’s simple, but with the variety of monster types and attacks, it can get quite challenging without the right equipment. Learning the attack patterns of monsters, what useful items they drop, and using the environment to one’s advantage feels just as rewarding as any other game more focused on combat.

RPG elements abound in Stardew Valley; however, many are hidden mechanics unable to be pulled up in a menu. Skill points are earned for virtually every task, although unfortunately there is no way to see to what extent this occurs, as actual point values are not accessible. Every night when the player goes to bed, farming, mining, foraging, fishing, and combat proficiencies will level up if enough skill points have been earned. Skill trees branch at levels 5 and 10 when players pick specialties that come with permanent bonuses.

Interacting with Stardew Valley’s inhabitants takes up a great deal of time, but this is definitely time well spent. All have unique personalities and schedules that have them traveling all over town and the surrounding areas. Friendship levels with the town inhabitants can be raised by talking, completing quests, or bringing them gifts. Increasing the level will cause the inhabitants to reciprocate your efforts with presents or recipes to try. Most characters have interesting story arcs that can be unlocked based on friendship levels as well. Stardew Valley offers the choice to interact with or ignore the residents, but getting to know each one is intrinsically rewarding as they are such well-written and well-developed individuals, not typical run-of-the-mill NPCs.

Scattered among the inhabitants are plenty of bachelors and bachelorettes available for courting. Simply raising the friendship level up to 10 stars is all that is needed to be able to propose to and marry any candidate. This is another area where the writing and character development really shine in Stardew Valley. Players are rewarded for their time spent courting with humorous dates and pieces of dialogue that more deeply develop the characters. New personality traits also emerge in spouses after marriage and childbirth. They may take up cooking and provide some food items or walk into the nursery and describe how much they are looking forward to becoming a parent. Same-sex marriages are allowed, so all possible candidates are on the table. Once married, there is a choice to have children in opposite-gender relationships or adopt children in same-sex ones. Make the wrong choice for spouse? At the mayor’s house there exists an option to file for divorce. Regret the divorce? There’s even an option to have the former spouse’s memory wiped so they’re amenable to marrying again. With all of these choices, Stardew Valley doesn’t lack in options for players to build their family as they choose. 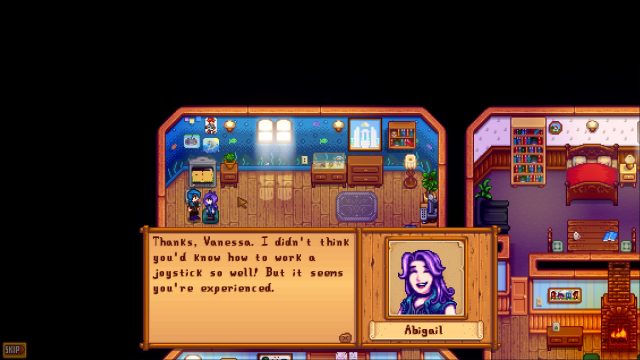 You have purple hair. Marry me?

Festivals arrive on set calendar days approximately two to three times per month. These provide opportunities to speak with townsfolk, purchase some festival exclusives, and compete in small mini-games for prizes. The best part of the festivals is the fact that they’re the only part of the game that is untimed. Typically the clock is running at the speed of one game hour per minute, but during festivals the clock stops and you can take your time with more character interaction or take as long as you’d like to play the various mini-games and grind up to earn the unique prizes only available there. Festivals are something to look forward to as the game years pass and once experienced, they offer enjoyable small goals.

While there is no end-game in Stardew Valley, there are a couple of major milestones or goals. The first is the broken-down community center. The mayor introduces the dilapidated building early in the game and talks about what it used to represent to the small community. This begins the optional quest to put together bundles of difficult-to-obtain goods and have some small magical creatures rebuild it. If refurbishment isn’t chosen, the option to just flatten the place and let JojaMart open up their megastore on the land is available. Either way, options to complete bundles or pay for upgrades around town are available. Fixing up mine carts for instantaneous travel, opening up new areas, and having access to a greenhouse are rewards players will want to earn as they add so much to the accessible area and offer quality-of-life benefits far and above any other in-game rewards. The second major milestone is a visit from grandpa’s ghost: he’s coming back to judge the farm’s progress! After two in-game years, approximately 60-70 hours of gameplay, grandpa’s spirit returns. If enough of his unspecified goals are met, he’ll be gracious and show the ending credits. If not, no big deal, just keep playing and visit his shrine at any time to get his approval. The game goes on for years afterward no matter what grandpa thinks.

Graphically Stardew Valley is a bright, vibrant place reminiscent of the all-time best Super Nintendo games. The sprite work is detailed and varied, and a lot of time and effort went into making each character’s sprite and character portrait unique. The small touches that went into the environments, even along the borders where the player cannot walk, are noticeable and add to the aesthetic of a rich, living world. 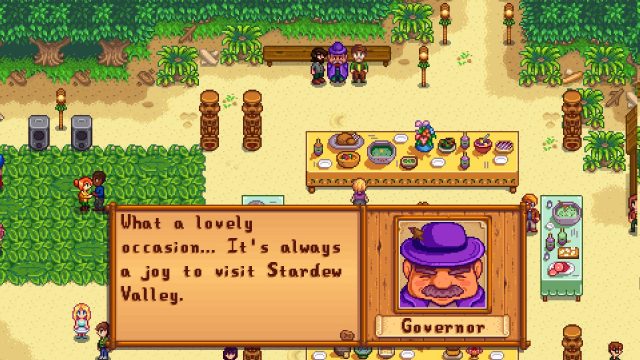 The sound quality of Stardew Valley again seems to stretch beyond what one would expect to hear from a Super Nintendo-esque game. Sure, the same seasonal overworld themes will be heard often, but with a soundtrack boasting no fewer than 70 tracks, there’s always something new to hear. Many shops and townsfolk have their own themes as well as unique ones for specific times or events. The songs are all quite pleasant and fit the setting of the game.

Stardew Valley is an excellent game that let me quietly relax and enjoyably lose myself in for hours on end. The nature of the day-by-day play kept me up late many nights repeatedly playing “just one more day” to see what would ripen or what character scene I could unlock with another gift. I’d played the first Harvest Moon game and plenty of Rune Factory games throughout the years and felt a heavy dose of nostalgia with this homage to those games, while realizing this game took the best features of those games and raised them to a new level. I somehow avoided this game until it released for the Vita, and while there are still a few reported bugs, the frame rate noticeably drops when too much is on the screen, and occasional sound issues, I only had a few crashes in over 70 hours of play, most before the first patch was released. If you’ve enjoyed any similar farming sim over the past 20 years, you’ll likely find Stardew Valley to be an excellent next evolution of the genre to add to your collection.