Feeling Uninspired after a Nocturne

In the idyllic medieval kingdom of Mikado, pristine lakes, lush pastures, and tranquil forests surround a castle town where peasants toil daily and the nobility live out eccentric, easy lives. God watches over the kingdom, and it is by His will that the lucky are born luxorers while most are born into the lowly ranks of the casualry. The king, a descendant of a mythical samurai who battled and sealed away a demonic horde over a dozen centuries ago, keeps the peace through samurai warriors and the monastery’s religious messages of God’s love for a solid caste system. The Shin Megami Tensei series established long ago that all main entries take place in post-apocalyptic Tokyo, not Elysium, and Shin Megami Tensei IV hardly builds the illusion that all is well before kicking the player down the rabbit hole and into Tartarus. What follows is a game that largely copies and pastes mechanics from Nocturne and Strange Journey into a familiar setting that is trimmed down and possibly intended to appeal to a more mainstream or younger audience.

Upon coming of age, juveniles in Mikado trek to the castle’s highest point and participate in a ceremony where a select few are chosen by God to become samurai. This is where we find the protagonist, Flynn, at the start. On the first day he dreams of endgame plot events, becomes a chosen samurai, loses a childhood friend who returns home a rejected commoner, makes frenemies with four other youths chosen to be samurai along with him, and then has dreams foreshadowing the same endgame events again just in case the player didn’t pay attention the first time. Flynn’s companions are cliché enough to be understood with minimal dialogue, but relatable enough that they feel like real people instead of uninteresting tropes. Some subtlety would have gone a long way. SMTIV literally points out which companion will ultimately align with God and a law ending and which will align with the demons and a chaos ending, then makes the obvious move of having a luxorer party member be the law avatar and a casualry party member be the chaos avatar.

Sadly, it’s the characterization weaknesses that continue throughout the game. This is no Persona 3 or 4, Strange Journey, or even Catherine when it comes to the strength of the characters. Flynn is a mute protagonist, but the other party members rarely speak either. After a strong beginning, most of the game’s conversations are other NPCs speaking to Flynn, and the party members who were so chatty at first don’t do much more than silently hang around until a late plot event causes them to desert in separate directions. The plot as a whole suffers from this. The series’ alignment system as a plot device is character-driven in Nocturne and Strange Journey — games that revolve around watching sympathetic people experience horrors that drive them to become paragons and deliverers of a world-shaping philosophy. Without the deep characters, SMTIV‘s attempt at this same plot device falls flat, and it drastically reduces interest in the story, which is what should be pushing the player to keep going. 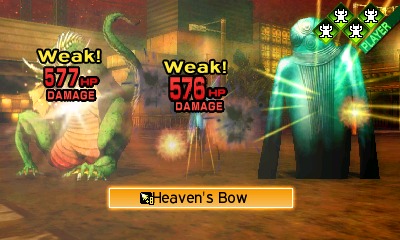 The left demon is named Story and the middle one is named Character Development.

With weak characters and an almost non-existent story, the setting itself spends most of the time in the limelight. Whether that was intentional or not is unknown, but the visual power and design of the various locations communicate more about the world to the player than the people living in it communicate to each other as part of the story. The demon-infested city of Tokyo is full of NPCs and factions who flesh out the setting without contributing to the plot, and Mikado is presented similarly. The biggest issue with the setting is that it’s full of inconsistencies and holes, and overuses recognizable feats without explaining why they work in this world. Ranging from SMT events like a computer turning demons into data and data into demons, to religious events like a spiritual leader’s resurrection, to sci-fi events like time moving faster in Mikado than in Tokyo, SMTIV expects the player to just accept everything without an explanation, and the characters in the game largely shrug off events and realizations that should be mind-blowing.

The main focus of the game, though, is the gameplay. Enemies appear on the screen while roaming the dungeons. With the right mix of reflexes and luck, Flynn can hit them with his weapon to get the first turn in battle. If he misses, the enemy could go first and the party might never get a turn. Nocturne‘s press turn system makes a triumphant return, and SMTIV doesn’t change what isn’t broken. The party gets one full turn for each active party member. One action takes one turn, however if Flynn or one of his demons hits an enemy’s weakness or gets a critical hit, only half a turn will be used. Conversely, if an attack misses or is blocked, additional press turns are lost as a penalty. When Flynn’s party is out of turns, the opponents get a set of press turns and follow the same rules. There is a bit more to it than that, but the result is it encourages smart strategies by granting extra turns for playing well and fast game overs for playing poorly. One addition is that a fighter has a low chance to smirk when blocking an attack or hitting a weakness. The smirk lasts until his next move, guarantees that it will be a critical hit, and makes attacks against him miss in the meantime. Due to how it ramps up attack power, smirking helps bosses and enemies much more than it helps the player. A boss smirking after landing a critical and following it up with an attack all skill can wipe out Flynn and his party immediately through sheer luck.

Needless to say, the game is difficult, and party customization is key to succeeding against enemies that are often just as capable of wiping Flynn out in one turn as Flynn is of wiping out them. Flynn can initiate conversations in battle in an attempt to recruit demons. The conversations are silly and based more on luck than player skill or knowledge. Once recruited, demons can level up to learn new skills and be fused to make new, stronger party members. The player gets full choice of which skills carry over to the fused demon with no randomness or reselecting, so once a powerful skill is learned it can be passed on to all future demons. When a demon levels up and has finished learning all his skills, they can be copied to Flynn’s skillset. This allows Flynn to be fully customized as well, although he cannot learn passive abilities or a few powerful active skills. To make up for this, when a demon copies a skill to Flynn that he already knows, it is automatically improved to increase its effectiveness and decrease the MP cost. 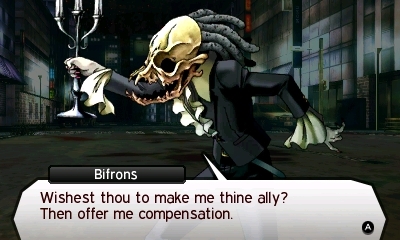 The 2D art of the demons looks wonderful on the 3DS.

A final strength in the customization comes in apps which can be purchased through Flynn’s AI companion at any time. Ten app points are granted when Flynn levels up, and most of the good apps cost between twenty and fifty points. Apps provide a wide variety of bonuses and the player can purchase ones that best fit his strategy. Someone who wants to fuse demons and fill out the compendium should buy ones that reduce the price of purchasing logged demons. Someone who gets overwhelmed by fusion and just wants to use the same demons for as long as possible can purchase apps that increase demons’ stat gains when they level up. It’s the most creative and new feature in SMTIV, and it’s great being able to buy upgrades to support any favored play style. The game’s difficulty and the depth of the customization options aim it squarely at those who want to spend time staring at fusion possibilities, grinding skills for Flynn, and recruiting every demon they meet. With the right apps and a new fusion feature that offers one-click fusion recommendations, those who don’t want to bother with the time-intensive options can still succeed.

There are a slew of minor oddities and hiccups that are worth mentioning. Meguro’s memorable, distinct style as a top-tier composer is deeply missed; the music is fine but forgettable. The outdoor map of Tokyo is incredibly confusing and hard to navigate. Many of the quests give vague instructions on what to do, leaving the player to blindly explore Tokyo with the poor map as the only reference. There are also some main plot points that are easy to miss if the player doesn’t talk to every NPC and find every door, or unknowingly explores past a story event and gets lost. The game’s opening is an extremely hard trial of patience, luck, and reloads while the player is still feeling out the systems. It slowly settles down and stays dangerously hard to the end, however the first few hours, including an early boss that spams attacks Flynn is deathly weak to, is out of place and unbalanced. Flynn can pay a large sum of money to avoid a game over and be dropped back to where he died, but Atlus let 3DS Play Coins be used for this instead if the player has them. The Play Coins break a system designed to be a major financial decision tied to the game’s difficulty. Many areas and enemies inflict poison ailments non-stop, and the game is missing a balanced way to prevent or heal it that doesn’t involve going broke.

As a veteran of SMT games, my disappointment with Shin Megami Tensei IV‘s characters and story left the strongest impression. The plot is full of holes, inconsistencies, and unbelievable character actions and reactions. There are some creative moments late in the game where SMTIV presents the alignments and philosophies in a fascinating, new way, but for the most part the plot, characters, and morals fail to come together as part of a coherent setting. A newcomer to the series could be impacted by the powerful philosophical and religious messages that were a repeat for me, and that general, pervasive sentiment gave me the impression Atlus is aiming for a more mainstream audience, or an audience new to the series who would be seeing everything for the first time without realizing what they were missing. The combat and customization are as strong here as they are in most SMT games, providing enough incentive to keep playing through and enjoying the otherwise flawed game. There are easily over 100 hours of gameplay for someone who wants to see, customize, and experiment with everything. SMTIV is fun and worth playing for its strengths, but it’s not the complete, polished game I’ve come to associate with the series and its spinoffs.