I really don’t like reviewing ports. I really don’t like reviewing ports of games I’ve already played and reviewed. There’s only so much that can be said about a game, and while discussing the changes and issues the new version has is important, there’s only so much space that it can fill up, and this results in a lot of retreaded ground. At least, this is normally the case, but Shin Megami Tensei: Persona 3 Portable is one of the rare exceptions to the rule. I don’t have to retread any ground at all because there is an incredible amount of new content to cover, so much so that it feels like a brand new game. With that in mind, I will direct you to our copious number of Persona 3 reviews for all the nitty gritty of the game, while this review will instead focus on what’s new, and most importantly, why Persona 3 Portable is the best version of the game yet.

By and large, the story of Persona 3 Portable remains true, if not identical, to the original. You’re the new transfer student starting at Gekkoukan High, and you find yourself drawn into a battle to save the world during the “hour between hours,” when everyone else is transformed into strange coffins. With that in mind, Persona 3 Portable offers an incredible amount of new story content thanks to the addition of a new female protagonist. With FeMC, as the character is being affectionately labeled, in the lead, the entire game takes on a new perspective. Characters who were a romantic interest are now just friends, and your friends from before become romantic interests. However, the changes are not as cut and dried as that.

Veterans of Persona 3 FES should know that there are a total of twenty-two social links in the game. In Persona 3 Portable, for the female protagonist, eight of them have been completely redone with new characters, while most of the rest have been significantly altered. Two of these, the leader of the Tennis or Volleyball club and a girl in charge of the school library, are brand new characters to the game, while the remaining six further enhance existing characters: your male allies. Junpei, Akihiko, Ken, Shinjiro, Koromaru, and even Ryoji all receive their own social link, and these all help to expand upon the characters. This is particularly true for Shinjiro and Ryoji, whose social links are by far the highlight of FeMC’s game. Other social links have been so thoroughly modified that they bear little resemblance to their original incarnations. Fuuka, for example, starts a cooking club and asks you to join. While attending this club, as well as while attending the sewing club with Bebe, you can now create items that can be given to your friends as gifts during Sunday excursions.

Even certain major events have been modified for the new perspective. Disappointingly, you can no longer participate in Operation: Babe Hunt, but the infamous hot spring scene in Kyoto now sees you trying to capture the boys rather than evade capture as before. For Persona 3‘s female fans, the shower scene during the Lovers confrontation now features a towel clad Junpei or Akihiko, depending on who you choose to take with you. A trip to Inaba from Persona 4 and a 14-year-old Yukiko also feature prominently in the many changes, both minor and major, that Persona 3 Portable offers up. 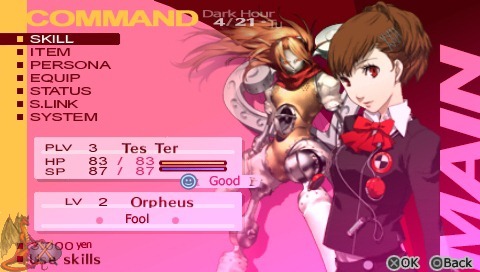 FeMC in all her vibrant, pink glory.

Just as the story has seen dramatic alterations, the gameplay has seen similar improvements and revisions, even on its most fundamental levels. While the One More combat system is still the center of it all, it has been revamped to bring it in line with what was seen in Persona 4. These revisions include the ability to directly control your party members, the lack of turn loss for being knocked down (which applies to allies and enemies alike), and new ally abilities that allow them to take a death blow for the main character, endure a fatal attack with one HP remaining, and even perform a co-op attack that will knock down an additional foe. In general, this allows for a larger margin of error, resulting in fewer unexpected deaths and retries without dramatically reducing the game’s challenge.

Not all the changes brought over from Persona 4 are good, however. The main character is now limited to a single type of weapon, where before he could choose from any type. The male protagonist is restricted to one-handed swords, while FeMC uses a new weapon type, naginatas, which are a type of bladed Japanese polearm. Luckily, both these weapon types are quick and accurate at striking shadows while exploring Tartarus, something that was not true of the katana in Persona 4. While it’s disappointing to not be able to use your favorite weapon anymore, this alteration has less of an effect in Persona 3 Portable than it did in Persona 4.

Persona 4 is not the only Megaten property that Atlus drew from when creating this new version of Persona 3. The developers also took a page from Strange Journey, introducing brand new Skill Cards that allow you to teach any skill to any persona. These skill cards work a fair bit differently from the sources in Strange Journey, but the basic concept is the same. Every persona in the game now holds a skill card within itself. When it reaches the correct level, that skill card will be given to you. You can now use that skill card to teach it to any persona you wish. For example, let’s say you have the persona Pixie. At level 4, Pixie grants the skill Dia. Now, let’s say that, as you’re exploring Tartarus, you acquire the persona Jack Frost. As you may recall, one of the quests you get as the game progresses is to produce a Jack Frost that knows the skill Dia. Well, since you’ve already acquired a Dia skill card from your Pixie, you can now teach Dia to Jack Frost directly, completing the quest.

Another major new feature is the Vision Quest mode, which doesn’t become available until the game is nearly complete. In this mode, you can refight all the bosses from earlier in the game, their strength increased. Defeating them grants rare skill cards as rewards. There are also a series of five specially designed fights, in which your party, level, and even personas, are specifically restricted. These fights are almost like puzzles, and might take some work to beat.

The changes continue outside of Tartarus as well. The most notable, of course, is the change in how exploration works inside the town. While in Persona 3 and Persona 3 FES you could actually walk around through a 3D environment, this has now been changed to a top-down overview similar to an adventure game. Make no mistake, however, the visuals are still quite attractive. Characters are still displayed on the screen, just as small sprites. Unfortunately, your main character is now reduced to a simple cursor and an anime portrait. This design continues during social links and major story events, which sadly leads to the only major problem this version has. 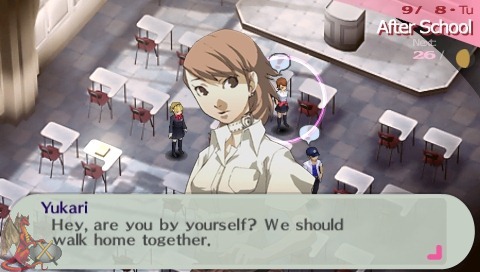 The lack of animation for cutscenes is disappointing.

That issue is cinematography. Persona 3 Portable simply lacks the flair of the original versions, and it’s for this reason and this reason alone that I unfortunately cannot recommend it to players new to Persona 3, at least not over the PlayStation 2 versions. Persona 3 is packed with many truly emotional moments, ones that really stick with you long after you complete the game. The reason these moments are so effective is largely visual. There are certain animations that are so incredibly vivid, their impact simply cannot be denied. For new players, you would be doing yourselves a disservice to experience the game without that visual flair. Despite all the improvements Persona 3 Portable offers, the lack of those animations really dampens the impact of the game’s story.

Although much less impressive than the original PlayStation 2 versions, Persona 3 Portable still sports some stylish visuals. In town, high quality anime portraits and gorgeous backdrops provide ample atmosphere, while in Tartarus, the game switches back to the full 3D exploration seen in the original. The art direction is as impressive as ever, and the interface has received a colorful overhaul, overlaying it with blue for the male protagonist and pink for the female protagonist.

Even the audio has changed. Not only has the game received new voicework integrating the dialogue changes with the female protagonist, but there is also a large sampling of new music. While the male protagonist’s version of the game still has all the original music, FeMC has many new tracks, including a brand new battle theme. While not as catchy or memorable as Mass Destruction, it’s still quite pleasant and appropriately energetic. Unfortunately, no soundtrack CD was included with this version. Instead, Atlus opted to include a replica of Junpei’s hat, which is certainly unique as far as pre-order bonuses go.

With its numerous mechanical improvements, ridiculous amount of content additions, and of course the simple ability to carry the game around with you, Persona 3, RPGamer’s RPG of the Decade, is at its greatest in Persona 3 Portable. If you’ve played the game before, there’s so much new content here that it’s practically like playing a brand new game. In fact, Persona 3 Portable‘s biggest audience really should be those who’ve already played and loved the original. Although new players could certainly jump into the series here, as I mentioned earlier, the originals come highly recommended for first-time players. With that said, Persona 3 Portable also offers a brand new Beginner difficulty that’s even easier than the Easy difficulty seen in FES, so if Shin Megami Tensei‘s notorious difficulty levels are what have kept you away, this is definitely the version for you. Persona 3 Portable is, without a doubt, the best version of the game so far, and a game that any and every Persona 3 fan should own.