Melding and combining genres is a bit of science.  Luckily, in Funktronic Labs’ Nova-111 the player has a compatriot named Dr. Science.  The game combines a top down dungeon crawler with a puzzler, mixing moments of real-time and turn-based gameplay in an interesting degree.  These mechanics rarely get a chance to wear out their welcome either as the game happens to have a short completion time, but it could take a while to find every pesky secret.  If Nova-111 had more than bite-sized portions, there would be something great here.  As it stands, the short run time means it will breeze by quickly, which works out well on the go with this Switch port.

In Nova-111, the player controls an orange vessel that’s stranded after a scientific experiment has gone wrong.  The rest of the team has been pushed all over the space-time continuum across various planets, and the player is tasked with finding out what went wrong and collecting as many scientists as they can.  Well, collecting a few of the members, as outside of Dr. Science they all just blend into the background after a line or two when they are saved, and picking them up affects a high score that doesn’t change anything of importance.  The high score itself is determined by how fast the level is completed, how many turns taken, how many secrets were found, and how many scientists were saved.  Dr. Science himself has a bit more to say, but his dialogue is limited mostly to tutorial dialogue or pun-filled comedy that induces eye-rolls as the player propels forward. 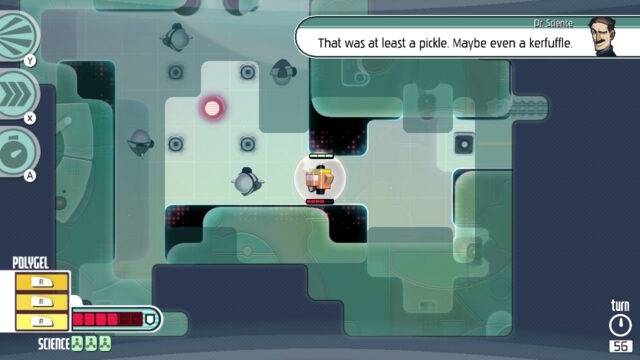 Some of Dr. Science’s insights before the next puzzle begins.

Nova-111 splits up its map into fragments.  There are three major planets that change backgrounds and add new mechanics to the game, and each one is further separated into six different zones that are accessible by an overworld map.  When entering the first-to-fifth zones, players will go through three different tiled areas where there are puzzles and enemies to bypass to reach the exit square before booting back to the overworld with the next zone unlocked.  The sixth zone is a boss battle; these foes have large health bars and a unique mechanic that works both as a puzzle as well as a satisfying fight.  These boss battles are highlights in the game as they mix all of the elements learned on the planet into a fun conclusion rather than feeling like just another ingredient.

The orange vessel moves one space at a time in a turn-based manner.  It has a bar for health that starts at five points, with upgrades available after four health fragments are collected.  Maintaining health is important for progression as more mechanics are thrown at the player to juggle, which continues into the final levels.  Players also get science points starting with one usage that can be upgradeable as well.  These recharge by moving around the area, bumping into things, or by waiting a turn.  Waiting makes science points charge a bit faster and doubles as a mechanic to help solve puzzles or make enemies take turns.  Science points have few uses: powering a laser that cuts through indestructible rocks or objects within two spaces, freezing time for a few seconds, and warping, an ability that bypasses solid objects within one tile space.  Each ability is mapped to a different button on the Switch, making this port easy to control, and has plenty of different uses in solving puzzles or defeating enemies. 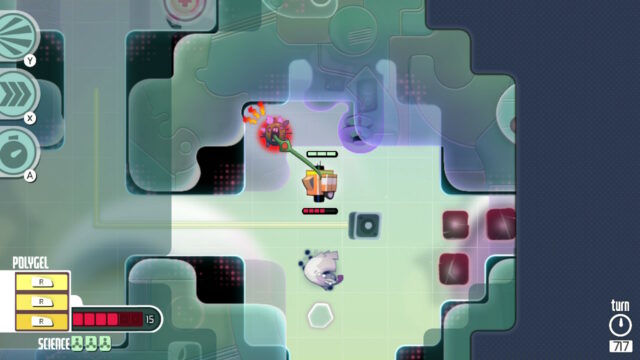 The enemy above is moving in real-time while the one below is turn-based.

At the start, enemies will move in a predictable fashion and flash when they are about to attack the vessel, making them easily dodged and counterattacked.  Real-time mechanics come in with other enemies, for example, there is one that latches a tendril to the vessel and pushes a slow-moving bomb towards the player unless they defeat them in time. Towards the end of the game, some enemies spew fire and others blow a bubble patch that works like flammable oil.  These abilities can combine to ignite fire in real-time, keeping players on their toes, fire can also be used to the player’s advantage by leaving enemies stuck in a patch until they’re defeated.  However, the orange vessel is not just passive, with the player gaining three different types of attacks throughout the game.  While players mostly bump into foes to damage them, they can also detonate a bomb after collecting enough yellow pellet fragments in the map, dealing one point of damage and stunning enemies.  A third option is to use science points for the laser and pierce enemies two tiles in front of the vessel.

Every map is meticulously crafted as a showcase of the latest mechanic the player has learned or skill they have picked up.  Nova-111 works like a big jigsaw puzzle with a proper method to unveil for progress.  This progression can be frustrating at times but definitely can be solved with a little trial-and-error.  Puzzles begin as easily as bumping into destructible blocks until the path is revealed but quickly grow more complex.  In one instance, an indestructible enemy bounces around in a pattern while bumbling into walls, with the player able to herd it to locations where they hit an unreachable switch, allowing the player to progress.  Also, puzzles can either be turn-based or may occur in real-time; it really is a treat to see the new ways the game combines all of its mechanics for the player to experience.  The game has a real knack for letting the player feel elated when they solve a complex puzzle, while also making every death feel like they gained some knowledge to make a different approach and complete the area. 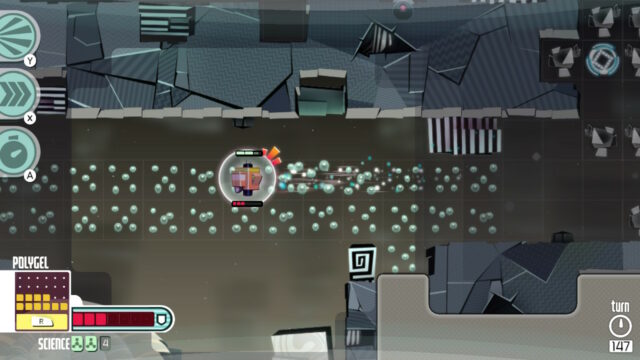 Nova-111 has the musical accompaniment to fit a strategic puzzle game, simply setting the mood and sounding like a casual stroll in outer space.  Sound cues of bouncers hitting walls or switches being flipped are distinct enough to help the player figure out what is affecting the puzzle at hand, even if it is occurring off screen.  Visually, the game suits the mood as each planet looks distinct yet fitting, with enemies that all feel like they could be part of the same alien world that are still noticeably different at a glance.  Early missions feel more exploratory with the only markers being walls to prevent progression.  Later missions keep similar visual cues but reduce the movable grid, causing more wall bumping then necessary due to the confusing swap.  Secret areas are not easy to guess either as some are found by just wandering while others are discovered by bumping into walls that look the same as everywhere else, making it a lucky guessing game rather than relying on pattern recognition.  Ultimately, bumping into everything is not a big issue, but it will still be frustrating for those wanting to get high scores quicker.

Melding real-time and turn-based mechanics cannot be easy, but Nova-111 does it deftly, with its gameplay being the top priority.  Unfortunately, this interactive puzzle game has no story or substance to make it feel like more than a collection of mini-games.  The game itself is a blast to play in handy bite sized chunks, and seeing the new ways puzzles, enemies, and mechanics all combine together can be quite fun.  The game’s relatively short length also adds to its grab-and-go nature. With puzzles that don’t feel too punishing, it’s easy to jump in and feel rewarded for solving each well-crafted and thoughtful area.