Originally released on iOS as Fantasy Chronicles, Mystic Chronicles sees Natsume and Kemco join together for a release on PSP. Kemco has gotten a reputation as a very prolific mobile RPG developer, but also one that evinces no desire to venture outside the basics of the genre. Rather than achieving anything that would counter that claim, Mystic Chronicles is a textbook example of what happens when a developer sticks rigidly to genre foundations.

The game’s battle system is a fairly standard turn-based affair with three party members and the opponents shown in a first-person view. It differs slightly from the standard template by having Guardian Beasts that can be attached to each combatant. These AI-controlled creatures get their own action in each turn and absorb some of the damage their attached party member suffers when hit. Players can select one of three behavioural priorities for each beast, although it seems their usefulness at certain points in battle comes down to luck more often than not. It is also possible to swap out party members or Guardian Beasts at the start of any turn, which can certainly be helpful during tougher battles. In addition to various skills and magic spells, there is an option for multiple party members to combine their actions into a single powerful ability. These are generally unhelpful in most circumstances, as combined attacks are generally less powerful than cumulative individual abilities. There is the additional danger of wasted turns should any of the cooperating members be incapacitated in any way.

While the game’s failure to provide a skill that reduces random encounters until very late is rather annoying, in the game’s grand scheme the need to grind before many hard-hitting bosses makes it a lesser impediment. Fortunately, the game is at least kind enough to provide full experience to the entire party and not just those who participated in combat, which mitigates the grinding slightly. Guardian Beasts recover full HP at the end of each battle, while any downed party members are revived with one hit point. There is also a bond system which allows both party members and Guardian Beasts to raise their affinity when they are in the active party, allowing more damage to be absorbed or for more powerful attacks, although it’s never entirely clear how much effect the bonds have. 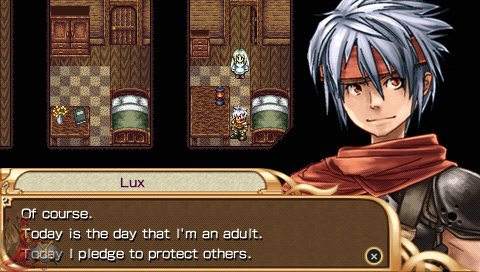 Guess what he fails to do half an hour later.

There are at least a few areas of user-friendliness, such as the ability to save anywhere along with the freedom to escape a dungeon at any time via the menu. That said, the menu UI can often be a pain. For example, players have to add an item to a character’s inventory before using it, and a skill must be re-selected each time for multiple casts. Item usage in the menu also seems to suffer a bug where it will use up the bottom-most item instead of the one actually selected, although the effect will be from the selected item. Overall, the gameplay is relatively solid, but nothing about it stands out over other RPGs.

Mystic Chronicles‘ story stars Lux, a young orphan aspiring to join the Holos Guild so he can help protect his adoptive grandmother and childhood friend. Naturally, things don’t work out quite as planned when disaster unsurprisingly strikes the idyllic village. Despite a redone localisation from Natsume, the story is certainly nothing special. Pretty much every event and plot point has been used in a better way elsewhere, and the game is more than happy to use whatever cliché it can find. The characters are fine and likeable enough, but nothing they say or do distinguishes them enough to become memorable. Players can expect to see credits and “The End” in a little under fifteen hours, some of which will be spent grinding for bosses, particularly in the latter portion of the game. However, after its rather abrupt and disappointing initial ending, the game immediately reveals it has left the resolution of its true final boss, and a fairly big plot point, for the post-game content on PSN, which features plenty of tough new enemies for players to battle.

There is some side content in the form of guild quests, which involve defeating creatures or collecting materials, as well as a generic coliseum. These quests provide generally minor rewards and while they sometimes give something else to do when exploring the rather uninteresting locales, there’s very little reason for non-completionists to go out of their way to do them. Mystic Chronicles opts to have players upgrade character equipment instead of buying new things regularly, a feature that sometimes sports two or three development paths but is still mostly linear. There are times when players will not have the required upgrade items, but at least a team of rodents appears more than happy to run out and freely collect random materials from previously visited areas while adventuring is being done. 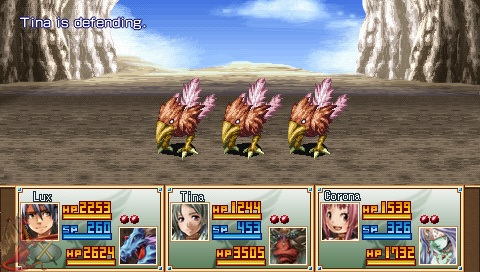 Story progress can be determined by how evil-looking the birds’ colouring is.

The visuals rather belie Mystic Chronicles‘ origin as a mobile RPG. Sprites and locations are certainly sub-par for the PSP, both in terms of detail and design, and the majority of enemies are simple palette swaps of previous ones. The best area of the visuals is in the battle system, where the looping animations of enemies at least enliven the game a bit, though the visuals are still quite basic. There’s nothing off-putting or annoying about any of the visuals, but it’s another case that shows lack of progress from an old RPG template. The chip-tune music in the game is decent enough, but again is pretty standard RPG fare and completely forgettable. As many would probably expect, voice acting is non-existent.

The best to be said of Mystic Chronicles is that it offers a way for RPGamers to kill some hours. The gameplay is solid enough and those looking for something simple to work through should at least find an adequate, if massively clichéd, base here. However, there is no real reason for it to displace another game in anyone’s to-play list, and Kemco’s reputation of sticking to the absolute basics is firmly substantiated here. 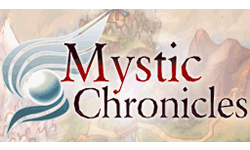