It’s Good to be the King

Eat, sleep, hunt monsters, repeat. Such is the life of a hunter in Capcom’s Monster Hunter 4 Ultimate. The latest in the company’s beast-slaying series brings with it a polished core from the previous entries, along with a variety of new monsters and features that refine the experience to make it the most approachable games in the series. The game adds a straightforward and entertaining story, combined with refinements to tutorials and early missions which should help new players get past the game’s steep learning curve. It’s a refined, beautiful, and exceptionally entertaining experience that stands head and shoulders above not only other entries in the series, but most other RPGs on the 3DS.

The story focuses on the player’s custom created hunter as he or she joins a caravan in search of answers to the mysteries of an ancient relic. Story mostly occurs through conversation with characters between missions, though there are several pre-rendered cutscenes throughout the duration of the single-player experience. The game’s NPCs all feature some very entertaining dialogue thanks to a superb localization, giving context to the various hunts players will be sent on. The story may be simple, but that’s not the main focus of a Monster Hunter game, so what’s here fits the experience perfectly. The action rarely slows down, which makes these exchanges a fun and often humorous break between the intense monster battles. The game’s story culminates with, as one might expect, one of the best hunts in the entire game. Some story does continue on into the title’s high rank endgame, providing an incentive to delve into the game’s harder quests beyond just the new sets of monsters and gear that become available. For those who aren’t interested in the higher level quests or prefer multiplayer, the story does end on a satisfying note.

As should be obvious, hunting is the name of the game in Monster Hunter 4 Ultimate. Besides talking to characters in town, players can buy and craft gear, arrange and equip their Felyne companions, and purchase meals that give buffs and special abilities for the coming mission. Once out on a mission, players will have the freedom to explore the current hunting ground, which generally consists of ten to twelve interconnected areas. There’s a time limit to complete any given mission, but this thankfully isn’t much of a factor until higher levels and multiplayer quests. More of a factor in regards to time is the stamina meter. This is used for actions such as running, climbing quickly, and blocking, but will refill when not in use. The maximum level of the meter decreases as time goes on, but this can be refilled with rations and other food. Combined with a limited supply of health items, players will need to carefully manage their supply of items in addition to focusing on the main task at hand. The level of pre-planning is part of the process, and it adds a good level of additional tension to things. Thankfully, players can bring in enough healing items and food that this should not become a frustrating element as long as players have done the proper preparation. 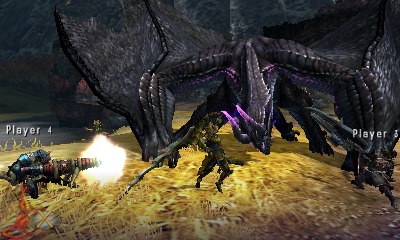 The fierce Gore Magala is the game’s signature new monster.

Fighting monsters themselves can vary greatly depending on the monster, the environment, and even just the weapon in use. Each weapon has its own combos and special abilities, with guns and bows functioning in a totally different fashion from melee weapons. Any weapon is a viable option for hunting, so players are free to use whichever they prefer. New to this entry are maneuverability options that allow players to quickly scale up ledges and perform jumping attacks, and the hunting grounds have a lot more in the way of hills, ledges, and other environmental elements to make use of this. Players can use these to their advantage, but adding another layer to the mix, monsters can as well. Enemies will often escape to higher areas, quickly follow players up cliffs, and even destroy pieces of the environment used for cover. The advantage of getting to higher ground is the ability to take advantage of mounting monsters, so a well-timed jumping attack will activate a quicktime event where players time attacks and movements as to not fall off. If successful, the monster will be knocked down briefly, opening them up to a devastating string of attacks. The level of precision in combat is extremely deep, as this game is far from a mindless hack and slash.

Battles in Monster Hunter 4 are intense and dynamic, and the variety of monsters keeps things fresh and exciting. Each type of monster, excluding sub-species, has its own unique set of attacks and behavior that players will have to learn. Watching monster patterns, reading in-game text, and sometimes simply using common sense will help players discover weaknesses and create an advantage. For example, monsters have destroyable parts such as tails and horns that can weaken their attacks. To help new players along, the game includes tutorials along with tons of in-game help. This entry in particular has greatly refined these, as past games have provided poor help to rookies. Previous entries also often had a large number of mindless gathering and hunting quests at the start of the game, and these have thankfully been either completely removed or made optional.

Crafting also plays a key role in Monster Hunter 4 Ultimate. Parts collected from monsters can be turned into weapons and armor, which will often have properties related to the monster in question. For example, armor created from a rathalos, a type of dragon, will have higher fire defense for armor or give a buff to fire attacks for weapons. Some repetition is obviously required to get the requisite monster parts to craft items, but it is mostly mild until the post game and high rank multiplayer. The higher rank gear will often require rare parts, which will send players out on multiple hunts of the same creature, often asking them to destroy specific parts or capture the monster rather than killing it to increase their chances of a rare drop. During the lower ranks, most of this extra hunting is completely optional, simply giving players the chance to get better gear earlier if desired. In addition to main equipment, decorations can be attached to gear to enhance skills. Crafting gear is a deep process, which can become addictive quite easily. There’s nothing like finishing off a new set of gear and using it to tackle a monster that previously seemed insurmountable.

Monster Hunter 4 Ultimate can get complex, and though the controls can take some getting used to, the game helps players adjust. Weapons within the same group, i.e. ranged or melee, have similar controls to each other, so switching from one to another isn’t too hard. Weapon control help is easily accessible from the in-game menu as well. The interface on the whole is simple so as to not get in the way, but effectively communicates everything the player needs. The UI on the touchscreen can be customized for easy access to items and other functions to allow players to setup things to their preference. Camera controls can be handled from the D-pad, a Circle Pad Pro, or even by centering with the L button depending on player preference. Since it supports the Circle Pad Pro, the game is fully compatible with the new analog nub on the New 3DS, which works quite nicely with it. The interface on the whole is well designed, and makes crafting and other tasks quite easy. 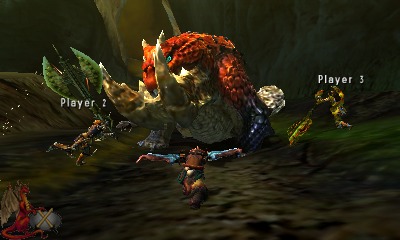 Online play has seen some improvement, ditching the convoluted server system of the previous entry on Wii U. Now players can simply go to the world map via the touch screen and select online play to create a room or to search for one to join. This includes options for locking rooms with a password and joining up with friends. The search allows for filtering so players can find others tackling specific quests or difficulty levels. It’s a nice improvement, though it lacks the chat channels that Monster Hunter 3 Ultimate had, so players will have to find other outlets to chat with other hunters outside of game rooms. In game chat is available via a keyboard and some preset phrases.

The presentation of Monster Hunter 4 Ultimate is far and away some of the best players will find on the 3DS. Monster Hunter 3 on 3DS suffered visually from being a port, but that isn’t the case this time around. Hunting grounds look absolutely gorgeous and really pop with the 3D effect on. Monsters feature complex animations and the detailed models move through the new multi-tiered environments with only the rare bit of clipping. Monster Hunter traditionally has had lots of tribal music along with some more epic themes for later bosses, but this time around epic music shows up during the player’s first encounter with a large monster and stays amazing throughout. There is a good variety of musical tracks available, and they make each battle feel like a classic confrontation, even the relatively easy fights. Monster Hunter has become a flagship franchise for Capcom, and the presentation of this game finally reflects that.

Monster Hunter 4 Ultimate is a game built on the idea of repetition that manages to feel quite the opposite. Through diversity, both in the weapon selection, in the menagerie of different beasts for players to fight, and in the different hunting grounds, all sorts of different experiences become possible. An improved, yet imperfect, online interface extends the experience well beyond the the extent of the single player campaign. Streamlined tutorials provide ways to better ease new players into the series, though the learning curve remains relatively high. At the end of the day, Monster Hunter 4 Ultimate is a brilliant experience that no fan of RPGs should pass up. 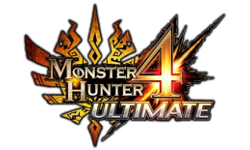