Heroland is the place where everyone can go to be a hero.  Young or old, boy or girl, human or otter, commoner or royal, absolutely everyone is welcome.  Players take on the role of a newly minted tour guide, nicknamed Lucky, and guide tourists through the mock dungeons as unlikely heroes band together to reenact the defeat the Dark Lord. With a rather unique combat system, interesting art direction, and a stellar localisation, Heroland may not please everyone, but whether the park will be pleasing depends heavily on the player’s tolerance for repetition.

The first thing that will no doubt jump out to most players are the game’s strong visuals.  Using voxel-style graphics, the game pairs smoothed, colourful backgrounds with cardboard foregrounds and character models.  To reinforce this look, characters’ movements and actions are similarly paper-esque, wobbling back and forth when weakened or in heightened state of emotions; allies and enemies alike flop over and crash to the floor like a piece of cardboard accidentally knocked off a countertop.  Converstions use cute anime-style portraits that give additional details the characters’ pixelated models can’t quite copy, but everyone is readily identifiable either way. It’s hard not to smile at how adorable everything is.

As an amusement park, Heroland provides tours of historical places that King Rush ventured to in his youth to defeat the Dark Lord.  Caverns, lands of ice and fire, and even a candy-bedecked zone provide the backdrop for a variety of mock combat experiences.  At the start of each tour, Lucky can fill the party with up to four members, though most quests require at least one mandatory character, called a VIP.  Each tourist has a class, dictating their preferred role, though any character can in theory fill any role, just not as efficiently.  Tanks prefer hammers and draw monster attention; warriors use swords and focus on physical damage; mages wield staves and fling a variety of spells; healers utilize tablets to support the party by removing status effects and restoring HP; lastly, freelancers can perform most of the other four tasks with aplomb, though generally each will excel in either physical or magical roles.  For players that prefer specific parties, up to five formations can be saved and quickly assembled. 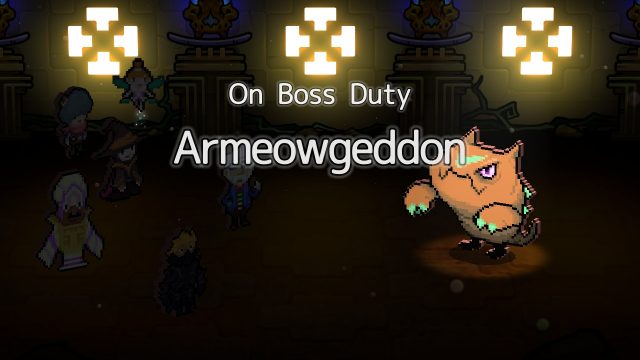 Dungeon bosses are the highlight of each run, offering the most challenge.

Once the tour group has been established and weapons selected, Lucky can fill his pouch with items before setting off into the mock dungeon.  During each combat encounter, the members will independently decide which of the three default actions to take — one is a personal skill, unique to the individual, while the other two are dictated by the equipped weapon.  The basic weapon skill can be freely, while the more powerful option and the personal skill each have a maximum of five uses per dungeon. Weapons have durability ratings, and the more one is used within a dungeon, the likelier it is to break.  Each party member has their own personality, which feeds into their attack preferences — Prince Elric will typically prioritise using his flashy personal move, the royal mage Leda aggressively focuses on using her weapon’s strongest attacks first, and the elderly knight Fortran, despite being a tank, prioritises healing.

As the unflappable tour guide, Lucky can direct his charges in two different ways.  One is the flag system, which gives broad group orders. These can include a target to focus on, encouraging or preventing the party using their strongest abilities, or guarding against powerful attacks.  Lucky can also guide an individual, directing the use of a specific attack or an individual party member to shield for an incoming blow.  Alternatively, Lucky can use any of the items in the explorer’s pouch, ranging from healing items to comics which buff the party, or plushie capsules that provide a temporary fifth party member to provide additional attacks or support.

While combat is in general fairly fun, it does run into a pair of issues.  First, the gameplay loop is short, and simply running story dungeons doesn’t provide enough experience to progress through the game on its own. Since every level counts, players will need to grind on previously completed dungeons to gain the needed levels.  Second, certain missions require unbalanced parties, such as requiring three healers in a party or no healer at all; while it’s possible to complete these dungeons either by special planning or simply out-leveling the content, removing the most interesting part of the game — party building — doesn’t add anything to the experience. 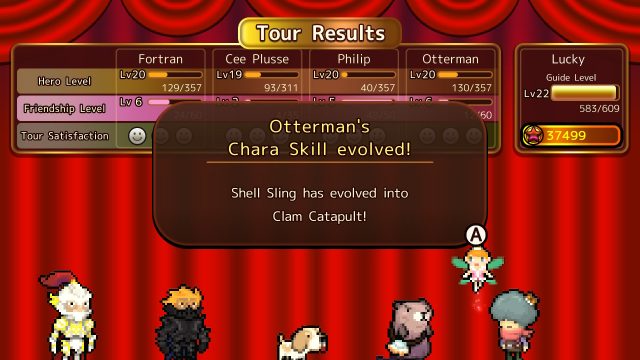 Increase the affection of heroes to power up their personal skills.

Once a party has been assembled, it’s time to enter the mock dungeons.  Dungeons contain appropriately-themed enemies, each of which has a chance of dropping a plushie; rare versions of some monsters are also available, which unlock the monster capsules Lucky can equip and use in combat. Some monsters also drop replicas of weapons used by famous past heroes, and once Lucky owns a copy of these replicas, they are unlocked for his party.  A treasure chest lies at the end of most dungeons that contains something for Lucky to decorate his tiny staff member room with. Dungeons have a fairly smooth curve of increasing challenge, with the exception of the final dungeon and post-game, which provide a strong jump in challenge.

As Lucky guides his party members through each dungeon, each character will slowly but surely gain affection.  Lucky can increase the amount of affection accrued by gifting party members drops from the monsters. Each character has their own likes and dislikes that determines whether a gift generates a huge boost in affection, or just a minor bump.  As characters raise in affection, special side quests unlock that provide additional insight into each’s motivations and tastes. At level six affection, each party member’s personal skill transforms to a more powerful version, and if Lucky maxes out their affection at level nine, they will give him a unique decoration for his room.

Outside of the dungeon, players can use their accrued loot of plushies, posters, furniture, and more to customise their quarters.  While this doesn’t add much to the game in terms of content, it adds a much needed and enjoyable respite from the game’s focus on dungeon crawling.  As certain pieces of furniture and plushies are more rare, collecting a full set of themed furniture or the perfect poster to adorn Lucky’s room can give much-needed motivation to return to completed zones. 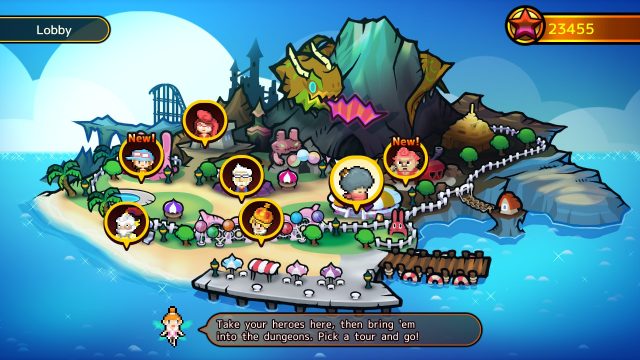 At the start of most chapters, multiple side quests will unlock — and they’re all worth doing.

The story of Heroland is where the game absolutely shines. The premise of the game is completely ridiculous — Lucky accidentally breaks an extremely valuable vase, and is forced to guide a spoiled Prince who is convinced Heroland is the real deal — and prides itself on taking itself not at all seriously.  The localisation is excellent, providing an incredible backdrop of puns, word play, and an effective mix of serious and silly moments.  The narratives both large and small are certainly the highlight of the experience and will no doubt entertain throughout the game’s forty hours or so of gameplay.

Less stellar is Heroland‘s music, which is the weakest part of the game. While it all fits, there’s a lack of variety in dungeon tunes, and since players will spend nearly all their time dungeon crawling, a bigger breadth of sound effects and music would have been greatly appreciated to prevent the repetition from becoming annoying.  The developer FuRyu has shown excellent music depth and breadth in past titles such as Lost Dimension and The Alliance Alive, so seeing this aspect of the game fall to the wayside is disappointing.

Heroland is a game that won’t be for everyone, as the gameplay loop is fairly short and the music as well as combat can quickly become repetitive, but it remains worth the price of admission.  It is ultimately saved by a strong, witty localisation that isn’t afraid to embrace the silly premise and run with it full tilt.  The game made me outright guffaw multiple times, and even when I was chasing a frustratingly rare drop, I was still having a lot of fun raising affection levels and crafting the best strategies for different party formations.  For those who don’t mind oft-repeated gameplay, there’s tons of fun to be found in Heroland.