As Fun as Watching Wheat Grow

I’ve been very hesitant about playing Natsume’s incarnation of Harvest Moon. This stems from the fact that I’ve constantly heard poor things about their first attempt: The Lost Valley. However, when Zach Welhouse posted a positive impression from last year’s E3, my interest in Harvest Moon: Skytree Village piqued. While I don’t think Skytree Village is a horrible game, it’s still not anywhere near the quality that Story of Seasons or Stardew Valley are.

Players take on the role of a young rancher who has recently moved to Skytree Village. Upon moving in, the rancher meets the Harvest Goddess who explains that the area surrounding Skytree Village was once lush and full of life, but is now desolate and bare. She tasks the rancher with the objective of reviving the seven Skytrees and restoring the hope that has been lost in Skytree Village.

It’s nice to see a very linear story in a Harvest Moon game and one that doesn’t take forever to get going. While this series isn’t really known for storytelling, it’s easy to give kudos to Skytree Village for making an attempt, even if it isn’t the most interesting or well-developed. Unfortunately, a lot of the writing in this game feels very corny, to the point where it’s cringe-inducing. The flow between story and gameplay also feels awkward, as there are so many tutorials for the first couple Skytrees that there’s almost too much starting and stopping for the game to ever hit its stride naturally. There’s a lot hand-holding at the beginning, and for veterans of the series it’s infuriating to say the least. 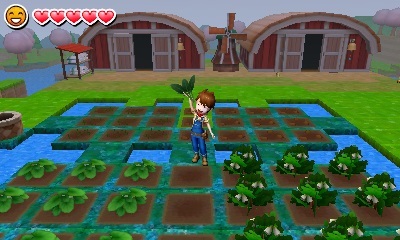 Check out my crops, yo.

It also doesn’t help that the townspeople are so flat, and this is partially due to the writing. Some of the characters either feel under-baked or overwritten. It makes exploring the town and making relationships feel sluggish. The game doesn’t provide enough of an incentive to want to forge relationships with these characters, which is a shame since that is a huge part of what makes Harvest Moon special. Trying to woo a bachelor or bachelorette for marriage is more of a chore. Players need to remember to talk to the potential candidate each day, even though their dialog doesn’t change very much, and worse off, players can’t marry their sweetheart until the main storyline is complete.

While the main narrative takes roughly twenty hours to complete, the post-game feels similar to the main campaign — bare. Although players can farm, build, and till land to their heart’s content, a lot of Skytree Village feels very shallow in terms of what players can do. It has the usual bells and whistles of fishing, mining, and animal husbandry, but newer incarnations of Story of Seasons and Stardew Valley provide more activities for players than Skytree Village. The only area that is fun are the festivals, which are very interactive and engaging, but those happen twice a month and more are unlocked once the first year is completed.

The gameplay is also a bit different, as all of the rancher’s tasks are mapped to the A button, unless the player is digging or tilling soil. Otherwise, it’s A button to fish, A button to destroy boulders, and it gets to be a bit hard on the thumbs. While it’s great to not have to open the menu to switch between tools, sometimes the interface doesn’t always read the player’s actions properly, as sometimes one might be trying to clean up horse poop and instead the game wants the player to pet their horse because it’s assuming that’s the command the player wants. Although this doesn’t happen too frequently, it is annoying when it does occur.

In spite of those problems, Skytree Village deserves praise for its sandbox environment. Similar to that of Minecraft, players can build and manipulate the land around them, and are able to move objects around. There is a plethora of vegetables and fruits that can be grown, meaning players can create larger farms. This level of customization allows the player to play and build within a set area, but it can be tailored any way they want. Given how flat a lot of Skytree Village feels, this is one of the few aspects that is done well. 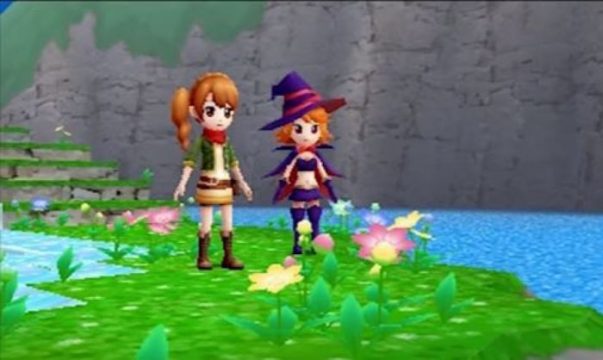 In terms of sound, there is no voice acting in Skytree Village, as is typical for these sorts of games. The music feels very quaint and idyllic, but also mostly forgettable. Visually, however, the game has problems. From object clipping errors to pop-in textures, and the overall visuals feel muddled. I had numerous occasions where my farmer would walk through the back of the cow she was milking and get stuck for a brief second. While every character certainly looks different and has very individual features, they still aren’t very interesting.

While I have spent most of this review ragging on Harvest Moon: Skytree Village‘s issues, I am glad I played the game because it satisfied my curiosity in regards to how Harvest Moon has changed in the last five years. While there are inklings of interesting ideas, the overall package feels hollow, as though it’s missing a spark of greatness where other games have succeeded. Skytree Village doesn’t offer enough incentive to keep players actively engaged, and I can only hope that the next iteration of the series makes some drastic changes to get this series back on track.