After reviewing two other Harvest Moon titles previously, you’d think I’d be sick of these games already. The problem is that Harvest Moon games always seem to have one major addictive quality about the gameplay that changes between each game, and always manage to keep me coming back for more. The question remains, however: does Harvest Moon: Grand Bazaar, the nineteenth entry in this long running series, follow through with being addictive?

Players take on the role of a new male or female rancher who has just settled in Zephyr Town, a place that was once known for having the grandest bazaar in the entire world. Unfortunately, years have passed and the bazaar is barely able to keep itself afloat, so it is up to the player to revive Zephyr Town and its bazaar, returning both to their former glory.

It’s difficult to judge Harvest Moon games based on story, because the minimal plot leaves little to discuss. Unlike Sunshine Island or Hero of Leaf Valley, Grand Bazaar‘s story is so bare-bones that it’s hardly worth mentioning. Many of the characters lack the quirky charm of previous titles, making courtship challenging because none of the bachelors or bachelorettes have any traits that make them at all desirable to woo, which is disappointing considering how important marriage is in Harvest Moon. 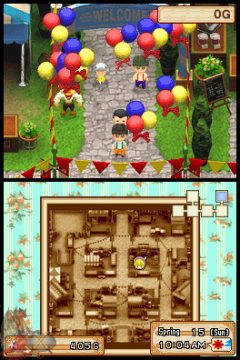 Welcome to the Bazaar!

Much like past titles, farming is still an integral part of the game, although like Hero of Leaf Valley, seeds must be bought and planted one at a time, as opposed to Sunshine Island where one package of seeds sows multiple areas. The reason for this is because each crop has a quality value that can be raised as more fertilizer is placed upon it. Animals produce products typical to the species, such as chickens giving eggs, cows giving milk, and sheep offering wool. Everything in Grand Bazaar has a quality value and the better the quality, the more money it fetches at the bazaar each week. The bazaar itself is a unique feature that replaces the shipping bin, thus encouraging players to save and create their own items to sell each week.

Grand Bazaar also has a new crafting system, wherein players can use the windmills all over town to create new items just using raw materials they have farmed or found throughout the town. For example, cheese is created by putting milk inside the windmills. Each item that is created takes a specific amount of time to complete, though the process can be sped up if players blow into their DS microphone to spin the windmill blades. This feature is easily one of the most accessible features to appear in the DS iterations of the Harvest Moon games, and is also one of the more enjoyable ways to craft items. There’s no need to worry about wasting raw materials because there’s no way to fail during the processing. Using the windmills is crucial to netting the best items possible since rarer items earn more money at the bazaar.

Speaking of the bazaar, this titular aspect is easily the highlight of the game. Every week players have the opportunity to peddle goods that they have farmed or created through cooking or via windmills. There’s a weekly sales goal that must be met for several weeks in a row in order to improve the Zephyr bazaar and unlock new shops and features for the town. These goals are very tricky to make within the first year, but there is no time limit or “lose” scenario in the game. The goals will simply remain the same until you are able to meet them. This makes the pacing in the game very slow, even for a Harvest Moon game.

One bizarre bazaar feature is that most essential items for farming can only be purchased on bazaar day. This means that if the player is short on money on bazaar day, it’s tough luck for purchasing most seeds, animals, or other important items until the next week. It’d be nice if the game offered one day for selling items and the next day for shopping with the resulting profits, especially considering how little money players start with in the first year. Because of the once-a-week shopping limit and early money shortage, players will often have to choose between upgrading their farms or buying farming essentials, which contributes to the game’s slow pace. 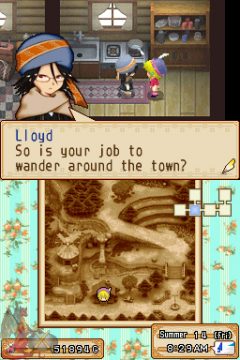 Harvest Moon: Grand Bazaar adds one more new feature: characters can now jump to higher areas on the map. Players can use this new feature to leap to higher areas for collecting bugs, ore, and other treasures such as coins. Being able to jump also allows players to land in bodies of water to collect other items, though it’s random as to whether or not things will be gathered. Every time the player jumps into the water, stamina is lost, though just jumping from place to place costs no stamina. This feature is very helpful for shortcuts to certain areas, which is a nice bonus on bazaar days when players have to move back and forth to their storage bin on their farm to gather more items to sell.

Festivals have also been modified in Grand Bazaar to provide more interactive experiences. There are three new festivals added to the game, each with specific requirements for participation. However these new festivals are not that interesting, particularly the Flower Festival wherein you spend five days giving out flowers to everyone in the town. Other events, such as the tea and wine festivals require the player to make tea and wine and… that’s it. These festivals are barely creative, nor are they fun to participate in. In fact, they feel more like time wasters than special days to earn more friend points (FP). There are more interactive occasions such as the horse races, but most of the festivals are stock events that require players to make an item and watch the event play out.

Much like the previous Harvest Moon DS titles, Grand Bazaar continues the trend of cute, squishy looking 3D characters and good-looking environments that pop off the screen. Unfortunately, the visuals lack the smoothness found in the far crisper and less pixelated graphics of Sunshine Island. Soundwise, the game’s music is irritating and sounds like something out of the Smurfs. It’s cheerful and teeth-rotting, lacking any sense of variety. Sound effects in the game are also horrendous, as most of the characters simply sigh or laugh, but they sound more like they are in pain, making it awkward and out of place. The music and sound are so terrible that it’s probably safer to turn the sound off and listen to something else.

While Grand Bazaar can be considered a solid entry to the Harvest Moon DS titles, its problem is that it doesn’t really do anything new other than the bazaar. While the bazaar is a nice feature, it’s the only exciting addition made to the game that’s worth noting. There are lots of collectables and items to craft, but again, there’s not much staying power with this particular entry. Those looking for something new in the Harvest Moon universe may only find minimal enjoyment, and those looking for major creative improvements to this long-lasting franchise certainly won’t find it here.