Harvest Moon: Back to Nature is considered to be one of the best titles in the franchise. Although the series has grown since its release in 1999, it’s interesting to go back to an older iteration and see how a series has evolved from its more primitive stage. While the boy version of Back to Nature released, Back to Nature for Girl did not see the light of day in North America until 2007 when Natsume brought over Harvest Moon: Boy & Girl for the PlayStation Portable. But was the localization of the girl’s point-of-view worth the wait?

Harvest Moon is a series not really known for plot, yet Boy & Girl offers two slightly different narratives depending on the selection of gender. If one starts as a boy the story begins with the protagonist reminiscing about visiting his grandfather’s farm in Mineral Town and then taking it over after his death. Choosing the female lead begins with her meeting a man on a ship, hearing how wonderful life can truly be, and then the next minute being shipwrecked. Washing ashore, our heroine enters Mineral Town and begins her new life as a farmer. For the purpose of this review, the focus will be on the female playthrough as this is the first time it has seen localization.

Localizations in 1999 were fairly hit or miss. However, in 2007 when Boy & Girl released, not much has really changed. The localization for Girl in particular lacks any creativity, has a few typos, and overall makes the plot elements fairly forgettable. This is disappointing considering that some plot events are supposed to feel exciting and vibrant, and Natsume offers nothing to the table to bring the girl’s story to life. While there’s not much to work with in terms of the bare-bones story, most people play Harvest Moon for the courtship and rival marriages. Considering how ironic the Mineral Town characters are in other iterations, there’s no excuse for the bland localization. 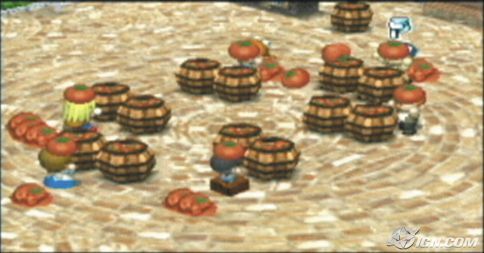 However, all is not lost in terms of the plot. While the localization is uninspired, one thing that Girl has over Boy is the inclusion of multiple endings. If the perky heroine marries someone in Mineral Town, she is given a happy ending. With five different bachelors to choose from, this offers quite a variety of conclusions. There are also tons of festivals in the game which are quite interactive compared to some of the later games, and the role changes in some of them when playing as a girl. These additions do provide enough content to keep the player busy and give some great goals to work towards.

Speaking of goals, the main one is to revitalize the farm itself. Farming and raising livestock continue to play a large role in the core gameplay. Players will sow seeds on 3×3 grids, with nine seeds per plot. Tools are upgraded via the blacksmith when presenting him with new ore which can be mined. These upgrades can take days at a time, making a specific tool unavailable until the improvement is complete. It also doesn’t help that the amount of activities feels downsized when compared to newer games within the franchise. Thankfully, festivals are fairly interactive in the game and are very frequent.

While the festivals are frequent, so are the game’s technical flaws. Load times are long and numerous, concurrent with abundant slowdown. This makes for a very slow and tedious experience when playing the game on the PlayStation Portable. It’s highly noticeable and awkward when players are doing tasks and then slowdown occurs in the middle. The interface itself is also quite limiting, as the stats all appear on a different screen. It would have been great to have a health and stamina bar on the main screen so that players can check with ease if they are running out of either instead of clicking to another screen frequently or just waiting for a farmer to collapse. It would also have been beneficial to have a status screen to find out what the farmer’s relationship is to the townspeople. While bachelors and bachelorettes have colourful hearts to show their affection rating, it’s difficult to know where one stands with the rest of the townspeople. These little improvements could have made the game much more accessible and a lot less monotonous. 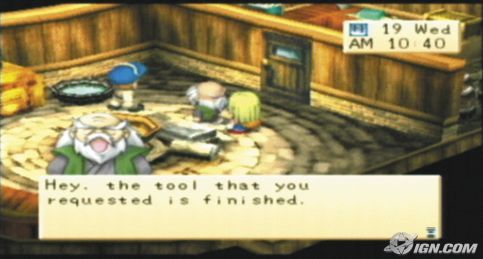 Considering Boy & Girl is a port of the PlayStation game Back to Nature, graphically it’s exactly the same. The graphics are crisp and colorful, much like what the series as a whole is known for. The sprite work is good, though the asset age is noticeable without becoming an impediment. In terms of music the game sports the typical sounds of the series: cheerful tunes that are completely forgettable. In fact, the amount of music is fairly minimal compared to later games in the series, but the tracks are corny and don’t stand out in any way.

Boy & Girl is an example of trying to revisit a classic, but making it technically inferior to the original. While it’s not a bad Harvest Moon game, it hasn’t aged well and the PlayStation Portable version adds new problems that didn’t exist prior. However, Back to Nature does provide a sense of nostalgia for those curious about the earlier games, and the Girl version does add some variety to keep the game from being one giant loop. Still, it’s not as strong as later titles in the series, nor is it exciting to play with all of its technical problems. While it’s exciting to see Harvest Moon‘s roots, this version should probably be buried in the soil.